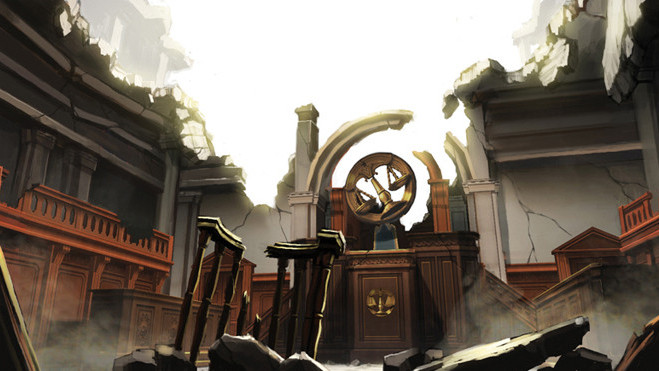 Your honor, the decision of whether or not to play Phoenix Wright: Dual Destinies is hardly worth musing over for long. Mr. Wright and his companions have seen much of the sun, and have become blinded by feigned glory and sheltered affection. They return to the stand worse for the wear.

Their latest outing operates within the same tried-and-true format of previous adventures, and does little to inspire returning to the stylus odyssey. New characters only wear slightly different masks to distinguish themselves from earlier incarnations of hero, villain, and buffoon.

The evidence proves a severe lack of innovation: a retreat into what is known, expected, and overplayed.

Your case is brimming with inconsistency! Phoenix Wright: Dual Destinies is the first game of the series to feature fully scaled polygonal character models—in 3D, at that—adding an enticing level of charm to classic pointy-finger gestures! The added dimension gives a nice pop to investigations when finagling your way around crime scenes, hidden corners, and evidence.

A new protagonist, psychoanalyst Athena Cykes, brings an emotionally intuitive special power, harnessed by the “Mood Matrix,” to the courtroom. Cykes can hear hearts, and the Mood Matrix is used to psychoanalyze emotions from witness testimony, uncovering hidden elements of the truth and dispelling gender-bending contradictions.

The game introduces minor psychological conditions to be treated, including schizophrenic images brought on by fear and trauma. One could say Dual Destinies is an interactive substitute for that egotistic high school psych elective. You might even get a boost in your vocabulary!

How dare you accuse the reader of having a limited education! Might you suggest they harbor an extraordinary nescience?

Absolutely not! Could the prosecution define “nescience?”

Hmph. The prosecution has no interest in teaching what should already be known. Perhaps the defense should consider returning to school before crossing swords with advanced criticism.

Regarding the so-called innovations of Dual Destinies, the Mood Matrix is simply a rehashed version of the same investigative counseling that has been seen since the first Ace Attorney. At heart, you are still searching for glaring contradictions! In actual court, would any witness’ testimony be banged upon time and time again before finally hitting the nail?

Dual Destinies forces the player to often take shots in the dark to proceed. If you’re ever stuck, the game’s crimes come into focus: select random piece of evidence, receive penalties—annoying hiccups, at best—restart your save file, and repeat.

Your honor! The prosecution fails to see the greater picture. The Phoenix Wright series has never been about perfect gameplay or realism! Dedicated players return to the franchise to connect with invigorating characters, wondrous mysteries, and tantalizing story twists!

At heart, you are still searching for glaring contradictions!

Allow me to present my final piece of evidence: the game’s admission to overturning a dark age of the law. While at times the phrase is a throwaway plot point, the defense suggests that Dual Destinies is attempting to send out positive messages and hone their players’ critical thinking skills. The game outlines the growth between honest opposition, and the value of each role:

“We prosecutors painstakingly question every detail in pursuit of the defendant.”

“While we lawyers believe in and defend our clients to the end.”

“When both sides go all-out against each other, that’s when we discover the truth.”

Your words are polished, and strike with the flame of integrity. The defense claims that both perspectives are essential in reaching a verdict, and the prosecution is in agreement.

However, the linearity of the story remains my only remaining gripe. This is a game that begs for multiple endings. If failing in certain instances lead the player down different paths—as in, for example, L.A. Noire—and resulted in multiple endings to cases, the tension behind receiving penalties, and solving the case, would be likewise much stronger and more satisfying.

To play Phoenix Wright: Dual Destinies is to participate in wildly entertaining courtroom antics, more akin to Who Framed Roger Rabbit than Law & Order. While the gameplay remains stilted from previous incarnations, enough new strategies and tactics are introduced to keep an almost-dead horse on life support.

The associates of Wright Anything Agency have bluffed their way into my heart, and convinced me—in light of near-damning evidence—that their magical world is a client worth defending.