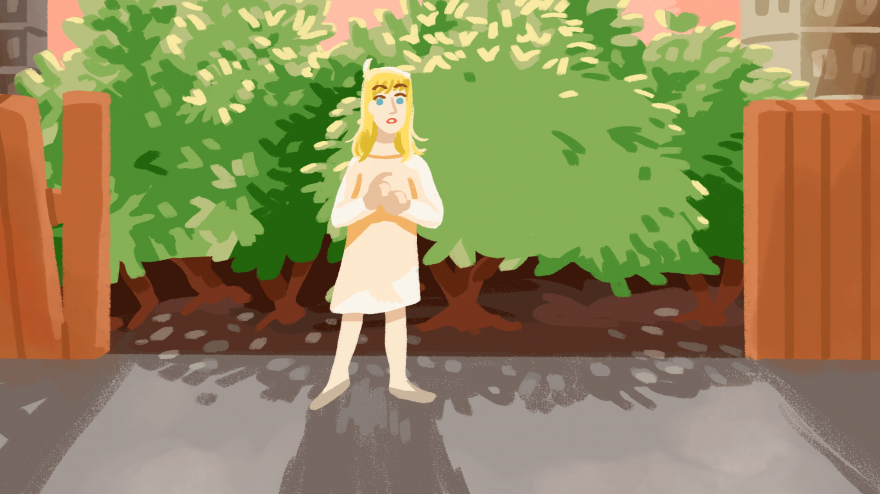 Game designer Nina Freeman first rose to prominence with How Do You Do It (2014), a game exploring precocious sexuality based on her own experiences as a child. The following year, her senior thesis project at NYU-Poly was commercially released as Cibele, a game about online gaming, sex, and falling in love on the internet. Interested in themes of sexuality and self-reflection, Freeman currently works as a designer at Fullbright.

Freeman’s latest project, Kimmy—made in collaboration with Laura Knetzger and Aaron Freedman—shifts the focus to childhood. Based on her mother’s experiences as a babysitter in the 1960s, Kimmy will explore what it was to be a child before the advent of smartphones. Player character Dana is tasked with babysitting the eponymous little girl, Kimmy, who undoubtedly has a lot to teach them both about responsibility, friendship, and family. Over the course of one summer, Dana will help Kimmy collect trinkets to play street games and make friends with the other kids in the neighborhood. In the process, Dana will learn more about Kimmy and her situation at home. Freeman discusses Kimmy’s themes and influences with us in the Q&A below.

Kill Screen: What made you want to team up with Laura Knetzger? What’s her role and what does she bring to the project?

A year or two ago I started working on this game called Freshman Year and was looking for an artist and I thought of Laura. She and I had met at this Ghost Pokézine party in New York City—she had a piece in the zine and I thought it was really great. So, we chatted at that party and kept in touch! Her, myself and Stephen Lawrence Clark teamed up to work on Freshman Year. Laura did the art for Freshman Year entirely using gouache paint and I thought that was a super interesting idea! I always wanted to work with her again after that.

We had a lot of fun making that game together, so I am really excited to be working with her now on Kimmy. It’s especially exciting to have her as my co-writer, because her writing work in her comics is really great. She also made this game I really like called Don’t Go In The Old Greene House, and the writing in that made me think she’d be a super good writer to collaborate with.

KS: I know you have a somewhat contentious relationship with your mom. What made you want her insights for this project in particular? How has that been going?

Most of the games I’ve worked on in the past have been about my life experiences. However, I’m also really excited about finding other people’s stories. So, I’m always looking for people who are open to telling me a story and letting me ask them questions about it—I really like doing interviews and research in this way.

My mom has always been pretty open to this, so whenever I visit her I ask if she’s got any new stories for me. She grew up in a sort of urban area in Massachusetts in the 60s, worked lots of weird jobs, and is happy to let me pick her brain about this stuff. I have all these notes on my phone full of different stories she’s told me about her life that I’ve written down—I look there frequently for new game ideas.

The idea for Kimmy came from one of these conversations. I think we were driving around and I was asking her what kinds of street games she played as a kid, and that reminded her of the summer she spent babysitting this one little girl. So, she told me briefly about what it was like babysitting that summer and about how this kid had kind of a weird family situation. I wrote all this stuff down and then called her a couple weeks later to record an in-depth interview about this story, and that’s what Laura and I are using as reference while we write Kimmy.

Kimmy is a game that’s all about kids, making friends, babysitting, responsibility, family turmoil … these are all timeless, in a way. However, it’s also about street games! Kids still play street games, but I don’t think you see crowds of kids out in the streets wandering around alone and playing as much as you did back then.

So, since I really wanted to focus on street games as I was working on designing the game, I knew I needed to stick to a time period during which it would make sense for all these kids to be outside playing together in different parts of a semi-urban neighborhood. I also like to be as true to my source material as possible. Since my mom grew up in the 60s, and this game is based on something that actually happened to her during that decade, it made a lot of sense to set it during that era.

KS: Did you have your own “Dana” experience?

I didn’t babysit to the extent that my mom did as a kid. I have two little brothers, so I’d babysit them from time to time. But my mom really babysat a lot of the kids in her neighborhood and made money that way as a kid. She tells me that she was very serious about it. She needed those quarters to buy snacks and other stuff! I never really had anything like that. I did spend a lot of time playing games with my friends outside, but not in the same way.

For Kimmy, I’m mostly drawing on my own experience as I write the character dialogue. The player spends a lot of time getting to know the other kids in the neighborhood, learning about their lives, and having these little conversations with them. Some of that draws on my personal experience, and conversations I remember having as a kid, and kids I remember meeting. However, most of the game, and especially the core story, are really drawing from the interview I did with my mom. I asked her a lot about what life was like for her during the specific time. Who were her friends? What was it like to ride her bike into Boston? What was it like being a majorette? How was she treated at school? All this stuff, in addition to the specifics about Dana and Kimmy’s time spent together, informs the game and the characters.

KS: Were you at all inspired by Chop Suey and other Theresa Duncan games?

I wish I’d played them! But I haven’t, so I can’t say I’m being influenced by them. I think my biggest influences for Kimmy are games like Cart Life (2011), Papers, Please (2013), and also visual novels. The game isn’t really a visual novel, but it resembles that format in some ways and certainly draws on that tradition quite a bit.

Kimmy will be released for Windows and Mac in 2016. You can find out more on its website.