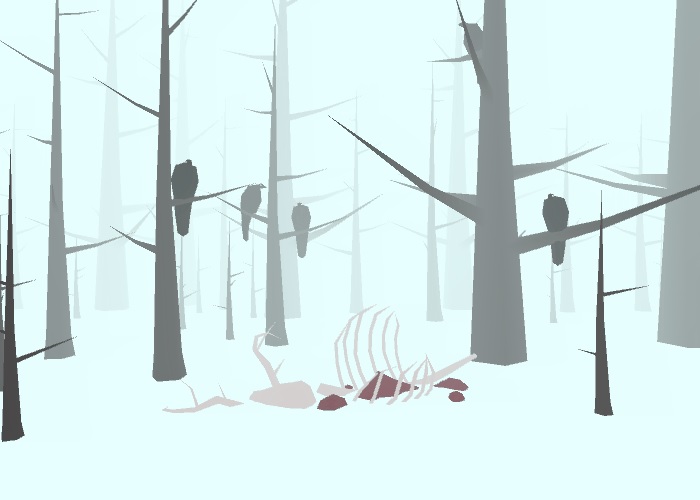 Narayana Walters, a computer science student at Appalachian State University, is fed up with seeing the same old designs in horror and survival games. But rather than sticking to moaning about it, Walters is doing the admirable thing of making his own: a non-linear, open-world survival horror game called and thus.

While it may be a little much to call and thus a reinvention of the survival horror template it does strike you at first glance. From what he has outlined on the game’s TIGSource thread so far, there are no zombies, no guns, none of the usual sights that might immediately turn you off the game if you, like Walters, can’t stand any more clichés.

Instead, Walters leads the way with a swaying GIF set in a wintry forest, crows stilling motionless on the branches, a carcass stripped to the bone and half-buried in the snow below them. It’s a menacing little snapshot of the game with smacks of Simogo’s first-person horror adventure Year Walk (2013) about it (you should play that if you haven’t already, by the way).

“something bad is about to happen”

In fact, the comparison to Year Walk could go a little further, as and thus will also be played from the first-person perspective. Walker also writes in the TIGSource thread that the game will focus on “mystery and the supernatural to invoke ‘scariness’ rather than gory, obvious monsters.”

Year Walk did something similar as it took directly from Swedish folklore, inhabiting its own forest with peculiar and frightening creatures, most memorably, the Brook Horse, Mylings, and the Night Raven. In fact, and thus seems to almost have its own version of a mystical raven, as seen in the GIF below. “When the harbinger appears something bad is about to happen,” writes Walker alongside it.

The only other aspect of and thus that Walker has shared so far is the dungeons. You will apparently come across a few dungeons as you explore the forest, and while they can be avoided, at some point you will have to head inside one. The one that Walker outlines is pitch black, and so you have to navigate it using tiny lights, trying to piece together a code that you enter into a terminal to escape.

Sound plays a huge part in this dungeon. The fragments of code you’re after have a distinct noise that you’ll be able to follow in order to find them, and so does the terminal. However, you’re not alone in that dungeon, and so you’ll also be able to hear the sound of the creature stalking you. If you hear it get close to you, you’re able to outrun it by sprinting, but this introduces more problems as your character will breathe heavy and that muffles the other sounds.

The design of this dungeon follows the two simple survival rules that Walker is applying to his game: “If it looks dangerous, it is. If it’s dangerous, run away/hide.”

Look out for updates on and thus over on its TIGSource thread. You can find out more about Walker on his website.