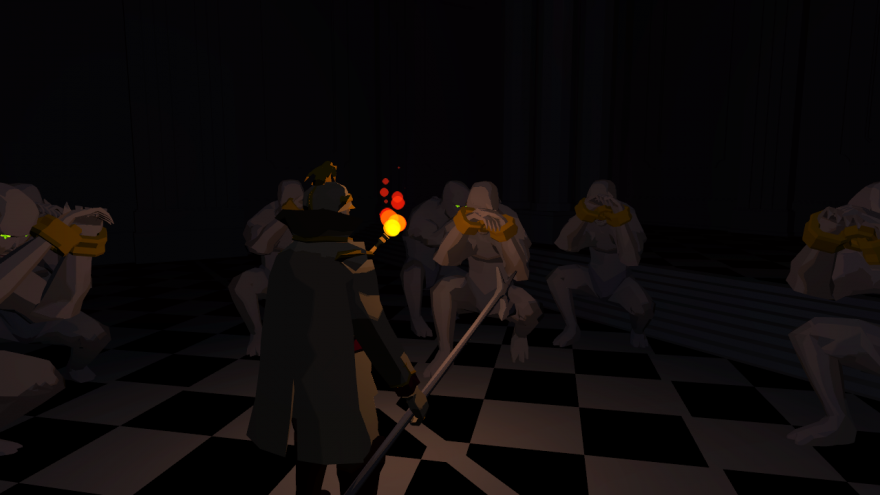 “As you walk through the main entrance of the base, you hear animal-like growls echoing throughout the distant corridors. They know you’re here. There’s no turning back now.” – from the Doom README. file, 1995

Id Software’s “Doom” consolidated the design of the first-person shooter back in 1993, with it spawning enough phantom software for the term “Doom clone” to arise. Those taking from Doom focused on the most rudimentary, easily-copied ideas including the first-person perspective and the maze-like level structure. What wasn’t passed on, much to my bereavement, was the game’s fascination with demonism, and its Lovecraftian sense of horror.

In Doom, you travel from a solid steel radioactive waste facility on Phobos to an arcane Hell dimension, blasting the series’ iconic monsters along the way. Notably, Doom‘s hellscape isn’t a generic recreation. It’s entrenched in mystic symbolism, H. R. Giger-esque cyber-flesh textures, and torture practices derived from Dante’s description of “Inferno”. This is an Old Testament vision of Hell: the level names take directly from the Bible with phrases and places such as “Thy Flesh Consumed,” “They Will Repent,” and “.

All of this has been washed aside by videogames over the years, which instead took root in Doom‘s barely present future science and the marines sent in to clear up the mess. You can see how this line of influence wound up by watching the awful 2005 Doom film which, instead of drawing from the Old Testament and occultism, explained its monsters as a biological accident. Yeah, another boring science scare. Yawn.

But, apparently, it hasn’t been completely lost. Jochen Mistiaen’s cel-shaded horror adventure Malebolgia seems to be arriving from an alternative dimension, one in which Doom‘s beastly horror and not its military brashness became the lead line for game designers throughout the years. Let’s be clear: Malebolgia doesn’t take from Doom at all, what it does is eat from the same monstrous plate.

This is clear from the title alone. “Malebolgia” refers to the demonic palace that you escort the battle-weary Leopold through with only a flickering torch to hand, and a firm grip on the hilt of his weapon. In the Divine Comedy, Malebolge (translated from Italian as “evil ditches”) is said to be the eighth circle of Hell, and inside it are the ten ditches where each category of sin is punished for eternity.

horror that has gnawed at the fears of god-fearing folks for centuries.

In fact, Dante’s “Inferno” seems to have been used by Mistiaen as a blueprint—or, rather, Gustave Doré’s disturbing illustrations of Dante’s descriptions—it ascribing evil to the snarling archways, ribbed vaults, and looming staircases of Malebolgia‘s multi-tiered gothic palace. There are even enslaved over-sized humans huddled up inside the darkness, bound by golden wrist braces, hiding from the overwhelming light of Leopold’s torch. They might as well be sinners starved of light by the demons whose purpose it is to lash and sear them.

If the architecture and slaves weren’t obvious enough, then the titles given to the fearsome demons that attack Leopold make the reference to Inferno clear. One screenshot shows a demon with hulking shoulders for swinging a heavy sword, who is called “Baron Dullahan of The 8th Trench.” This, and the other demonic titles in the game, is derived from the ranks and nobility of the 72 demons listed in the “Ars Goetia” section in The Lesser Key of Solomon.

If you didn’t know, it’s the “Ars Goetia” that was edited by the “wickedest man in the world” and dark magic occultist Aleister Crowley back in 1904. would have appreciated and embraced Malebolgia‘s intensely desolate darkness, and its invitation into the menacing pits of demons. There’s a morbid fascination at the heart of its horror, one that Crowley shared, crafted by Mistiaen out of the haunting details of ancient texts.

This is a horror that has gnawed at the fears of god-fearing folks for centuries. In Malebolgia, it is given cel-shaded form, the textures left out for practicality’s sake, but also—as Mistiaen previously told us—to allow for the creepy ambiguity of “shapes, silhouettes and colors, instead of close details”, which allows him to “use darkness to create atmosphere while hiding (lack of) detail.” Malebolgia‘s strength seems to be found it its thick engrossment in the atrocities of Hell, but also in leaving the details out so that we can fill them with our own imagined terrors.

We’ll be granted entry to Malebolgia’s demon palace on PC this winter. Check out its website for more details.