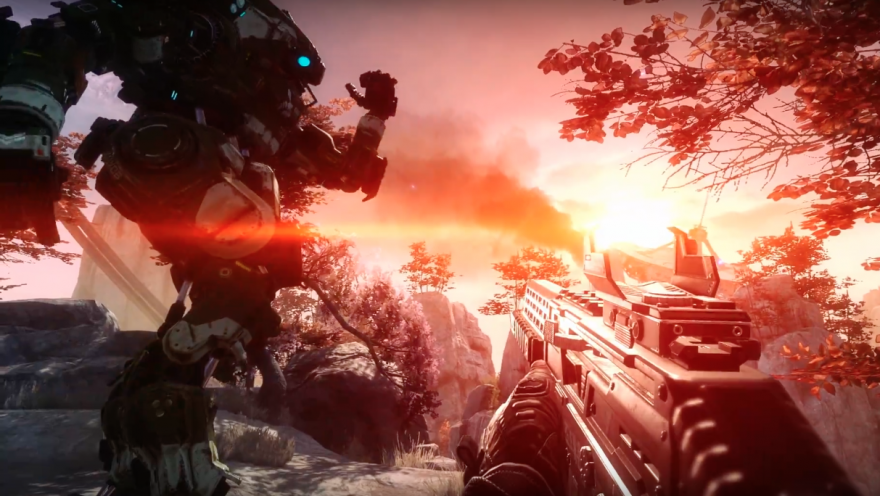 Though a thin game in terms of what it offered overall, Respawn Entertainment’s Titanfall (2014) was a well-balanced, quick-paced multiplayer shooter in a time where run-of-the-mill Call of Dutys and Battlefields ruled, with not much else to spare. But one of the largest grievances from fans of Titanfall was not only the sparse diversity of its multiplayer modes—but its entire lack of having a single player campaign.

In the newest footage of its follow-up Titanfall 2, revealed during EA’s press conference early Sunday afternoon, Respawn finally confirmed that very inclusion (even if the trailer did leak earlier than expected).


In the single-player trailer, a (non-sentient, according to an interview with Polygon) mecha bemoans his former pilot dying. He seems sad about it, or at least, as sad as a cognizant mecha can be. A new pilot—a riflemen who goes by the most generic of names: Jack Cooper—is the mecha’s new lifelong companion in shooting bad guys and fighting monster things. A disembodied woman’s voice barks at the mecha, asking why the robot paired with another human without running it by her first. To which it gravely replies, “We had no other options.” Because, you know, war and monsters probably. The trailer then shows some more human x mecha bonding, maybe falling deeper in love with one another, culminating into some good ol’ pilot hopping into mecha and shooting things action.

Is there true love between this unlikely pair?

There’s more heightened action in the trailer, like Cooper falling in an endless sky BioShock Infinite-style and the mecha saving him in the nick of time. There’s more shooting things, because at the crux of it all, that’s where Titanfall shines. (It plays well.) But in so many contextually-dry multiplayer-heavy games, the concept of a mecha and a pilot is perhaps the most fruitful to expand. It’s not just another war game, or a tone-deaf cops versus robbers romp.

It’s doubtful that Titanfall 2’s story will hit the heights of other mecha-addled tales, such as Hideaki Anno’s blissfully dark Neon Genesis: Evangelion (1995). Nonetheless, it’s a welcome change to what fans and critics saw as an issue with the first game, and remedying that by actually exploring the relationship between a pilot and their killing machine buddy with a programmed mind of its own. Like, is there true love between this unlikely pair? Is it just a solid friendship, complete with the pilot remarking, “Man, you really shot the hell outta that guy” with maybe a subsequent fist bump? Or is the mecha simply just programmed to the beck and call of its human companion, without a genuine feeling beyond that? I suspect we’ll find out in Titanfall 2’s campaign, when the game launches in October.

Titanfall 2 will be released on PS4, Xbox One, and PC on October 28th.