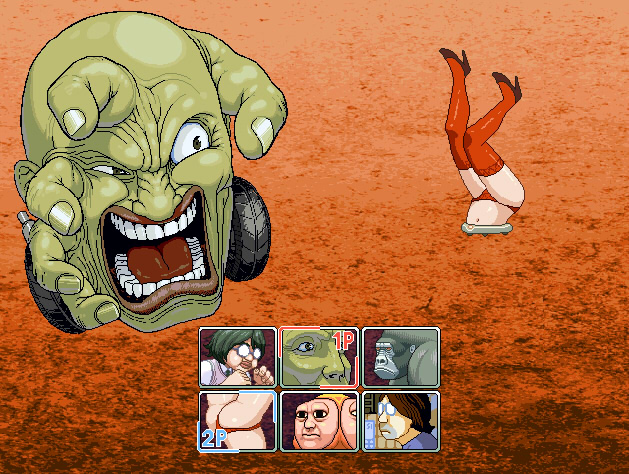 With as little hyperbole as possible, Oneachanchan is one of the coolest, craziest fighting games ever seen. Created by manga artist “daromeon,” known for his Kengan Ashua series (2012), Oneachanchan has been in development in one way or another for nine years. “I started drawing the sprites back in 2007 to make a fighting game together with my friends,” daromeon tells me, though explains that project fell dormant for a bit. Three years ago, he decided to pick it back up.

Oneachanchan, daromeon says, is his outlet to freely create things he likes, something he’s not always able to do with the Kengan Ashura series, which is written by Sandrovich Yabako. The game tells the story of an arguing family, with each character representing a family member. The main character, Oneachan, is the eldest sister, the gorilla is the family pet, and the giant green head, Ohjeachan, is the father.

the gorilla in the game is not Harambe

What makes Oneachanchan standout is its character animations, which are strange, eye-catching, and often out of this world. Daromeon cites influences such as the film and anime series Akira (1982 and 1988, respectively) and the anime Neon Genesis Evangelion (1995). He also points to games such as Street Fighter III (1999), and modern artists Terada Katsuya and Aida Makoto. But, perhaps most interestingly, daromeon cites his time restrictions.

Because Oneachanchan is being developed in his spare time, daromeon says, “[character animations are] designed to have the maximum visual impact with the minimal amount of work possible.” For example, Ohjeachan uses tires and propellers to move around rather than “complex movements of legs and arms,” daromeon explains. These animations are copied, and applied to other moves.

There’s a few things daromeon wants people to know about Onechanchan: Firstly, as people have asked, the gorilla in the game is not Harambe—a gorilla recently killed at the Cincinnati zoo after a child fell into his enclosure. “I can’t lack too much common sense [to] be riding on such a sad sad incident,” he says. Secondly, he wants to thank anyone from overseas who has reached out to him with compliments. “I feel my diligent effort [over] the past three years—nine years, if counting from 2007—has been paid off,” he says.

Lastly, and most importantly for daromeon, he sees videogames as a “concrete tool to [facilitate] communication between people with different cultures and languages.” He says he’s proud that he and his game have been a part of that, even if it is only a small one.

There’s currently no release date for Oneachanchan, but daromeon says when the game does come out, it will be completely free. You can currently try out the game, though he doesn’t guarantee this pre-release build will work. To keep up with him, follow daromeon on Twitter.