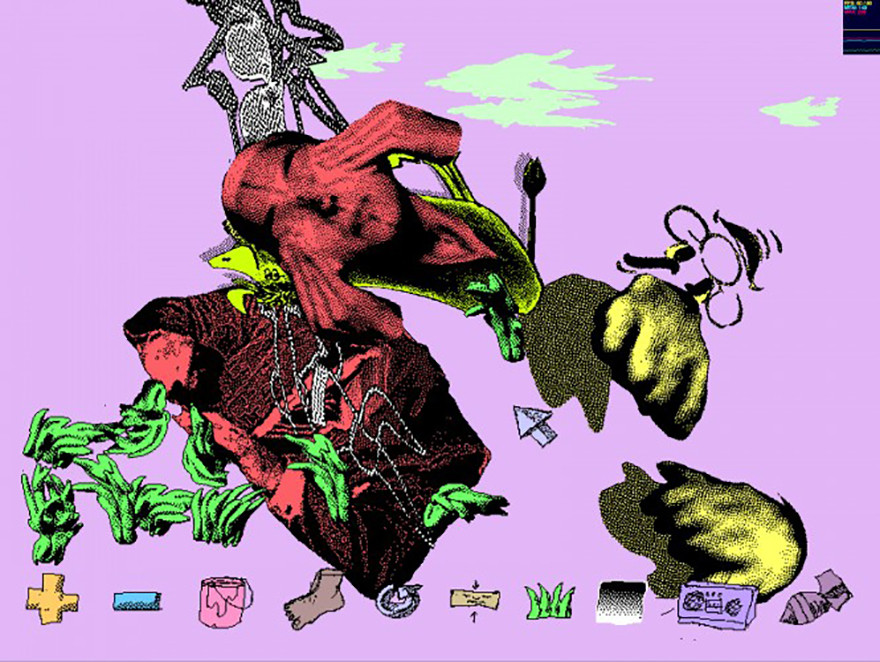 Mason Lindroth’s animations exist somewhere between the realm of a hellish nightmare, surreal art, and collages. It’s all those things, and also none of them. Lindroth’s repeated animated aesthetic is wholly unique—there’s nothing else like it (and in fact, he even hand-sculpts some objects from clay). And that’s why when he does something as “trivial” as VA DA, a new “animation/drawing program,” it still resonates. It’s wild and bizarre, like so many of his other works before it.

VA DA, as described above, is a simple “drawing” program. You control a space with your mouse, and drop in randomly generated items. You can change the color of the background, of the items, and even make the objects walk around on their own. The objects themselves are grotesque, ranging from eerie blank-staring faces to vintage stock-like footage of families. Nothing blends together, it becomes a distorted conglomerate of gif-able lo-fi clipart. While it may be a drawing program, it hardly has any actual player participation. You’re tasked to just sit back, and casually create your own randomly generated Lindrothian art.

Lindroth’s created nearly a dozen bite-sized game jam titles. His most developed game is Hylics (2015), a two-hour long JRPG-like experience; a delightfully weird and clay-filled adventure. In an interview with Kill Screen last summer, Lindroth described the game’s use of randomly generated text. “The player’s goals are communicated visually, by the environment design, so I felt free to make the textual aspects of the game into a sort of joke or red herring,” said Lindroth. “Everything else is there to present a certain atmosphere.” The same can be said for VA DA—or rather any of Lindroth’s games—the environment design is the focal point, everything else just falls into place around it.

VA DA was created for the 35th Ludum Dare, a themed semi-annual game jam competition. April 2016’s theme was “Shapeshift,” a theme that Lindroth realized in a notably complex way. The objects don’t necessarily shapeshift at the player’s behest, but instead move on their own. The shapeshifting isn’t at the forefront of VA DA, instead it’s in the background, shifting on its own without a care for player input.

Create your own Lindrothian nightmare in your very own browser here.