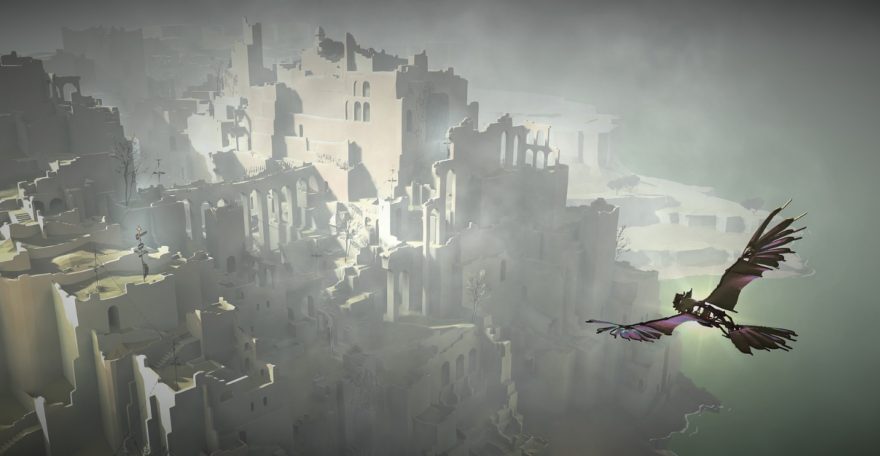 A cold wind blows around the stony ramparts of an old, crumbling fort. A young girl in a red dress lies on her belly, seemingly asleep in the grass, black hair fidgeting with the breeze. The electrical wires hanging between tall mechanical pylons also shake to the chorus of the grey gale. The new teaser for MARE, an upcoming “exploratory and sensory VR adventure” by Visiontrick Media, starts with several slow shots of its environments and characters. According to Rui Guerreiro the point is to introduce MARE as a game of subtle contrasts.

It’s a game in which you help the little girl journey through a mythical world that is “lost in time and space [and] filled with untangled mysteries,” with no clear goal other than to keep moving forward. To do this, you need to help her control a mechanical bird that she feels attached to for unknown reasons. You have to steer it between the electrical pylons scattered through the land. This idea came directly out of the game’s format as a VR game that is controlled by the player’s gaze—specifically, where they tilt and turn their head towards.

“We tried to utilize certain aspects that worked and felt very natural to VR, for example looking around, gazing and and exploring the environments with one’s sight,” Guerreiro said. “And from that point it became pretty clear that moving between certain points or beacons within the environment would be a good way to structure and move around in the game.” This design means that the game needs to somehow direct the player’s gaze to each beacon or area of interest, otherwise they’ll get lost. But Visiontrick also wants MARE to be understated—”for the game design and art to be one and the same,” as Guerreiro put it to me.


It would be too easy to have glaring contrasts in colors and light to attract the player’s attention, or to have waypoints to more directly guide them. Visiontrick wants to generate surprise and give the player a sense that they have some agency in their exploration rather than following obvious signposting. And so the key to solving all of these issues is building a subtle language into the game’s environments. This is what this new teaser trailer is all about: Guerreiro wants you to see the “contrasts between the stillness of the ruins and, for example, the movement of a lonely tree that sways with the wind or the childlike playfulness of the girl.”

Fortunately, Visiontrick has had a lot of practice when it comes to creating geography that is in conversation with the player due to the other game it’s making at the same time. The first episode of Pavilion was released earlier this year; a game that tasks the player with manipulating bells, torches, and other embellishments in the walls of its surreal labyrinth in order to guide a man through it. It seems likely that many of the lessons Visiontrick may have learned while making Pavilion could be transferred to MARE.

Given that Visiontrick is developing both of these games (MARE and the other episodes of Pavilion) it’s understandable that they don’t have a release date for either yet. Guerreiro did tell me that MARE is about 50 percent complete so far, though, and also confirmed that, for now, they’re only working on it for Oculus platforms. “At the moment it can only be played with one’s gaze and there’s no concrete plans for a non-gaze version,” he added.