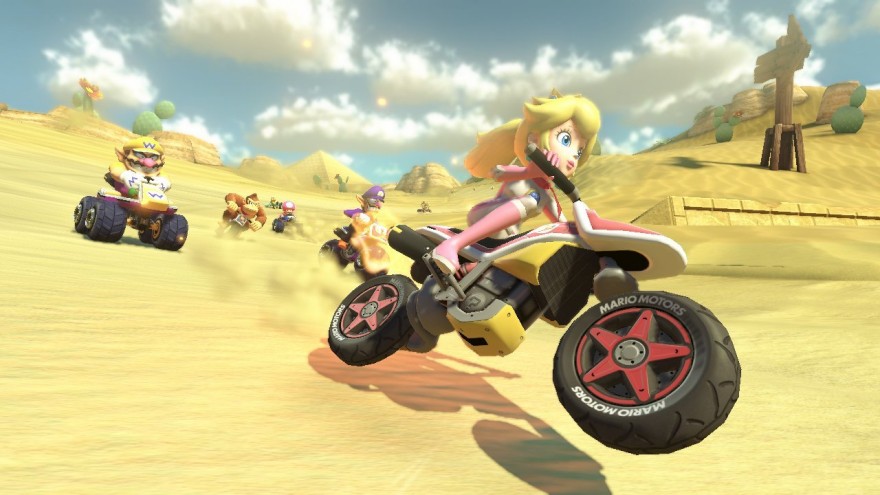 SLO-MO: I’m holding a Wii Wheel. It’s plastic and white and smooth. The race has not yet started. My wife holds the Wii U GamePad. On its screen is a large egg with spots. This is Yoshi’s horn. If you touch the egg, Yoshi beeps his kart’s horn. Surrounding racers jump out of their seats. Startled. Our television set is bifurcated with a vertical line. Her Yoshi is on the left. My Wario is on the right. A cloud-riding turtle hangs in the air. His traffic signal burns red. I lean to my left. I reach my hand off the plastic wheel and move towards Yoshi’s egg-horn. My wife looks right. Her eyes widen. Her nostrils flare. She pulls the GamePad away from my encroaching hand. She says, “Dooon’t tooouch mmyyyy hoooorrrrrn.” The signal burns green. I press a small plastic button. Wario accelerates past Yoshi. The race has begun.

PLAY: Mario Kart is an accidental behemoth. What was supposed to be a one-off experiment in 1993’s Super Mario Kart on SNES became, with each subsequent release, a beloved and expected part of the Nintendo Player experience. Each system gets its Mario Kart. And each is similar enough to maintain the distinct joy available only here, but different enough to warrant another go. Of course, that last point is debatable. So the question here is: Does Mario Kart 8, the latest release for Nintendo’s stuttering home console the Wii U, warrant another go?

SLO-MO: The best part. The part I’ve spent more time on than racing. The replays. Each race has a highlight reel. Automatically generated. Dynamic camera angles. You choose: 30 seconds, 45 seconds, 60 seconds. Action? Big Hits? Drifting? Everything? Then it plays. But you control time. A green shell smacks Bowser’s crotch rocket. You want to see that again. Tilt the joystick right and the moment rewinds. Hold the B button and the scene slows down. Princess tosses a shell. The shell is sliding. Bowser is steering. Unaware. The camera zooms in. The shell makes impact. Bowser’s lizard face squints in agony. Sparks fly. Stars explode. Fragments of shell shower down. The bike flips forward. Here comes Princess. The camera pans. Focuses on her porcelain face. Her head moves to view her target. She passes by Bowser’s wreckage. She faces forward. Blinks once. Her monster truck tires rotate. Separate wheel axles spin. Release the B button and she hits a ramp, flying.

REWIND: Replays have featured in nearly every game in the series since Mario Kart 64. I played the 1997 release for reference and felt as if I was back in high school, my buddy Ryan plotting out tournament brackets with magic marker. But what I’d forgotten were the post-race replays. After each finish, the screen splits into quadrants; as the results and scores tabulate, two squares show different camera angles of your kart racing around the track. One shows your character from the front, its mid-90s sprite a blurred pixel mess. The other shows the track from a first-person kart perspective but at super high-speed. Not just at a fast driving speed, though: The action has been sped up, the course shown in Fast-Forward.

The feature evolved when the game went online with Mario Kart DS, and continued with Mario Kart Wii and Mario Kart 7, the 2011 release on 3DS. Each offered waiting players a dynamic view of the race as it unfolded before you entered the fray. Nintendo has honed their dutch angles over the years; there’s a surprising sense of drama to a cartoon racer when viewed at the right perspective, and that is heightened to near-Operatic levels when combined with the ability to slow down and manipulate the scene in real-time.

FAST-FORWARD: Nintendo has high hopes for Mario Kart 8, hoping it sells many millions of Wii U systems, especially since Mario Kart Wii sold over thirty-five million copies, which is larger than all three next-gen console user bases combined, but it must be said that this game could easily be played on either Microsoft or Sony’s new system, because the single largest differentiating feature between the three platform holders, besides raw horsepower and system architecture, is the Wii U GamePad with its self-contained screen, and here it is barely used at all, an absence of ambition that Nintendo hopes you fail to recognize as you yell and howl at the television or your friends, zooming across a space station high above the earth in this game’s version of Rainbow Road, the big finale, and everything is super-crisp, Crisco-smooth, but the lack of any compelling use of the GamePad beyond a map or a horn is bonkers and disappointing and an opportunity missed to show how this version is far and away better than the last console Kart released six years ago.

PLAY: Let’s not vacillate here. Mario Kart 8 is far and away better than Mario Kart Wii. I played the previous game just before running the new one for the first time. I raced on a track called “Moo Moo Meadows,” a pleasant curvy dirt road through farm land, with an occasional cow getting in the way. I was reminded of how fun it was to manually steer this plastic wheel and see my kart turn on the screen. Everything looked and played just fine.

Then I start up Kart 8. One of the first retro courses available is that same “Moo Moo Meadows,” but now revamped in high-definition and scored with live instruments. What was before an electronic approximation of a fiddle is now a real fiddler’s bow pulled against real catgut. But more impressive is the sheer visual clarity of what was a familiar place. This dirt has soaked up rain in spots. That farmhouse has planks of bent wood. Light glints off of ShyGuy’s chrome exhaust pipes. On May 20th, Nintendo will shut off the networking service powering Mario Kart Wii and all other Wii and DS games’ online play. Ten days later, nobody with a Wii U and a copy of this game will care.

REWIND: Let’s back up for a moment. There is another new feature besides HD graphics and VCR replay functions, and with it a compelling use of the GamePad. A unique track style puts your vehicle in Anti-Grav mode; your wheels flip horizontally and you hover across the road, now bending skyward. You may be driving upside down or on a ramp rotated forty-five degrees. While driving, the camera angle remains behind you and right-side up. But during a replay you can see yourself upside-down, or gape at the entire landscape below you, slightly off-focus and far away.

A recommendation: During upside-down replays, watch the GamePad and rotate it vertically. The resulting image is an askew vision of what you’ve seen a thousand times before: Mario or Luigi or Toad driving a go-kart, but this time the screen is higher than it is wide and the landscape behind them is flashing by at some odd orientation. When I watch my racer gliding along a corkscrewed stretch of road, I find myself turning the Pad in my hands like a wheel, keeping my character centered while the world around me swivels and tilts.

PLAY:  After two weeks of playing (and watching) Mario Kart 8, I want to slo-mo everything now. I imagine running for the bus, arms pumping, feet impacting the pavement with cloud-bursts of dust below each footfall. I’m walking through a grocery store’s automatic sliding door, my plastic bags swaying with the weight of canned baked beans and Hass avocados, each undulation reflecting the overhead fluorescent lights in freeze-frame shimmers, like a paparazzi’s bursting flash-bulb in flipbook form.

I play other games and am surprised and disappointed when I can’t decelerate time and see each detail float by at one-tenth its original pace.

SLO-MO: Mario Kart 8 has ruined me. We miss so much. All the time. Every moment is a collection. Of smaller moments. Unobserved. How sad and limiting! When we only get to see things. Once and at normal speed.