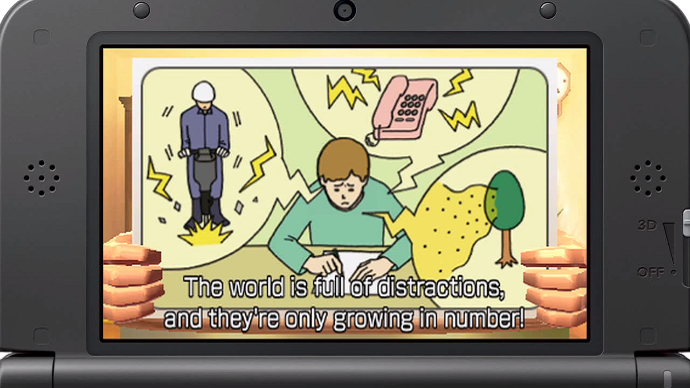 The original Brain Age: Train Your Brain in Minutes a Day! was a surprise hit for the Nintendo DS, which along with its sequel sold over 30 million copies and went a long way to convince those who never owned a gaming system before to pick one up and exercise their aging cortex. It also had a rock-solid set of Sudoku puzzles built in. This was in 2005, a full three years before the launch of Apple’s App Store. Digital puzzles and daily mind teasers were a novel concept unavailable elsewhere.

This past Sunday, Nintendo released Brain Age: Concentration Training for their 3DS handheld, and you get the feeling they know the ground beneath them has shifted. The ad campaign and the game’s theme itself highlight the struggles traditional game-makers are facing in a landscape near-unrecognizable from just a few years ago.

I received an email a few days ago. The subject: “Jonathan, do you find yourself constantly checking email?” The rhetorical question with an unfortunately obvious answer leads into an ad for the new Brain Age game. Instead of the original’s attempt to keep your mind sharp and strong (through a series of fun, if scientifically dubious exercises), this one taps into the zeitgeist of…. huh, what? I checked Twitter and forgot what I was saying.

The new tag line, ‘Devilishly Tricky Training for the Modern Mind,’ emphasizes the game’s attempt at combatting our contemporary times. Instead of brain apathy, we’re called to focus our attention. A tutorial even mentions the multitude of devices clamoring for our time. (As we hold one such device!)

Our host is the floating polygonal head of Dr. Ryuta Kawashima, a Japanese neurologist whose research helps develop (and sell) the series. Playing just five minutes a day can help hone our working memory, he/it says, thereby increasing our ability to focus. In Europe the game’s subtitle is quite blunt: “Can You Stay Focused?” A new mode of increasingly difficult challenges is hosted by a post-devil transformation Dr. Kawashima, complete with red-toned skin and horns. We’ll save analysis of this for a later date.

Even if you haven’t been paying attention, you’re aware just how different the handheld gaming landscape is now than it was in 2005. You can play a thousand Sudoku games on a hundred devices. The App Store has dozens of brain teasers available for free. The demand for the Brain Age experience can only have dwindled. And Nintendo knows this.

The ad email continues: “What makes Brain Age: Concentration Training special?” it asks. Such an obvious question should not be needed to sell a game.  The message pre-empts our hesitation: We know you’re thinking, ‘Why is this any different?’ Well let me tell you.

The new Brain Age taps into the zeitgeist of…. huh, what?

Another obvious question: Why buy this game for $29.99 when I could have any number of similar games for free? Nintendo knows the hill to climb to regain the expanded audience they arguably helped build is steep, and only growing steeper. I play to put my five minutes a day in and see what happens–although one reviewer already tapped out. Seems like he couldn’t handle the pressure.

A quick search on the App Store reveals stiff competition—Fit Brains Trainer looks tailor made to scoop up those buyers of the original DS game who haven’t upgraded to a 3DS but instead own a smartphone. Its iTunes description borders on plagiarism: “…the easiest and most enjoyable way of keeping your brain sharp in just minutes a day.” It’s even based on a doctor’s research, Dr. Paul Nussbaum, “one of the top clinincal neuropychologists in the U.S.” (sic).

The very conceit of Nintendo’s new Brain Age game—Pay attention! Stay focused!—is an acknowledgment of a traditionally underserved audience being catered to by a wider spectrum of companies than ever before. Bad for business for some, no doubt; in general, though, the range of options and availability will force competitors to innovate or risk being ignored. This can only be a good thing for players. As long as they can pay attention long enough to enjoy it.