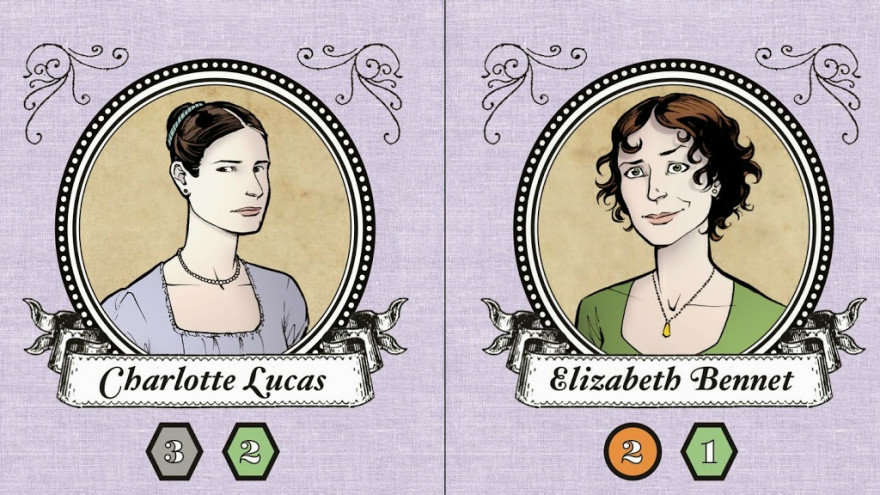 My own memories of high school math classes are fuzzy, but apparently everyone I work with spent that time playing Hearts. Hours of cards tossed casually with laughs and laments, and somehow I missed it. At least until my colleagues grew tired of the games I’ve been forcing them to play at lunch and demanded I join their club. It took a few hands, but I’ve come around to the appeal, which has little to do with the game. It’s something to fill pauses, while away spare minutes, and fabricate some heightened emotions at the hands of a cruel card deity who has never held much affection for me.

It’s merely a coincidence that I picked up Hearts at the same time as Marrying Mr. Darcy, a recent entry in the resurgence of quirky physical games. It is part card game and part role-playing-game, but fully-consumed with breaking hearts, enduring scandal, and craftily kneecapping your competition, much like the source material. Or so I assume, that is: One needn’t be familiar with Pride and Prejudice to enjoy this game, and shamefully I am not. But I jumped on Marrying Mr. Darcy as an opportunity to get my girlfriend interested in a game. Luckily, despite my lack of familiarity, the second most important trait required for complete enjoyment of this game (as in Hearts) is the willingness to get a bit theatrical.

Because what is high society without drama—whispers against your rivals, or strategizing towards a collection of character traits curated with a spouse in mind? Though the aim of Marrying Mr. Darcy is to hold the most points at the end, which includes but doesn’t rely entirely on hitching up the best husband, really it’s about outmaneuvering your competition. This takes a few plays to really get into, because it takes time for friends to shed their civility, succumbing to the base desire for victory. Eventually, as in life, there comes a time when one must choose between hoarding cunning points and thus ensuring first choice when proposal time comes around, or playing those points against another heroine so that she loses her edge in beauty, wit, reputation, and friendliness. Before the scandals, elopements, and piano recitals, one might be inclined to just hold on to those cunning points because we dare not tarnish a friendship.

You may not want to make things personal, but honey, they already are.

However, a pecking order will soon establish itself, and you’ll realize that Mr. Darcy has eyes for that frightful Caroline. You may not want to make things personal, but honey, they already are. To keep from ending up as an old maid a woman must leverage everything she has, because the cards are cruel and random, and you could just keep drawing the same damn event that keeps you from playing your treasure trove of wit points. And because you were burdened with a horrid elopement to Mr. Wickham early on, you simply need to improve your reputation.

This is the foundational charm of Marrying Mr. Darcy. It’s not a terribly complex game, though neither it is simple. Let’s be honest though, it’s a game about marriage steeped in the values of the Regency era, which wasn’t exactly transgressive. The players all assume the roles of women vying for marriage proposals from well-to-do gentlemen, a stage dressing ripped straight from Austen. It’s hard to fault the game for the attitudes of its inspiration.

However, the rules are pretty malleable, with alternates included in the game. You can add in the undead, make it a bare-knuckle fight for Mr. Darcy alone, or gain bonuses for straight-up rejecting extra suitors. The central premise itself reverses the traditional power dynamic and puts control in the hands of the female characters, relegating the suitors to trophies.

Ultimately the gendered language is light and reflects mostly the time and place of Pride and Prejudice, but Marrying Mr. Darcy is flexible enough that all heteronormativity could be stripped away, leaving the core experience: a frightful navigation of romantic courtship with frenemies and chance as the biggest threats. One could play by the numbers, make smart moves without passion, and probably come away a winner. Everyone can be kind and not remove character points from one another, simply playing through the events in tandem, but that’s no fun.
Better to get a little dirty, pit the other girls against each other, and slither up to your suitor with a few choice cards in your favor. A healthy mix of expandable mechanics, elegant language and art, and the right group of Austen newbies and experts ready to heighten the mood all conspire to fill Marrying Mr. Darcy with charm. Like Hearts, and life I suppose, sometimes you’re just dealt a crummy hand. What distinguishes a lady is how she plays it.