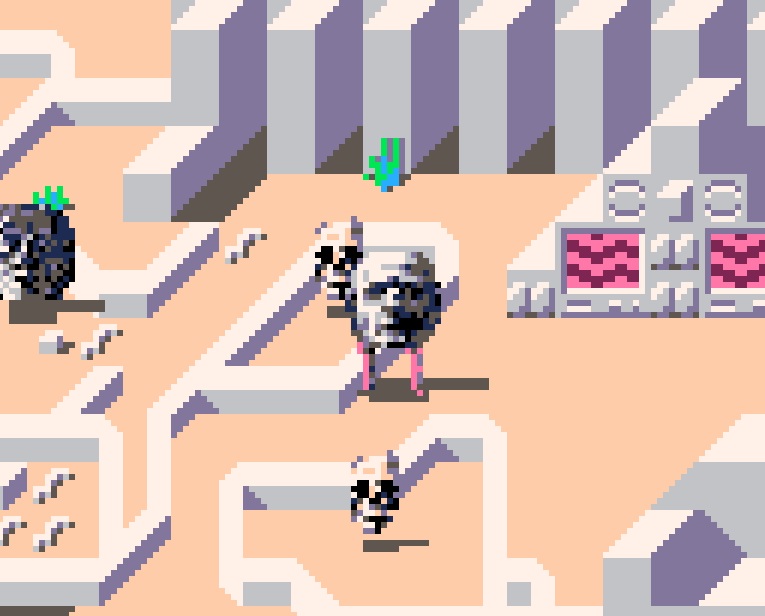 Mason Lindroth’s videogames have always appealed at first look. You may extend that to ‘first feel’ too, given that they’re usually made of squirming clay and chopped-up degenerated photos; time and again, uniquely and gloriously tactile. But let’s stick with that initial love at first sight idea. In my experience, as soon as you see an image of Lindroth’s latest virtual world, a desire to simply move around in it becomes deeply embedded.

This is why the disclosure that Lindroth gives ahead of his “small graphics exercise,” that it is not a game as such, but a “de-facto walking simulator,” doesn’t lessen the excitement (as intended) but ups it. Sure, the turn-based battles in this year’s Hylics were definitely entertaining, with drinks cartons spinning and imploding, and flesh being traded blow-for-blow. But the world exploration was the best time I had with that game (and with Lindroth’s previous ones, too). And you’re saying that this graphics exercise is all and only that? Hot damn.

Lindroth has created a lovingly compact isometric world out of pixels for us here. Understandably, it’s much smaller than the larger surreal lands he usually spoils us with. But inside are plenty of Delphic symbols and dancing skulls, sphinx-mounted televisions and swirling crimson pools, pyramids and antennae. It’s as if someone animated Salvador Dali’s surreal deserts, those that are barren except punctuated with melting clocks and carnivalesque creatures.  You are a head on legs; a stone-faced expression worthy of ancient Greek masonry, mobile, sentient, and curious.

shows you rituals and strange architecture in the distance

The question of “why?” probably won’t even enter your mind given the bandwidth of sights to grok. The topography has the complexity of a hole-punched maze with a number of unavoidable dead ends. Get stuck for long enough and it’ll turn to a pleasing shade of night. It’s the type of place that shows you rituals and strange architecture in the distance but doesn’t let you immediately explore them, teasing you forward. You eventually will be able to investigate those other places, but to do that you first need to experience what this whole project seems to have been made for: the psychedelic warping effect.

Plunge your trotting head into a television screen and its multiple colors will spill out and expand to your entire view of the world in rupturing vertical bands. It’s as if you fell into the bizarre TV portals of Videodrome and then got sucked into 2001: A Space Odyssey‘s Star Gate sequence. In a couple of seconds, you see the bright colors of pink and yellow writhe across the landscape before going out like a candle through burnt oranges and then turning black and white. You’ll see this a few times before your journey ends and restarts, each time confused as to what happened and where you ended up. And by the end of it, if you’re anything like me, you’ll find a single cycle isn’t enough.

You can play Mason Lindroth’s graphics exercise in your browser.