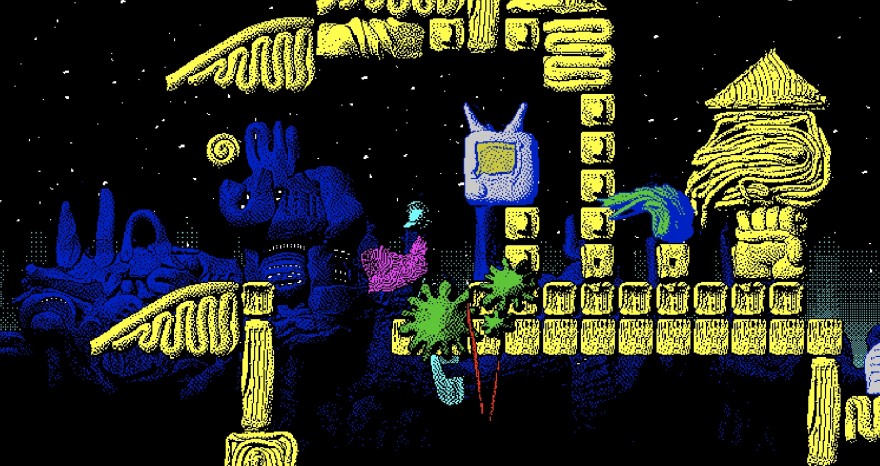 The most convincing argument for playing a Mason Lindroth game is increasingly becoming “because it’s a Mason Lindroth game.” Although you cannot predict what his next videogame will involve you can, at least, guess that it will be made of clay. Everything from hanging overgrowth coiled up into thin patty lines to grouchy finger-pressed waves have been molded by his hands.

Lindroth has found a malleable muse in clay.

Combined with his signature dotty shading, Lindroth makes the best of the squidgy irregularity of the substance, grafting environments that feel decayed and worn in; appearing to have an alien history of their own. It’s at odds with the polygonal orderliness of most other game environments: made by computers to form as firm straight lines all in tandem with each other. Here, in Lindroth land, everything can’t help but have bumps, scars, and straggly limbs. And so it is that, as Tarkovsky has his long take, and Tim Rice has his idioms, Lindroth has found a malleable muse in clay.

His latest playable creation feels like a tribute to his favorite material: how it can stretched, wound, squeezed, and pulled apart. It’s also the most videogame of his videogames. You have three levels to beat. In each of them you must travel to a distant, unseeable point to collect a spinning medallion. There are enemies that patrol paths, others that shoot red balls of clay at you, and large triangular spikes to avoid. This is Lindroth bringing his style to a traditional platformer and seeing what it would look like.

It’s called Melter which, it so happens, describes a third of your abilities that it gives you. As a cloaked figure without a face, you’re able to jump and glide through the air, but this is not your only means of travel. By aiming your computer mouse you can send a blobby trail of clay out as a curve, sticking to nothing but the air. It’s a temporary bridge that you can use. But you can only shoot a bridge with every other mouse click. For on the other one a small green ball is sent out that melts anything it touches. It also has a clustering effect on its initial impact to spread its acid-like destruction.

The three levels test your deftness at using this unusual set of abilities. You must simultaneously create and destroy. Burn through pillars and platforms to descend into “The Hole,” while in “The Space Fortress” you have to construct an improvised trail across the vacuum. It’s a world of clay in which you are the most powerful being on account of being able to mold its architecture to your needs. But it can easily get out of hand, and should you melt too much then you will find yourself falling almost helplessly towards the blood-red oceans below.

You can play Melter for free in your browser right here.