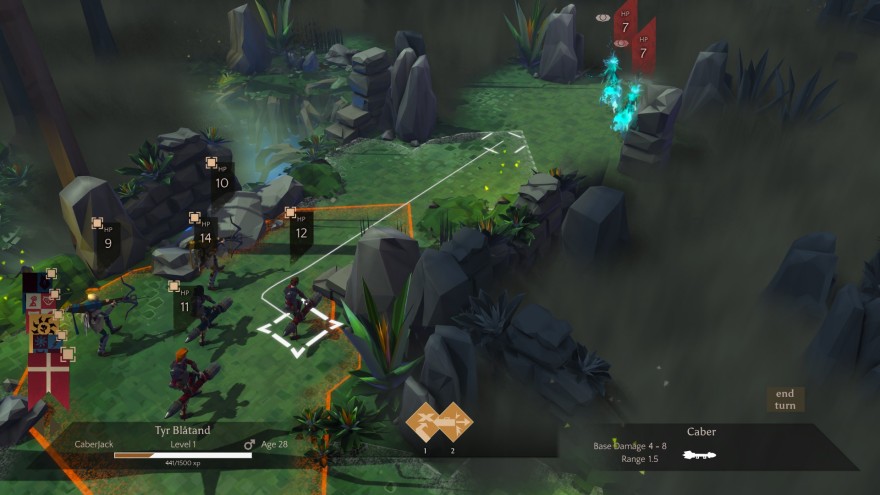 In a lecture given to the Stanford graduating class of 2009, Robert Sapolsky, a primatologist and neuroscientist, explained to the students he was speaking to that they weren’t all that different from apes. Sapolsky studies baboons, which have been documented to show many traits previously judged to be “uniquely human,” such as empathy, a theory of mind, and even the ability to work together towards long-term goals.

One of the few traits that is actually unique to humans, according to Sapolsky, is our ability to work towards a reward so far in the future we might not live to see it. “What we’ve got here is this astonishing human capacity to hold on,” says Sapolsky. “What we have, that is completely unprecedented, is the ability in some ideological and theological systems, to hold on even after you are gone.”

one by one my entire roster of heroes died

And hold on is just what Massive Chalice asks you to do. It is, in some ways, the stated goal of the game. At the beginning, you’re informed of the situation: the kingdom is under siege by mysterious and malevolent forces, named after an ominous-sounding noun (in this case, the Cadence). You, as the immortal ruler-in-the-sky, must defend your land until a charging spell can wipe out your enemy and restore peace to the yada yada. It’s pretty familiar stuff, which made me scoff at the disclaimer I was given the first time I loaded the game, warning me that Massive Chalice contains new and exotic concepts that would be unfamiliar to me.

I won my first few battles. I married some heroic types to some other heroic types, since the game asked me to. And then I hit the fast-forward button and watched, in mute horror, as one by one my entire roster of heroes died. Not in battle— your kingdom is only attacked every dozen years or so, give or take— but of old age.

This is the first of those “new and exotic concepts” to the genre of tactical strategy: the idea that every hero comes with an expiration date. The spell to defeat the Cadence will take 270 years, and it’s up to you to hold on until then. Beating the Cadence fight-to-fight doesn’t matter as much as organizing a long-term defense, and for that you need a steady supply of soldiers to take up the fight. That’s where those marriages come in: “not a union of passion, but of necessity,” go the two narrators, voices from a literal massive chalice. While Double Fine’s particular brand of off-beat humor is present throughout the game, it feels almost apologetic, sheepishly covering a darker story than the developer has tried to tell before.

a chance to create a relic in death

It’s easy to draw comparisons between Massive Chalice and XCOM; both rely on the dynamic of macro-planning versus micro-battles. The games differ on where they place the focus, though. The planning phase in XCOM always seemed very much in service to the tactical battles. It was all about moments of individual heroism and personal loss—your sniper taking an impossible shot and succeeding, your prized medic disintegrated by a stray plasma bolt. I also felt those feelings, early on in Massive Chalice, and one catastrophic defeat in battle saw me lose my entire squad of heroes. But after a while, like a Ricean vampire, I saw too many mortals pass beyond their coil. Dying at the hands of the Cadence, as opposed to father time, just meant they had a chance to create a relic in death.

The planning phase, where you marry heroes, research new weapons and armor and build keeps and guilds is clearly where Massive Chalice has devoted the most attention. Genetic traits and personality traits are different mechanically, with adopted children picking up the latter but not the former. Even elements of the tactical combat remind you of the larger picture—Wrinklers, for example, are enemies that age heroes with every strike. Losing a couple heroes in a fight can be tough, but it’s nowhere near as disastrous as losing a strong bloodline.

Take the Rouliers, the Alchemist family I began the game with. They had a wonderful tendency to pass down the brainy and hearty traits, making them the toughest and smartest family in my kingdom. There were always branches that needed pruning, but I could always pack them off to the Sagewright’s Guild, a monastic order that boosts your research when staffed. My plans for the Rouliers went to hell when the likely heir was killed in battle, leaving only her dimwitted, near-sighted brother to continue the family line. She created a relic as she died, though, a special weapon passed down through the generations. The Roulier bloodline weakened, but they always had that artifact to remind them of their glorious days of old.

Games like Massive Chalice live or die on the emergent narratives they create, which makes designing death as an inevitability for your cast of heroes an admirable risk. They’re trusting that, as the wheel of time turns, players will glimpse a larger shape coming into view. The stories that stand out are family epics, like the Buendias of Gabriel Garcia Marquez’s 100 Years of Solitude. By following the tangled paths of lineage, we’re left with tales too large to be understood in terms of the lone hero.