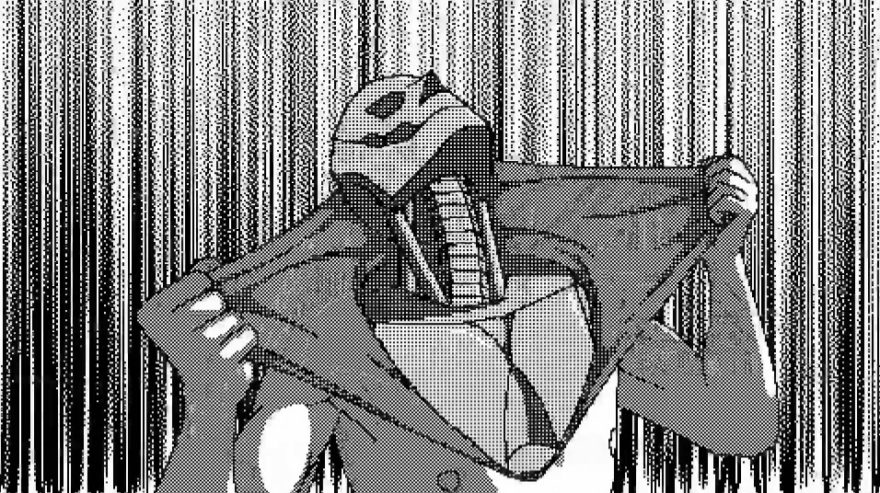 You should probably take a seat before you watch Mattis Dovier‘s Inside. Just get your head straight, y’know, couple of deep breaths, because Dovier’s animated short is a hugely discomfiting, bleak take on the relationship between people and technology. It spreads like a plague: our monotone narrator guides us through a future where, just beneath a pliable film of flesh, lies a gleaming mechanical skeleton.

He dreams of cables sluicing below his skin and bursting from his mouth; a burn on his hand dries and cracks wide to reveal cold metal within. His doctor diagnoses him with “severe hypochondria,” but he knows there’s something else going on. Or he thinks so, at least.

Self-taught, Dovier works in an unmistakable style, one he described to me as “stripped of unnecessary details.” First Dovier draws each frame by hand in low resolution. Then he fills in shadows with pixel grids converted in Photoshop’s bitmap mode. The end result is somewhere between “numeric and classic aesthetics like engravings,” he said, as well as the screentone process characteristic of manga.

it bores into a dreamlike, unreal place

But black-and-white bitmap art also allows Dovier to move fast while still hand-drawing his work. It’s an interesting hack, one that relies on the very union of human and machine that Inside obsesses over. Dovier took Cronenberg’s The Fly (1986) and Videodrome (1983) as inspiration for the short, naturally, but also Charles Burns’s surrealist teenage body-horror comic series Black Hole (1995-2005). Somehow, Dovier hasn’t seen Shinya Tsukamoto’s seminal Tetsuo: The Iron Man (1989), but people have been nagging him to take a look. There’s more than a bit of guro in Dovier’s ecstatic mutilations.

And, similarly: “During my research, I came across a Japanese dance called “Butô” that expresses a really deep inner pain.” The first shots of Inside directly pull from Butô: the narrator comes across a twisted, pained figure “screaming and struggling against thin air like one possessed.” Somewhere between performance art and dance, Butô is an amorphous discipline; philosophically transgressive and physically demanding.

Its earthy, visceral qualities are right in line with Dovier’s depiction of technology. His work isn’t didactic; it bores into a dreamlike, unreal place where we’re shown abstract and strange things. “We are in a society that wants to be more and more functional, like a tool, and tools are nothing except inanimate objects without someone behind them,” Dovier told me. “Does it make any sense if we lose the pleasure?”

The pleasure is there in Dovier’s work, in every bold composition and strobing bitmapped cloud of noise. Sink into this stuff, let it gnaw at the places where you quietly fear the inevitable and constant decay of your flesh and the unmapped, unimagined places we hurtle toward as a species.

Then, I dunno. You’ll probably need a laugh.

You can see more of Dovier’s work over on his website.