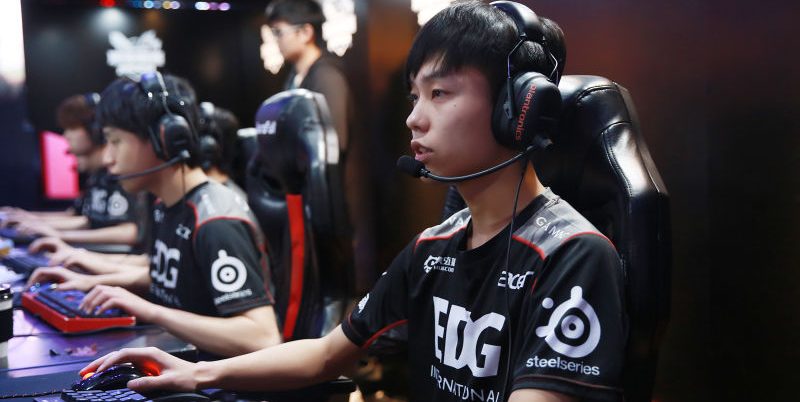 As Ming “Clearlove” Kai evolves from an aggressive risk-taker to an eSports team captain, his trusty gaming PC remains a portal to becoming a consistent leader. Kai’s competitive League of Legends (2009) career has kept the eSports community on their toes. Notorious for his unpredictable boldness, the daredevil now seeks to find stability as Edward Gaming’s (EDG) gifted captain. After being named ESPN’s top jungler at this year’s World Championship, empowered by both the support of his teammates and powerful practice rig, hope runs high that Clearlove will lead EDG to victory.

He’s certainly qualified. At his first League of Legends (LoL) Pro League in 2014, Clearlove snagged the top spot in the MVP ranking after some nail-biting battles. In LoL, two teams of five face off against each other from opposite corners of the map in an attempt to destroy the other’s base. Usually, teams duke it out in either the top, middle or bottom lanes that split up the Summoner’s Rift map. To start, teams gain power by accumulating gold and experience points, giving players who secure early kills and cut their opponents opportunity short an advantage.

Like two boxers trying to land blows without losing too much ground, many LoL teams wait for the perfect moment before committing to a fight. But as a team with excellent execution, EDG often tries to force fights early. When opponents evaded the tactic in the 2014 playoff semifinals, Clearlove stumbled. But after opponent Xu “17″ Zhao made one misstep, drifting just a little too far out of his team’s defenses — and Clearlove revealed his true colors.

As a jungler, Clearlove plays the wild card position, roaming the map searching for fights. When 17 pushed his luck, Clearlove pounced, securing an early kill that helped snowball his team into victory. But the 2014 World Championship was a different story.

Shooting to a top position in the tournament at first, EDG went on to lose 3-2 to team Star Horn Royal Club (SHRG). In a close game five, EDG’s early lead dwindled after several messy slugfests went south. Poor organization on EDG’s part helped SHRG edge its way back into the match, culminating in a late game march up the bottom lane. When the wave finally broke against EDG’s base, Clearlove was the first to fall. “The end is also the beginning,” Clearlove declared at the time, dejected but optimistic for the future.

The end is also the beginning

These erratic performances — wavering between ruthlessness and uncertainty — have haunted Clearlove for most of his eSports career. While he’s adept at turning moments of crisis into opportunities, finding some level of balance in the chaotic play is crucial for his team going into Worlds this year. But one constant has driven Clearlove ever since he first began playing LoL in 2011: his love of competition.

“What hooked me the most about LoL was the tournament aspect,” he said. The thrill of matching wits, skill and experience against opponents fuels Clearlove’s play style, which focuses heavily on team fights. Nicknames like “Promise” and “Director Nuo” sprung from early commentators who said he resembled a director controlling enemies like they were actors. But now, Clearlove seeks to direct his team in a much more collaborative way. “The foremost thing is trusting each member,” said Clearlove. “We have to listen to the opinion of others in order to make a precise evaluation.”

Moving from daring rogue to wise team leader, Clearlove’s emphasis on trust and communication can be seen in recent matches. Wiping out an entire enemy team is no easy task, but that’s what Clearlove did at a 2 vs. 5 pentakill executed against GT, during the Demacia Cup. With teammate Mouse running for dear life after baiting his opponents, Clearlove swooped in to reverse the fight. While an ability boost helped, it was the tight coordination with Mouse, not to mention the latter’s willingness to self-sacrifice for the group, that made the play a success.

Clearlove said that good communication, including real-time strategic advice, was key to the swift annihilation. Without faith in one another’s judgment, their well-timed attack could have quickly turned into an unforced error and a boon for the enemy team. This shift toward open communication even led EDG’s coach, Ji “Aaron” Xing, to rave to The Score that, while “every pro player has to be gifted, from my perspective, Clearlove is very gifted.”

Previously, the two played together on Team WE. Their shared history and dedication to perfection, along with a mutual respect for one another, make Xing and Clearlove ideal collaborators. “We learn from each other, and we grow with each other,” said Clearlove. But navigating setbacks remains a top concern. Despite EDG dominating its 2015 Summer Season, the team faltered in the playoffs, only securing a place at Worlds 2015 through the Regional Finals.

Through these ups and downs, Clearlove has remained steadfast on improving. Clearlove views his “failures” as opportunities to reflect then double down on training. “I can say I have won many championships in my career, but I feel I haven’t reached the peak of my career yet at heart.” During the grueling hours of practice, he turns to a reliable companion: his gaming rig.

Clearlove remembers his first underpowered gaming PC, which he bought with savings when he was just a high school junior. Today, he sports an Acer Predator series with the latest Intel Core i7 processor and NVIDIA GeForce GTX 980. “It’s robust enough for me to run LoL on the highest performance setting, but also lets me stream smooth gameplay without any lag,” he said.

Clearlove is growing into his role as “the shotcaller”

Having a dependable rig is of utmost importance to Clearlove in the tense weeks leading up to Worlds. It helps him keep his mind focused on the game not the technology. “At this moment, emotional self-regulation is extremely important to me as an eSports athlete.”

Clearlove believes the key to remaining on top is learning to grow, adapt and evolve both with the technology and ever-changing tides of the eSports scene. After winning a thoroughly dominant 3-0 series against Chinese rivals Royal Never Give Up in the 2016 LPL finals, the EDG stalwart reached a new level of maturity. Whether EDG has what it takes to compete on the biggest LoL stage, however, is still open to debate. As Clearlove grows into his role as the shotcaller, modifying strategy to boost each player’s individual strengths, he’s focused on making fewer missteps. “I am hopeful EDG’s performance will only get better from here.”