When you swipe right on Tinder and get a match, the game gives you a nice win screen. “It’s a match!” is scrawled across the top in big letters, with a picture of you and your potential mate (in all his or her intrigue worthy of a right swipe) framed beautifully next to one another. “You and [insert name here] have liked each other,” Tinder tells you, stroking your ego, reaffirming that you are sexy and worthwhile and can totally get Tinder matched whenever you want. Finally, at the bottom of the screen are two buttons: “Send a Message” or “Keep Playing.” Which roughly translate to: “Actually Communicate With This Human Person” or “Ignore This Human Person And Feel Validated By Another One Instead.” Almost everyone I know opts to keep playing this stupid game.

The more time I spend on Tinder directly correlates with my declining opinion of the human race. Mostly, that declining opinion comes from the way I use the dating app myself, and is not meant as a slam against the hapless, innocent people who are on the receiving end of my swipes. Tinder people mean nothing to me. I realized the app would be useless as a romantic endeavor about fifteen minutes after downloading it. Yet years later, I find myself still resurfacing on occasion to satisfy a different kind of itch. I’ll swipe right, and start conversations with men like a normal person does on such dating apps. Then, I proceed to gift said man with one beautiful moment of deep confusion and unexpectedness, breaking the onslaught of meaningless Tinder interactions, before disappearing from his life forever.

everyone’s playing their own game

“I think I saw you standing in line at the supermarket,” I say to a sandy-haired blonde who will remain nameless (to protect his identity, of course.) “Ha what where” he responds, without a second to spare for punctuation. I never answer. I move on to the next victim. “Rick?? Wtf are you doing on Tinder you lying sack of shit.” This one takes fifteen minutes to respond but when he does he’s a force to be reckoned with and a little too defensive. “Whoa that’s not me but he sounds like a douche.”

You might think me cruel for my unusual, twisted Tinder games. But I have a few golden rules I never break. I can never take up more than 30 seconds of my faux Tinder match’s time, and I never ever engage past two lines of dialogue. My goal here is not to tease or torture or invite false hope. My goal is to add a moment of flavor to an unending barrage of superficiality; to force the other person to pause in their ceaseless swiping and see the person at the other end of the screen as a human with problems and/or groceries to buy. I feel no moral qualms about my Tinder practical jokes because everyone’s playing their own game on this app. I just happen to be a bit more creative while inventing my rules. 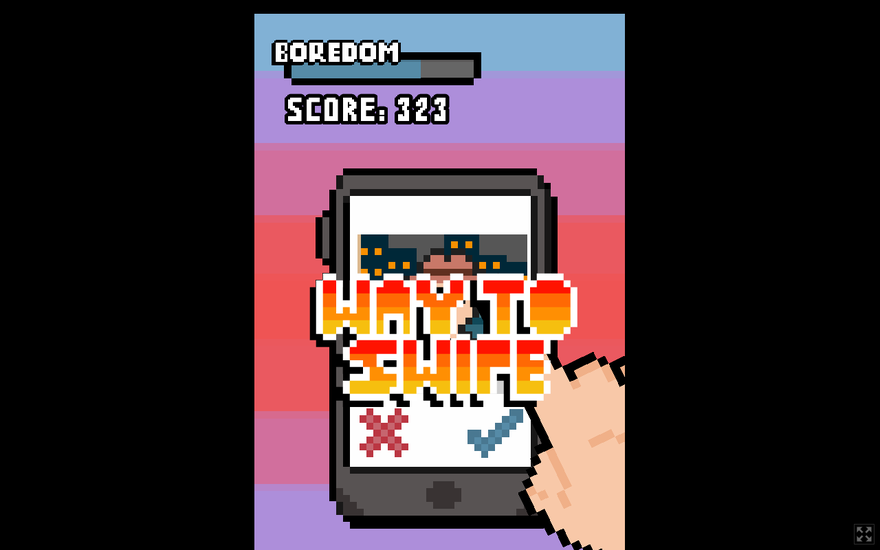 Millennial Swipe Sim 2015 by Buzzfeed creative director and game designer Will Herring captures the sea of nothingness that is Tinder’s unhacked gaemplay. The goal is to swipe as many times as possible (regardless of direction) and stave off boredom. The hollow, empty faces in each profile literally fuel your entertainment, as the game rewards you for callous indifference. The more time that passes, the less distinguishable the pixelated face become, quickly transforming from human into a nondescript horde of horny zombies. In a weird, twisted way, you begin to see this world as almost an execution of true communism, where everyone can rest assured that their exactly as useless and inconsequential as the last person you swiped left or right to get rid of.

the game rewards you for callous indifference

There’s combos, too, which are just as meaningless as the pixelated people. Despite the fact that you know it means nothing, it still feels so inexplicably good to start seeing x3, x4, x5 flash across the screen in response to your frantic motions. Like the feedback loop from real Tinder, you begin to chase the validation more than anything else. You want that red notification bubble to keep stacking up, so you can pretend other people think you’re kinda maybe a little worthwhile (at the very least, worth a right swipe from their index finger.)

Though Tinder doesn’t have a game over or kill screen, Millennial Swipe Sim 2015 imagines the perfect one. If you fail to swipe enough times or accumulate enough meaningless validation, death comes for you. Swiping through the profiles, you become frantic in your attempts to stave off the inevitability of your expiration. But it comes for you anyway. No matter how many swipes you get in, you’ll end up an old and wrinkled millennial buried underground and whatever new, more superficial dating app that will exist in the future.

You can play Millennial Swipe Sim 2015 for free on your browser and phone. 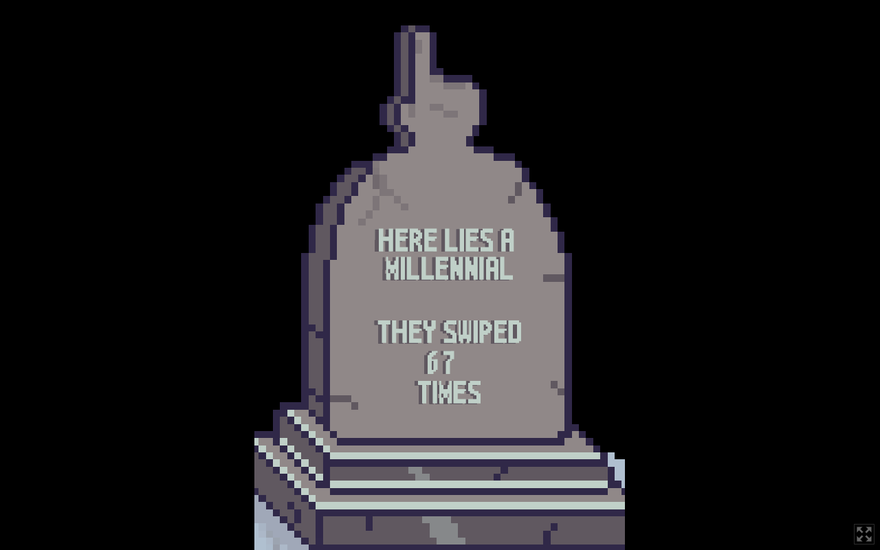