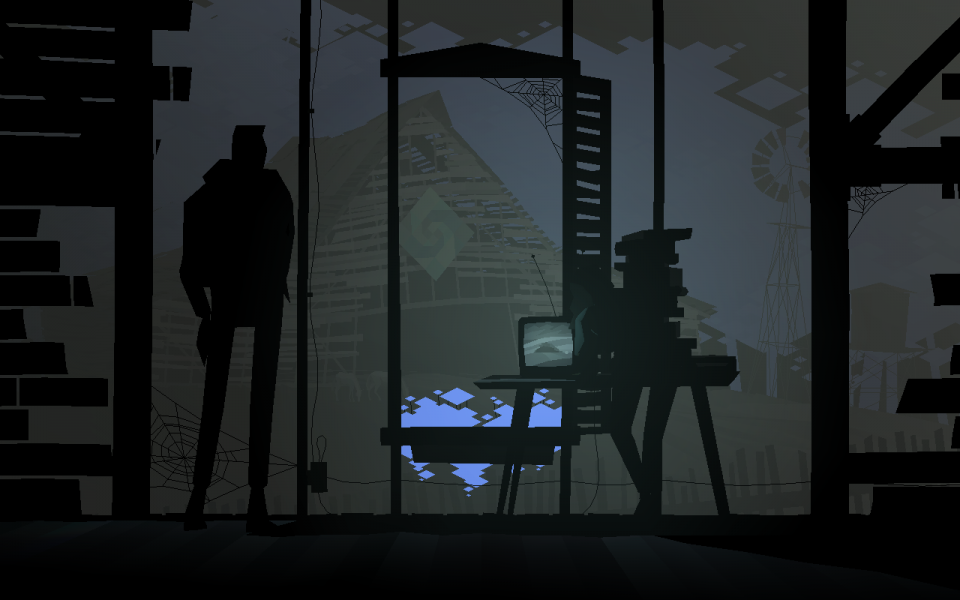 The first moment that Kentucky Route Zero (2013) throws a surreal curveball at you feels like a wake-up call. A character you’ve just met has finished fixing a TV, which doesn’t focus the picture on the screen as you expect, but somehow switches the barn outside the nearby window for a cave entrance. The transition is hard to grasp—a sleight of hand trick that holds up under scrutiny. As the camera zooms in, the edges of the entrance smudge against the landscape, unconnected to anything, like a hole has been painted into the scenery. A truck pulls in front of the cave—the characters driving it being your only remaining anchor to reality—and goes straight in, disappearing from view. And that’s it. It’s over. The moment remains unexplained, sending a clear message that this is not a game where you search for your answers and find them. The game demands that you meditate on them.

Headspace is a guided meditation app designed by a former Buddhist monk. I tried it out over a year ago and was surprised to find that it drew me in immediately. You learn early on in your journey with it that meditation is not about unlocking a zen state of oneness with the universe, or about clearing the mind. Conversely, it’s about mindfulness. You sit down and take slow, deep breaths before closing your eyes, then you notice the sounds around you and the weight of your body on the chair. The idea here is to be present in the moment, meaning you’re not actually thinking about any of these things, but taking the time to notice them, to feel them as you’re prompted to “settle into the space around you.” The same idea carries over to noticing the presence of the mind.

With guided meditation, you’re next given prompts to “scan the body” and “focus on the breath.” These prompts are designed to steer you away from analysis, because while you’re observing the physical body, it’s easier to do the same with your thoughts. The misconception is that meditation is a way to clear those thoughts, but it explicitly encourages you to let them come and go, instead of being distractions. One metaphor Headspace uses likens ideas stirring around your mind to cars driving down the road. Meditation is simply watching the traffic. You’re not chasing after the cars—or letting your thoughts carry you away—but noticing them as they go by.

The car metaphor is particularly appropriate here, as Kentucky Route Zero tells the story of a truck driver named Conway who’s trying to deliver a package to an unusual address on an unmapped road. The world gets stranger as you accompany Conway along the enigmatic Route Zero, like if Samuel Beckett wrote Heart of Darkness (1899). At first, it’s a bleak world of abandoned homes and financial struggle. Soon enough there’s an office building full of white-collar types bureaucratically repurposing buildings, including one floor full of bears (helpfully labeled in the elevator as “bears”). Later on, Conway encounters one of those repurposed spaces: a church converted into a bourbon distillery, staffed by ghostly skeletons making barrels shaped like coffins. At first pass, there appears to be little in the way of rhyme and reason in Kentucky Route Zero, its events bobbing and weaving in unexpected and unquestioned directions. You might ask yourself how you’re supposed to make any sense of it while you play. In response to this, some describe the game as “meditative.” What that term necessarily means may lead to confusion. But my short time meditating has informed my understanding of its connection to Kentucky Route Zero.

Meditation is time you spend ostensibly doing nothing. Headspace is very clear that you are not to be eating or listening to music or anything when you meditate. But this nothingness is used to find presence in the moment, leading to calmness in your thoughts and feelings. Kentucky Route Zero employs a similar emptiness and slowness to make sense of its characters’ abstract, melancholic world. It is principally an atmospheric experience that asks you to interact with, talk to, and notice the world around you. While I was learning the techniques of meditation and finding out what “settle into the space around you” actually felt like, I noticed parallels with how Kentucky Route Zero draws you into its own spaces, making its oddities enticing rather than alienating. Your purposeful, slow exploration of an expansive off-site storage facility-cum-church helps you process the full extent of how strange such a location is. Shortly after, you talk with a young boy whose brother is apparently a giant eagle that moves buildings in and out of a museum for a living, yet it is the delicate conversation you have with him about his missing parents that offers emotional grounding in that odd moment. Meditation is designed to help shed light on your thoughts without getting lost in them, and what Kentucky Route Zero does is adapt these same methods to take a player through someone else’s thoughts. Meditation appealed to me as a way to confront my problems with anxiety. It makes sense that a game that co-opts its techniques can then more intimately confront the anxieties of others.

notice the fleeting impermanence of moments

Since there’s no feedback or measure of your progress, newcomers to meditation often worry that they’re not “doing it right.” It’s easy to feel the same doubt when playing Kentucky Route Zero. The game plays out through a series of dialogue choices, but these don’t allow you to influence the plot. The purpose of these choices instead is for you to find awareness in someone else’s moment, like achieving mindfulness by proxy. Despite the absence of any possible failure with the choices you make—the story continues regardless of what you choose—it’s still not easy to pick the best dialogue options. Sometimes your task may be as simple as commenting on the sunset instead of asking for directions. Or it could be asking for help finding a package’s destination or asking for someone to tell you about their life instead. At one point, while playing as Conway after having an accident, you have the choice between stating that you think you broke your leg or that you feel fine. There are many moments like this where it’s easy to freeze and fret about what your choices could mean. But what’s more important is that in a game and story filled with elusiveness—in terms of both narrative and agency—the point isn’t to dwell on choosing the right decisions, but to notice the moments presenting them and feel out the decision that seems right to you. Meditation asks you to let your thoughts come and go, encouraging you to notice the fleeting impermanence of moments, and through its pseudo-chaos theory of unmade choices, Kentucky Route Zero envelops you in them. Awareness of the moment becomes how we understand it, even if the big picture remains a mystery. Both Kentucky Route Zero and meditation want us to value finding meaning in that mystery.

In one scene, you drive Conway’s truck and pass a guitarist on the side of the road. You’re given the choice to put a dollar in his cup. If you do, he pulls it out and hands it back to you, now wet with whiskey. The impulse might be to analyze your reaction to this; to decide if it was okay to laugh, to weigh your guilt, to search for hidden meaning in the scene. Or, to go back to a previous metaphor, to chase the cars. But this isn’t how you derive meaning from meditation and it isn’t how Kentucky Route Zero reveals meaning either. Noticing the reaction you had to that moment gives the scene a certain clarity that trying to analyze it might never be able to. If meditation teaches us to be mindful of our existence, meditative qualities in games could make us mindful of existences we might otherwise never be able to experience.