Every neighborhood has one. That one park or school or restaurant that had the playground you never could turn away from. My brother’s school had one — the twisting, wooden spires of his montessori, and the sheer size! It was enormous, with byzantine pathways, ample room to hide, and several walk ways.

Ole B. Nielsen and Christian Jensen make *those* playgrounds.

Founded in 2003, Nielsen and Jensen’s design firm Monstrum has created some of the most fascinating playgrounds in Europe and this year won a Danish Design Award. Monstrum’s constructions are carnivalesque and whimsical in their construction. The “Blue Whale,” commissioned by the city of Gothenburg, is a 50-ft colossus with a climbable exterior and hollow interior for children to explore. There’s the enormous twisting snake of Meldgård Forest and contorted buildings of Brumble City; they appear to suffer from epileptic fits. All of Monstrum’s projects depict a world that isn’t quite as it should be, but perhaps as it could.

I spoke to Nielsen earlier this month. He has a thin profile and is balding slightly. He started building playgrounds when his son’s school needed one, but before that he had built sets for theatre. The connection seems natural — one is a stage for actors to play; the other is a stage for the playful to act. Nielsen says the look and feel of set design was useful in their work as well. It’s got a visual dimension in terms of something in front and something behind,” he says. “There are small things you can pull and push and it’s the same thing on the playground where you have slides and mechanics.”

Nielsen’s training as an artist is readily apparent. American playgrounds tend to be cold, built of steel and adorned with nothing. Play is reflected as a serious pursuit, a by-product of commerce. Monstrum’s’ creations are Siberian larch and birch plywood. “It’s both easier and harder,” Nielsen says of his aesthetic training. “You have expectations as an artist. You dont have that on the playground. Nobody will judge if it’s sufficiently cultured.”

But the judges are perhaps more fickle. Children follow their impulses. Either a play space works or it doesn’t and children don’t possess the language to describe why something doesn’t feel right. That constraint means that Monstrum’s designs must be completely intuitive. Nielsen points out that a slide and swing are paragons of design because you know exactly how to use them at first pass. “Playgrounds have to be simple,” he says. “We’re trying to inspire your fantasy as well as your stomach.”

One of the chief challenges, of course, is safety. Looking at Monstrum’s designs, I see children clambering over each other, sometimes at an apparently great height. In the States, the tendency is to rough out all the edges, but Nielsen says that sense of challenge and adventure is crucial to building a good playground. That means dealing with safety inspectors and pushing at the edges of how to interpret the rules. “We want to make safe playgrounds that look dangerous. That’s inspiring to kids. Kids recognize their own responsibility.”

In the end though, it’s up to kids to figure out what Monstrum’s creations actually mean. “You don’t want to tell a complete story but you want to paint a picture.” 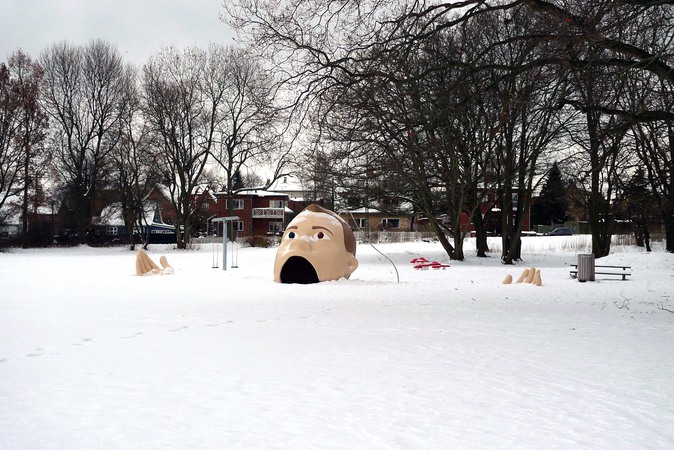