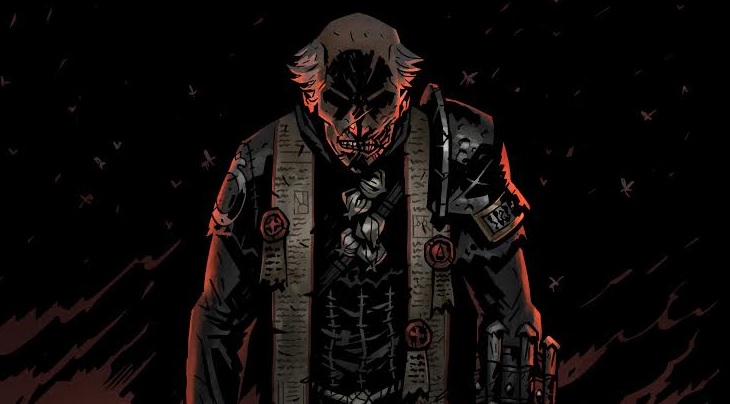 Red Hook Studios announced back in October that Darkest Dungeon, its dungeon crawler about the psychological stresses of adventuring, would be getting DLC in early 2017 called “The Crimson Court.” Today, we’re able to bring you the first reveal of that DLC with the introduction of a new character called The Fanatic.

As was teased previously with the Crimson Court poster and the tagline “The Blood! I must have the Blood!,” the DLC carries a Vampire or Parasite theme. The obvious addition to Darkest Dungeon, then, would be a Van Helsing-type vampire hunter that you could add to your party of heroes. “The community was quick to suggest this as well, but we at Red Hook always try to put a different spin on things, so we thought a great twist would be to introduce a vampire hunter, but have him be hunting you,” said Chris Bourassa, creative director at Red Hook.

The Fanatic is that vampire hunter. There’s a chance of him chasing and stalking your party if any one has contracted the “Crimson Curse” and steps foot into the dungeon. “The Fanatic will attempt to burn party members at the stake, improving his resilience by reading holy verses as the flames sear his victim,” Bourassa revealed. “Damaging his pyre will fill the Fanatic with zealous rage, emboldening his attacks and imbuing his warhammer with holy light. So it’s a (literal) damned if you do, damned if you don’t encounter!”

The Fanatic will be another of the “wandering bosses” like The Collector and The Shambler in Darkest Dungeon. A proper threat that you’ll want to avoid but will have a hard time doing so if he’s after you. Bourassa said that the team has been experimenting with custom audio cues that will let you know when he’s near, so perhaps you’ll have some warning at least.

As far as the visual design of The Fanatic goes, Bourassa told me he wanted to steer away from the classic vampire hunter tropes, like tall hats, gadgets, pouches, and crossbows. He’s more of a mad monk type of figure. “I imagine him as having gone rogue from the church, hunting the Crimson Court anywhere he can find them,” Bourassa said. “His scarred face gives the impression of having had a serious entanglement at some point in his past—perhaps that’s what finally drove him over the edge.”

“He’s got a few iconic vampire-hunting tools at his disposal—stakes, garlic, and prayer, but he’s given up on himself—he’s scarred & dirty,” Bourassa continued. “Nothing matters to him anymore except the pursuit of his righteous cause!”

Wherever possible, Bourassa likes to give the heroes and villains of Darkest Dungeon a signature weapon. The Fanatic’s is the warhammer as it felt like a great fit to Bourassa, plus it hasn’t been used anywhere else in the game. “The hammer has a ‘V’ on it, so when it’s heated up, every hit brands you as a Vampire,” he added.

Darkest Dungeon’s “Crimson Court” DLC will be coming out in early 2017 for Windows, Mac, Linux, PlayStation 4, and PlayStation Vita. Look out for more information on the game’s website.