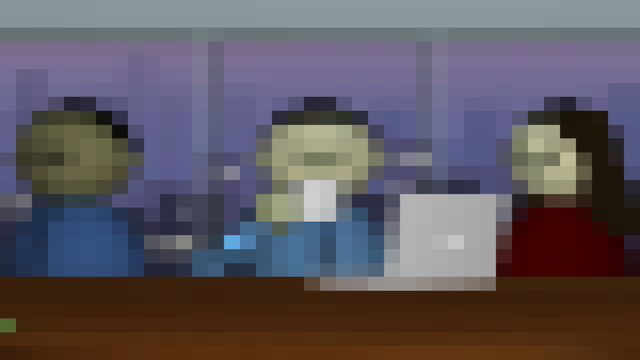 The Meeting by Matt Bethancourt is a simulation of the secret ritual of the office gathering. It plays almost uncannily similar to those HR-mandated “hang outs” that kick off your work week, where Cindy airs her unending grievances about the break room bandit and everyone votes on when to have the office Christmas party. Following a minimal title screen, The Meeting drops you right into a room where the din of ringing phones underscores the garbled speech of a Peanuts teacher, which presumably belongs to your boss.

give in, let go

But your true enemy in The Meeting is not the wah wah wah of your boss and their less than inspirational speech. It’s your eyelids, fighting the repercussions of lack of sleep, or a hangover, or too much Netflix. At the bottom of the screen, a bar fills up while the sounds of the office grow distant. It is your call: do you let the real world get further away, or do you tap your screen to jolt awake? Press the screen, and the world rushes back, with the symphony of phone rings returning in full force. But give in, let go, and you invite a whole new world to engulf you.

Though it’s a simple interaction, the wake up mechanic in The Meeting perfectly captures the experience of both fighting sleep and drifting off. There comes a point in every “just resting my eyes” nap where you must decide whether to stay in reality, or, or turn your back on it and give in to the sweet, seductive call of surreality. As in real life, the difference in The Meeting is no bigger than one small and almost unconscious choice.

When the office world begins to vignette, you’re given ample time to make the adult decision and return to the meeting. But, wait long enough, and a piece of procedurally generated music begins to play. It sounds like the opposite of your office soundscape: with tinkering bells instead of startling phone rings.

one small and almost unconscious choice

Falling fully into a doze not only opens you up to this pleasant reverie, but also causes all sorts of funny things to happen to your head. Once fully immersed in sleep, your head becomes a floating object in space that can be controlled through your phone’s gyroscope. Move it backward and forward through the stars while the music responds to your inputs.

Just be careful that you keep your fingers off the screen. Because even the tiniest of pokes sends you hurtling back into a corporate nightmare. Thankfully, space world remains only a nap away.

You can download The Meeting for free on iOS here.