You embark on a wager to circumnavigate the globe in 80 days or less. Your journey might be made on the slow trudge of mechanized camels, aboard whisper-quick copper airships that defy gravity, or even on a certain famous submarine, many leagues under the sea. Your travels might even find you flirting with death. These journeys, and many more, are available to you in the world of Inkle studio’s 80 Days (2014), the world that writer Meg Jayanth built.

As a brown female writer in videogames, Jayanth is something of a rarity and, taking into consideration the haul of awards brought home by her for the writing in 80 Days, she more than deserves the label of ‘unique individual’. This specific individual is one who has been immersed in virtual worlds since she was young. “My parents bought a second-hand PC when I was five years old, and I was obsessed. I had a stack of MS-DOS games on floppy-disks,” she tells me via email. It seems appropriate that our talk about 80 Days is made of messages shot halfway around the world at the speed of information.

The player’s imagination brings the scenes to life, with Meg’s deft language providing the blueprint

Jayanth says she finds herself mostly playing independent games these days, her love of interactive fiction being the hook that keeps her coming back. It’s that interest in narrative that elevates 80 Days; cities and routes shining with life and character, each with their own carefully crafted stories, their own mini-narratives. The game places trust in its words and measured artwork to bring its stories alive. The player is an active component in the game’s machinery, their mind’s eye the tool bringing the scenes to life, with Meg’s deft language providing the blueprint.

The game reportedly has a total script of over half a million words, players seeing but a fraction of this during each playthrough. This makes each playthrough fresh, the player constantly faced with decisions and having to choose between different routes and scenarios: Trans-siberian express or airship? To help out a rebellion or slink away? Cheap and slow, or quick and expensive? These decisions make the player an explorer in the game’s rich world. Talking about the game with friends becomes a discussion of discovery, each person picking up on places and stories they never knew existed in its world. 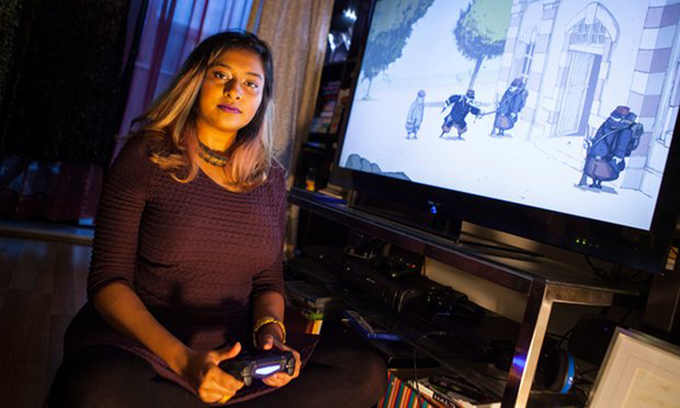 Photo of Meg Jayanth via Antonio Olmos for the Observer

Jayanth feels that 80 Days addresses the problem with many modern games, where a modicum of choice is offered, but with any meaningful impact stripped from it. “Narrative decisions in and of themselves aren’t enough to make players feel immersed in a world—players need to feel as though the game is responding to the choices they’ve made. That they’re being listened to and respected,” Jayanth told me. “I think the best designed narrative decisions are indistinguishable from gameplay rather than separate or removed.”

80 Days is, of course, based on Jules Verne’s 1872 classic Around the World in 80 Days. It’s a book grounded in its time, whose core story is that of a rich white guy and his valet romping round the world for a wager, walking the boundaries of the British empire—themes of colonialism and discrimination seeping into every aspect. 80 Days takes Vernes’s setting and co-opts it, challenging these themes, and in so doing crafts a new, different world. A world where automata are an emerging technology, where women are free to be airship pilots and mechanics. A world where colonialism is still a cause for concern, but has taken a different direction to that in our own history. With stories of a past world combined with unique technology, Jayanth has drawn comparisons with steampunk, though the preferred term for the style is Victorian Futurism.

comparisons are drawn with steampunk, though the preferred term for the style is Victorian Futurism

However, while the stories and geopolitics of 80 Days are fiction, this invented world has a bedrock built on exhaustive, meticulous research. One of the biggest challenges was finding accounts sourced from the places themselves, untainted by an outsider’s perspective. Every location deserved respect and representation. “The steampunk added another layer of complexity,” says Jayanth, “much of my research involved attempting to ground fantastical inventions or devices in local cultures and aesthetics, and delving deep enough into a region’s geopolitics to be able to play out the consequences of those fantastical changes in a way that felt respectful and engaged with the history and culture of a given place.”

An important part in creating such a different world for Jayanth was to give a platform to those voices normally whitewashed by history, people whose stories have never been told. It’s not that these people weren’t developing their own cultures and experiences, they just don’t make it into our accounts. “History is written by the victors. But all we need to do is dig past the simplistic narratives and scratch past the veneer of easy stereotypes,” Jayanth says. “I want my work to be full of women, people of color, queer people, and marginalized people doing amazing things all through history—because they did.” Their stories have been edited out and forgotten. Jayanth wants her work to act against this erasure, boldly saying “These histories belong to all of us, and we’ve waited long enough to take them back.”

One option that Jayanth had to fulfill her wish was to make 80 Days a power fantasy for the downtrodden, placing them in the roles previously held by their oppressors. But she isn’t one to take the easy route. The silenced are certainly given a voice in the game, but that doesn’t mean that theirs is necessarily the voice of reason or fairness. They are found living in places both fantastical and commonplace. Some land themselves positions of power, while others are left to labor under a harsh sun. None of them however, from bricklayer to queen, are denied the right to exist.

Sadly, the issues that 80 Days attempts to reverse aren’t confined to history. Women currently make up about 20 percent of the videogame industry, remaining a clear minority, one whose voices are rarely heard or represented in the medium for which they work. Fortunately, Jayanth’s career has found her in the company of colleagues supportive of improving inclusion and diversity.

“I feel lucky in my experience, and that’s a problem,” Jayanth says. “Many of my female friends and colleagues have faced—and still do face—hostility, indifference and harassment, and I don’t in any way want to diminish that; the wider atmosphere of games doesn’t feel particularly welcoming to women.”

It’s not that people weren’t developing their own cultures, they just don’t make it into our accounts

Meg is one of the select few women who give talks and make it onto panels. In so doing she feels that she is being put on a pedestal. “This is what it feels like to me, being a woman in games: that when I say something—in an interview, on a panel, in a talk, in my game, in a conversation—that I am not just speaking for myself, but also as a Woman In Games,” Jayanth said. That can feel like a constant, underlying and undermining pressure (and that’s not even getting into being a *brown* woman in games). We’re having lots of great conversations about diversity and inclusion as an industry at the moment—and that’s important, that’s hopeful, I think.” Jayanth hopes these conversations will help to usher in a new generation of women, women who haven’t been driven away from following their dreams.

Meg will be taking her message on the road at GDC this year, telling the industry how it can work to create more inclusive games. With this promotion of inclusivity, Jayanth believes we can rail against the prevailing culture, that we can make an impact.  Jayanth’s work on 80 Days has started to chip away at the foundations, and will hopefully be joined soon by the many more works she has to come.