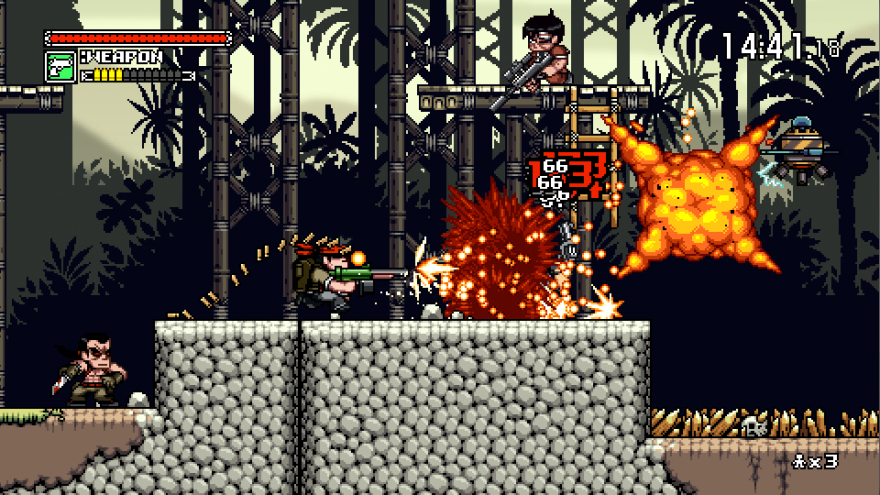 Writing about Ducktales: Remastered, where the homely pixels of an 8-bit platforming classic are dressed up in slick high-definition animation, Jon Irwin framed nostalgia as a way of remembering things fondly by remembering them incorrectly, not warts-and-all. The facelift Wayforward gave Ducktales is a concrete manifestation of the way we mentally upgrade our cherished experiences. We make them fit our modern standards of amazement.

But it’s not just our individual memories that time has a corrosive effect on. It also breaks down the walls between each memory. When I was a child, each game felt like its own world, self-contained and complete. But my memory freely blends aspects of Ikari Warriors and Jackal, misplaces moments from Silent Hill in environments from Parasite Eve, confuses Bionic Commando radio transmissions with Metal Gear ones. World spills into world; actual games blur into my dreams about them. The cartridges that once stood in tidy rows on my shelves are now likely in a landfill, and I imagine them melting together in the sun, becoming the same lumpy mass they are in my mind.

That porous aspect of nostalgia is wonderfully exploited in Tribute Games’ 16-bit-style action-RPG Mercenary Kings. The game is a vivid stew of faulty memory where a variety of retro classics are simmered together under a very contemporary open-world mission-based system, the latter perhaps inspired by Borderlands. The most prominent old-school influences are Contra—which is saluted explicitly in the game’s cover art; implicitly in its co-op run-and-gun play style—and Metal Slug, which is immediately called to mind by chunky character sprites and over-the-top explosions.

But mostly, Mercenary Kings avoids empty-caloric memory ballast and spins out its inspirations into a robustly layered, surprisingly large game.

You also catch whiffs of Mega Man in your character’s grounded range of movement, with a limited jump but a fleet roll, and the knife-slashing melee is straight out of Rush’n Attack. Since ammo is unlimited—a timed button press determines the effectiveness of your reload, but it never fails—the knife is fairly pointless, and seems to exist mainly for the sake of homage. I wound up mapping it somewhere inconspicuous to keep my jump and shoot commands handy. But mostly, Mercenary Kings avoids empty-caloric memory ballast and spins out its inspirations into a robustly layered, surprisingly large game.

Of course, you are facing off against a shadowy evil organization whose name just happens to acronym out into something sinister—in this case, CLAW, whose troops patrol fixed routes with guns and bayonets, re-spawning the instant you scroll the screen. Starting from a base camp hub where you can buy items, craft equipment, join four-player online co-op games, and most importantly, take missions, you sally forth into side-scrolling 2D environments with the goals of rescuing hostages, killing a certain number of a certain enemy type, or gathering specific crafting resources.

The action game is tight, fast-paced and fairly simple—it’s mainly four-direction shooting and platforming, with some light block-exploding strategy—but the RPG overlay is extensive. There are 60 missions in the early version, with 40 more promised in the full version, and while some of the mission types feel interchangeable, others add new dimensions to the game. Resource-gathering missions,  for instance, replace aggressive soldiers with skittish animals, forcing you to switch from a balanced offensive-and-evasive approach to a bolder, quicker one. I put in a couple hours before I started clearing missions, and players who want to go the distance will find a very generous amount of game here. It’s like revisiting a 16-bit classic and finding it to be as large as you remembered, rather than startlingly short, in this age of save-anywhere emulation.

Mercenary Kings exploits nostalgic erosion in a peculiarly contemporary way. For all of its ‘80s and ‘90s nods, it feels perfectly apace with a current pop culture that is obsessed with the past but heedless of its boundaries and hierarchies, where rap joyously mingles with country and dubstep with pop; zombie novels with Jane Austen; twerking with Miley Cyrus. Mixing a little questing and crafting with your run-and-gun seems almost conventional rather than genre-busting, now that all the old genres have already been so thoroughly busted. Mercenary Kings is 16-bit gaming exactly how you remember it—which is to say, not very much how it actually was.