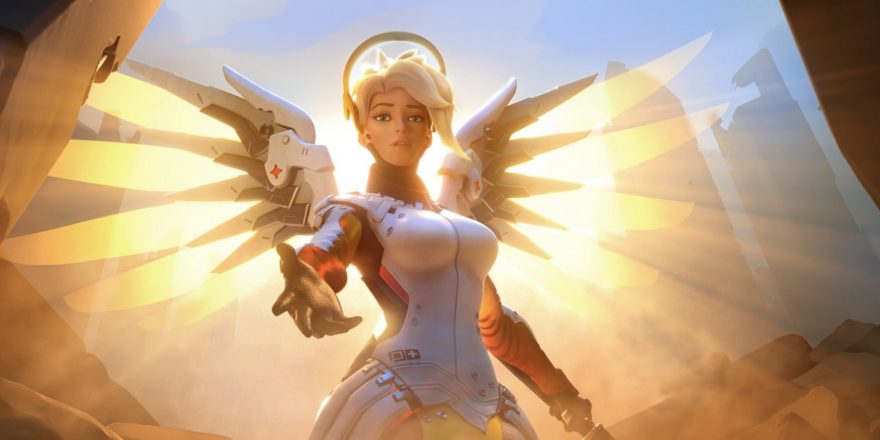 Watch her dance through the backline, a gossamer beam of gold and azure granting vitality and strength to her allies. Watch her float high in the heavens with Pharah, lingering there like a blond-haired specter of love and death. Watch as your team empties clip after clip on the enemy Reinhardt, only to realize in white-knuckled horror that Mercy has been around the corner healing him the whole time. Observe in frustration as the enemy Mercy glides to her allies at the very last possible moment, dodging 10 high-cooldown abilities and throwing your entire team on tilt.

you will never again misconstrue her words

Rejoice in certain victory during the final 30 seconds of the game as your team finally sets up its glorious three-Ultimate stack, massacring the enemy and walking the payload toward its final destination. Then listen for the three most ominous words in Overwatch, yelled in glorious, unmistakable German: Helden sterben nicht!

You can’t translate it, but you know exactly what it means. Five ghost bodies emerge from the void, manifesting into meat and steel before your eyes. As they eviscerate your sad, impotent comrades, you are powerless to do anything but sit there quietly in the backline, awaiting a lonely, miserable death.

And there’s the enemy Mercy, halo around her head, corners of her lips folded up in an eternal smirk. From this moment, you will never again misconstrue her words: when she exclaims in triumph that Heroes never die, she’s not talking about you or your teammates—she’s basking in her own damn glory.

Ana – Ana is the protective mother we all want
Lucio – Inside the idiot party-bubble of Lucio
Symmetra – Go ahead, sleep on Symmetra
Zenyatta – Praise be to Zenyatta, then chill the heck out