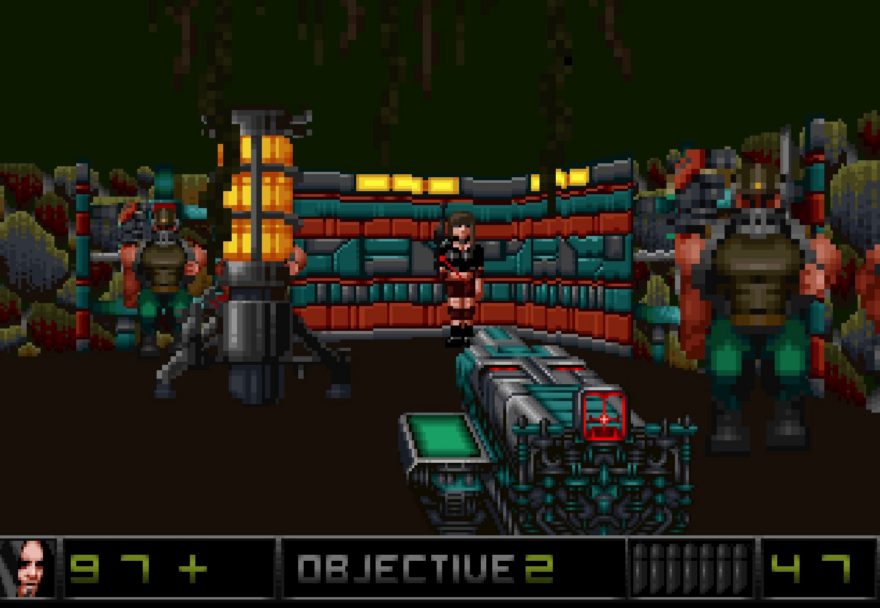 Nostalgia for the 1990s seems to have become the stock in trade for videogames over the past few years. I’m thinking of the tongue-in-cheek revisit to MS-DOS’s glory days of Vlambeer’s GUN GODZ (2012) and the brutal, tasteful modern reconfiguration of the 90s shooter in this year’s Devil Daggers.

But these are exceptions, as drawing from that well is typically an exercise in diminishing returns. A new shooter, Merger 3D, is testament to this, as it showcases the best and worst of the 90s shareware aesthetic. The title weighs in at a svelte 10 MB, and supposedly will run on every Windows OS released in the past 20 years (if you can somehow manage to get Steam running on Windows 98).

Aside from the option to play in modern widescreen 16:9 or CRT-legit 4:3, modern niceties, such as editable options of any kind or a map, are out the window. Quit whining about remappable keys and get to the important stuff, you pansy: get out there and kick some mutant ass.

In a plotline that reads like it was generated from a “90s action movie” grab bag of magnetic poetry, you’re a soldier out to destroy bio-terrorism as a result of human cellular modification. Along for the ride is your “special unit formed by mercenaries who opposed human extermination,” in case you were worried about our heroes being on the wrong side of the hot-button issues of the future.


Merger 3D manages to provide a stiff challenge with health and ammo in short supply and zero reliance on auto-aim, but ultimately falls into the trappings of so many bargain-bin titles of the 90s. FPS forebearers like Doom (1993), Wolfenstein (1992) and Marathon (1994) are still held in high regard by allowing the player to rely on strategy of movement around an arena, of which Merger 3D completely ignores. Enemies hone in on the player’s movement the second they’ve been spotted, making confrontations more a matter of hammering the fire button in every direction rather than the gloriously cheeseball ballet of death it ought to be.

Shareware titles were novel in the fact that you were able to take your new, expensive PC and find something to run on it—it didn’t much matter what it was. For every classic like Doom or Commander Keen (1990), there was a Bio-Menace (1993) or Jazz Jackrabbit (1994) to slog through. Merger 3D certainly isn’t the worst throwback title to hit Steam Greenlight, but it calls to mind the games that the 10-year-old version of me would probably own on a hand-labeled disk, rather than one I’d plunk down my hard-earned allowance money on.

You can purchase Merger 3D on Steam.