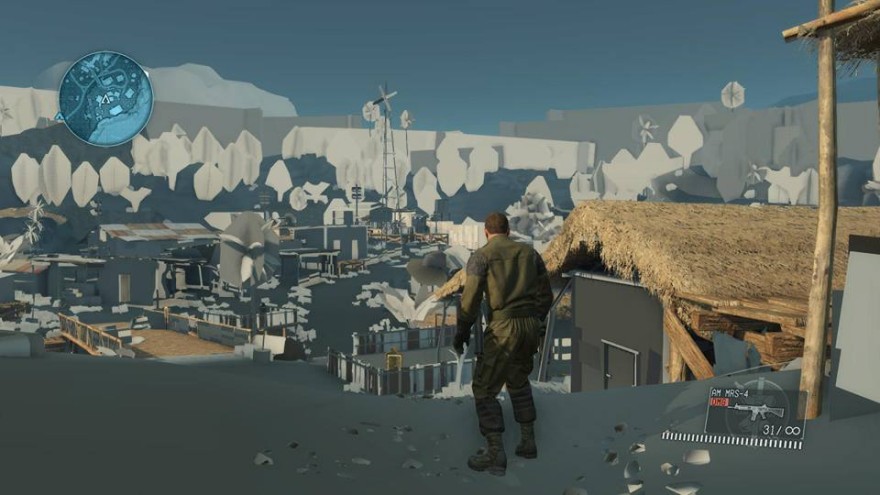 As an escape from its arid deserts and flustered robot politics, Metal Gear Solid V: The Phantom Pain offers Mother Base—an offshore plant near the Seychelles, a place to chill out between missions, where you can overlook the surrounding view of the ocean blue. Even so, it is still made of refined steel and filled up with saluting soldiers calling your name; hardly a proper retreat from the battlefield.

What you might want instead is somewhere populated by paper trees and where shrubs and bushes are cut out from rigid stencils. Think of something resembling the material world of Tearaway: inviting you to scribble on its colorless shapes, to put aside your assault rifle and frolic through an overgrown garden to experience only wonder. Now that would be a true vacation.

put aside your assault rifle and frolic

That’s exactly what Konami delivered today with the launch of Metal Gear Online for PlayStation 4 and Xbox One. Unfortunately, it turned out to be an accident. Glitches to be more precise. And so the textureless, papery environment that Cee Thomas discovered when booting the game up today was only temporary. Fortunately, he captured it in a few screenshots, as you can see above and below.

Thomas shared the glitchscape in a private Facebook group but these images are too good not to share. They resemble artist Kim Laughton’s view of Grand Theft Auto V, in which she stripped the game of its textures so that Los Santos resembled a smog-filled husk of a city. Here, in Metal Gear Online, these glitches remove the austerity and lifelike qualities of the game’s open world hub area in favor of a more fantastical space. It makes the player character feel small, as if they’ve been shrunk down to a minute size, the trees like blades of grass in someone’s back yard. Yes, it looks like Honey, I Shrunk The Kids.