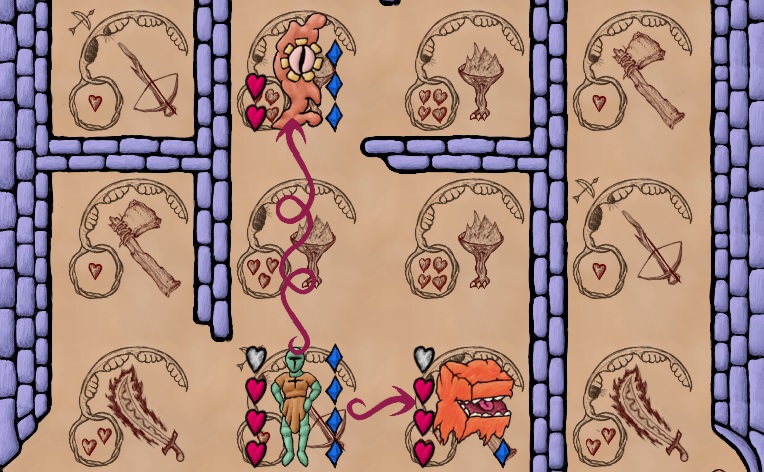 Michael Brough excels at designing systems that are simpler than they sound—better understood through exploration than explanation—and his grid-based games keep getting smaller and more complicated. In Imbroglio, his latest, your little dungeon-crawler has two health counters in the form of hearts and diamonds. Hearts are damaged by red monsters, diamonds by the blue ones, and you can do damage to their hearts or diamonds if you’re standing on a red or blue weapon tile respectively.

In some of Brough’s previous work—like 868-HACK (2013) or Zaga-33 (2012)—you gain abilities by collecting them during play, but in Imbroglio, they all start out right there on the board. Killing an enemy while standing on a tile feeds that tile—four kills levels it up and nets a rune you can use for your hero’s special ability. After a few games, you can unlock the ability to rearrange the tiles to your liking. Brough has described this element of the game as “deck-building,” but it feels less random than waiting for a particular card to pop up out of your Netrunner (2012) deck.

Instead, you spend time drawing monsters into corners and taking a couple points of damage to put them right where you want them. You advance the game by collecting gems, which reset the maze and give you one of each kind of health, so instead of running around trying desperately to not get hit, you’re getting hit on just the right move, leveling up the shield so you can increase your maximum health anyway.

One tile feeds every surrounding tile when it levels up, another starts out incredibly strong and loses damage as you use it. Another lets you respawn. Like a deck-builder, you start with the perfect synergistic plan and end up flying by the seat of your pants, hoping you can level up and use a stun at a life-saving moment.

I sort of miss the garish pixels and mouthy sound effects of Brough’s glitchier-looking titles, but the sound design in Imbroglio is as generative and weird as the rest of it: each action—an attack, the appearance of a new monster—is punctuated by the scratchy and very physical sounds of an acoustic guitar. It’s not complex, but playing and chaining together moves feels like building a soundtrack suited to your own bizarre quest.

I’m still trying to unlock a few characters (the last one requires you to unlock a whopping 128 gems with four of the other heroes) but if if it’s anything like Brough’s other games, I look forward to something that completely inverts most of what I’ve learned so far. While it’s much more intricate, Imbroglio is also one of the least obtuse games Brough has released, and I’m stoked to swap strats with anyone I can convince to give it a try.

Imbroglio is available to purchase on the App Store.