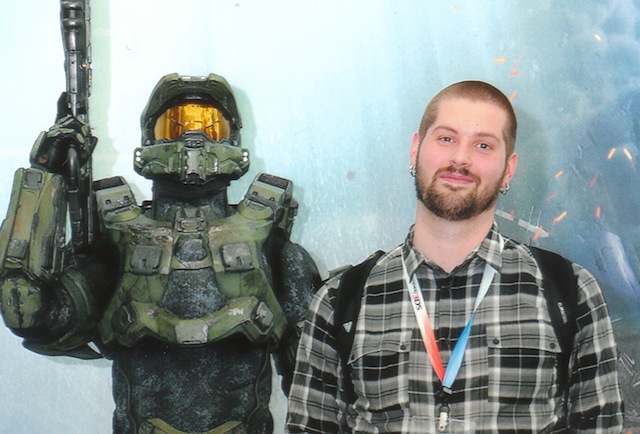 “You can’t stand there,” she said, pointing to the spot where I had just seen seven people stand, contented, to take their pictures with Master Chief. The photo op was attracting a trickle of gamers; the final hour of the final day of E3 is like last call at a cavernous bar, with more useless swag and less thwarted sex, and 343 Industries put Halo‘s taciturn hero right by the exit, fishing for the “might as well, I’m about to leave” crowd.

Even though I was representing a popular games website at E3, my motives here were selfish – literally self-aggrandizing. Even in his conspicuous platform footwear, the actor playing Chief was looking short. The Halo 2 manual lists a fully-armored SPARTAN super-soldier at an even seven feet. I’m six feet eight, which gives me a pathologically acute sense of things that I am taller than (doorways, showerheads, etc.). I stepped into line, ready to tower.

Somehow, Chief’s two handlers were prepared. “You can’t stand there,” she repeated, looking like she was reconsidering the entire idea of a career in video game PR. “That’s unfair,” I said. “I’m sorry,” she replied, not sorry.

What? Of course, plenty of kids play Halo (they’re vulnerable to sticky grenades), but it’s not as if I had ripped the beard off a mall Santa and shouted “See! See!” I think basically everyone knows that Master Chief isn’t, uh, real.

I stepped off the podium, onto the floor, and they took the picture.

I had so many questions. Were the handlers warned that this might happen, and coached on the appropriate reaction? Does it affect Microsoft’s bottom line if an E3 promotional snapshot reveals the fact that Master Chief is not always seven feet tall? Is anyone allowed to make Master Chief look small? What if Shaq wants a picture? Someone knows the answer to these questions, and that makes me a little scared.

The entire time, the guy playing Master Chief stood stock still, saying nothing. After my experience, I wonder what they do to people who try to get him to talk.