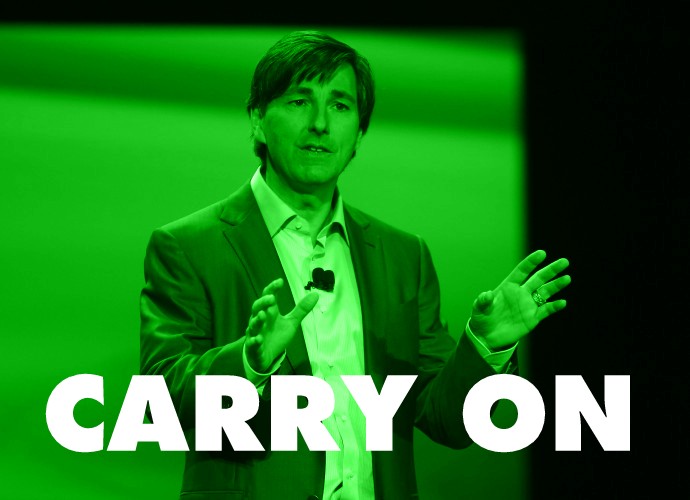 I’ve been trying to write about Microsoft for weeks.

The rumors of a new system based heavily on restrictive digital rights management, requiring an online connection and negating used games, swirled for months. On May 21, Don Mattrick revealed the newly christened Xbox One, and did little to dispel such rumors as truth. The final stake in the heart of all those loudly bemoaning Microsoft’s new tactics came at E3 this month; indeed, this would be a new kind of home console, where discs act as envelopes only, transporting code from warehouse to store to home, whereupon all games would return to their innate form and exist as bits.

Used games would need to be re-activated for a price. Strange restrictions bubbled up from multiple cracks: Your system would check-in online once every twenty-four hours; without a connection, your games wouldn’t play. Also, digital loaning was possible, but only once, and only to friends, and only to those friends who you’ve been friends with for thirty days, and then only if they like you, but not if they like-like you. I’m kidding of course, but the suggestion’s tenor matches that of Mattrick and his team’s messaging thus far: Confusing, tone-deaf, and scatterbrained.

Until last Wednesday. In an update posted to the official Microsoft website, Mattrick revealed a swift change in perspective, highlighting two major changes to their Xbox One philosophy. 1: “An internet connection will not be required to play offline… games.” And 2: “Trade-in, lend, resell, gift, and rent disc-based games just like you do today.”

The message coming out of Redmond: We’ve heard your pleas. Listen carefully, though, and that last syllable is the one ringing loudest, reverberating through the canyon of pre-release hype that almost sank the platform before it set sail: “Please.” Come back. Just give us a chance. Whatever you want.

Well, they gave us what we wanted. Or at least, they gave the vocal minority, that subset of internet community found on forum threads, and Twitter, and YouTube who have raged, raged against the dying of their used games economy, what they wanted. Or what they think they wanted.

If we’re honest, Microsoft’s “autocratic” policies were nothing new. Where they were headed looks (excuse me: looked) a lot like where we stand with digital music. And digital video. And digital games on mobile and PC. And 21st century consumers seem A-OK with Netflix, Spotify, and their hundreds of apps, all locked to your device, all limited in resellability. As William James, famed psychologist and brother to Henry, once wrote: “Lives based on having are less free than lives based either on doing or on being.”

But the elder James died in 1910. They didn’t even have DVR back then. What does he know about our present-tense woes? More to the point, what do I know?  Console games are expensive and so the ability to re-sell them is important, says David Weinberger, a senior researcher at Harvard University’s Berkman Center for the Internet and Society. “We were already accustomed to a model in which movies are streamed,” he wrote in an email. “Netflix didn’t seem new or disruptive. We don’t have that model for games.”

Joseph Conrad would be proud of that last sentence. It spotlights the ultimate Catch-22 of Microsoft’s failed attempt at trailblazing. Since we don’t have a model for this new form of game distribution, we won’t understand it. And since we don’t understand this model, we don’t think we want it. And now we won’t be getting it, thanks to Microsoft’s swift-ish response to a backlash perpetrated before we ever used the thing. Last week, as the news spread, cries rang out like victorious gunshots fired into the air; no need to waste bullets on the target any longer.

And yet for all he didn’t say, I’ll let the title of Weinberger’s 2012 book make a statement for him. Too Big to Know: Rehinking Knowledge Now that the Facts aren’t the Facts, Experts are Everywhere, and the Smartest Person in the Room is the Room. The “facts” about games were about to change; a disc was about to become a plastic circle with little value. Perhaps Mattrick’s boasts about digital-sharing and cloud-access of your entire game library were more than just bullet-points propping up an evil ploy; maybe these were seeds of a new way to play, and pay for, games, a way in which publishers, retailers, and consumers all benefited.

We won’t know now. The backtracking on used games and required connection took those forward-looking abilities off the Xbox One features list. I imagine Weinberger’s “experts are everywhere” phrase is meant to herald the internet’s ability to suss out a random genius found in a pack of strangers, or the pure power of crowd-sourced information. But it could be read facetiously: we all think we know everything. Even when we clearly have no idea.

I can’t help but hear a trace of awe, a desire to be among the future-shocked.

In his 1970 book Future Shock, Alvin Toffler presaged an era of communal goods. While predicting the results of a post World War II industrial boom and the effects of global communication, Toffler considered a trend of the time: Rentals.

“If the people of the future live faster than the people of the past,” he wrote, “they must also be far more flexible.” Car rentals lead to furniture rental. Entire buildings became modular; everything was becoming temporary, transient. Obsolescence was the new constant. Toffler’s thesis centered on the abrupt change taking place in modern society, and how that change would dramatically affect its citizens. Note the all-caps tagline: “THIS BOOK CAN HELP US SURVIVE OUR COLLISION WITH TOMORROW.” His tone is one of fear, the cautioning of a people to turn back even as they barreled forward at an irrevocable pace.

But underneath the scare-tactics, I can’t help but hear a trace of awe, a desire to be among the future-shocked: “They want the advantage of affluence and the latest that technology has to offer, but not the responsibility that has, until now, accompanied the accumulation of possessions. They recognize that to survive among the uncertainties of rapid change they must learn to travel light.”

Microsoft was about to shock us. Fearful, we pushed away, not ready to commit. We sided with the past and all its heaviness. Perhaps in doing so, we forgot what change means: In order to move forward, we first have to let go.