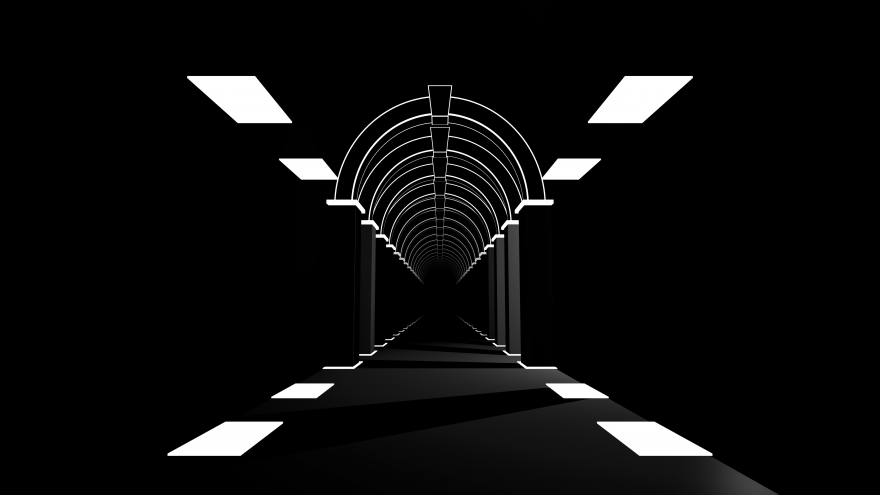 The dark, cutting lines and enormous Nihei-inspired megastructures of last year’s NaissanceE gouged open a hole. It hit a crest among those using videogames to explore an idea: one that combined wordless, inky concrete cities with abstruse glyph puzzles, all bearing a byzantine approach to structuring their alien mysteries. Nothing is explained in these virtual environments yet they seem to speak through their enormous volumes and chiaroscuro detail.

the journey expands to a gigantic machine’s artery

There will be more videogames that branch off its hair-raising moments—shimmying around huge chasms, chasing sentient machines through crazed corridors—but it will be NaissanceE that acts as the measuring stick for some time. One of the first of these inevitable projects is Mind-Mecca. I assumed its creators had made a mistake in summoning NaissanceE for comparison, but no, it turns out they have every right to do so. But I’d suggest that a more apt line to draw would be from Mind-Mecca to Aliceffekt’s similarly esoteric monochromatic adventure Hiversaires.

Both games bear a resemblance to Myst if it were designed by a midnight monolith. However, whereas Hiversaires maintains a sense of typical body movement through its corridors—you turn left and right, move forward—Mind Mecca throws away these limitations and splits its corridors into multiple perspectives, divided as if comic panels on a page. The effect of this removes the astounding 1:10 scale of your virtual body against the steepling architecture and, instead, draws focus upon the entire structure as a whole, each room—cramped or vast—a puzzle to solve.

That isn’t to say that scale isn’t used to overwhelm in Mind-Mecca. In fact, with this looser point-and-click format, the creators of Mind-Mecca have been able to play with scale even more. In the alpha demo, you start in a dead-end utility corridor (the creators suggest a prison cell), but once you dissolve the liquid-black door the journey expands to a gigantic machine’s artery, power surging through its honeycombed tunnels in tribute to 2001: A Space Odyssey. Then, once you’re through there, your mind map swells once again as you arrive in a giant hub—resembling the giant dome-like structure at the end of Terry Gilliam’s Brazil—revealing that the shaft you emerged from is just one of many that pocks the grand walls of this imposing nucleus.

From there, exploration resumes in the guts powering this unknown facility. You deconstruct a cipher by way of analytical guess work, opening new doors to get closer to more and more precious innards; first, a symmetrical sanctuary lined by black pillars etched with white lines, and then what appears to be a wretched angel with a grid panel resembling a Tenori-on sat on its chest. But you have to retrace your steps, as the technology isn’t activated by a flick of a switch, but through enigmatic sequences of actions that resemble an ancient ritual designed to safeguard treasure in a temple.

Getting through all of this requires attention to detail and a persistent curiosity. The entire opening area of Mind-Mecca sets up what the creators call “a place where patience is the most enlightening virtue.” Fortunately, it hasn’t been quite as testing as Hiversaires proved, which may have halted many who played it for longer than they could accept. With that in mind, perhaps Mind-Mecca will act as the gateway drug to these types of videogames. It’s more accessible than its peers but just as mysterious and darkly enticing.

You can vote for Mind-Mecca on Steam Greenlight. It’s due to come out for PC in 2016.