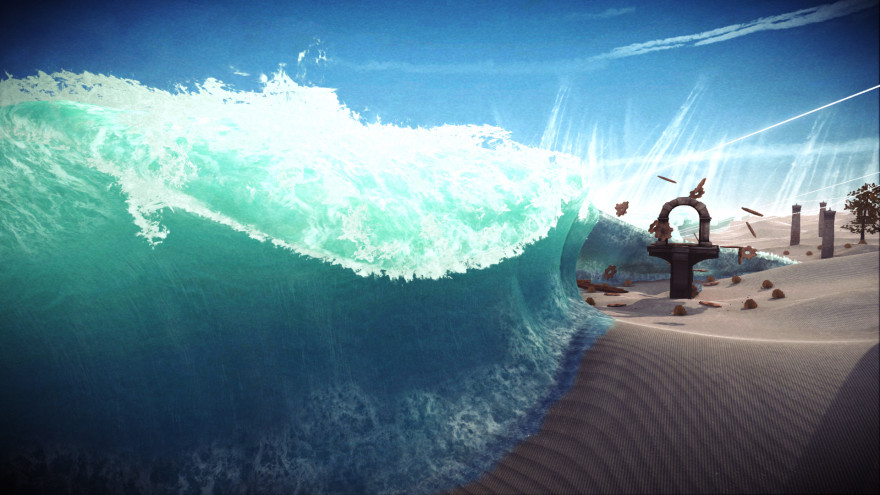 Mind: Path to Thalamus is the emotional aftermath of a careless father, one who dragged his children on trips to chase storms and other extreme weather. It’s a personal crusade that ultimately enacts cascading consequences: a fatal tsunami which swept away the narrator’s sister as he watched from the safety of a tree, his father nowhere to be found. A descent into drunken madness as a result of a broken family and an inability to believe in the truth of a sibling’s death. The narrator blames his father, but also himself, as he too chases extreme weather: the opening scene of the game is a massive tornado in which you must find your own daughter, named prophetically after your sibling.

And thus begins a decade-long coma through which Mind: Path to Thalamus is a journey. As you make your way to the heady metaphor that is a giant tree called Thalamus, the road is paved with obstacles in the form of weather/environment changing abilities. Special areas—marked by gnarled trees, lilies, cairns, or slowly rotating gears—affect fog, night/day, rain, and time, respectively. Stand in their areas—or leave a spindly ball of glowing neurons in them—and the fog will expand, the sun will set, rain will fall, or ruins destroyed by time will grow whole again. Mastering these will be the nuts and bolts of your journey, the tools that let you pass into new areas and build up, more like Portal than Myst.

Each map is nothing short of breathtaking in its complete disregard for spatial logic: chairs sit with their legs against walls, neat rows ordered to the ceiling. Railroad tracks truncate into blinding tunnels. Decaying ruins grow from an endless, ankle-high sea which reflects invisible, walkable segments floating above you. As the hollow avatar of the game’s narrator, you hold down W to move across these mindscapes, explore inner turmoil, solve puzzles, and listen to a voiceover that elucidates regret, dead sisters, drunken fathers, and shame.

It’s incredibly ambitious subject matter from a young creator, but at times, it falls somewhat flat. All of this information is delivered in voiceover that pops up at the beginning of levels, whenever you solve a part of a puzzle, and so on, often in ornamental language or via out-of-place references. Awkward, overly poetic phrases make the game feel like a high school where everybody’s really into quoting Neruda to their crushes, compounded by a young voice actor who has a hard time passing for a father, let alone one who has been ravaged by life and death. Entering a cave, with half-hearted conviction: “Into the belly of the beast. Unlike Jonah’s, mine was no big fish, but it was just as frightening, if not more so.” On the beach before that cave: “My alarming lack of a physical presence was too much of an existential threat to handle. So I didn’t.” And further into the cave: “Day and night. Light and darkness. Convenient opposites to explain away complex realities.”

At other times, the game presents the narrative in stunning, affecting manner. I had to take a break when I found myself in the calm center of a tidal wave frozen in time, surrounded by children’s drawings, Zen-garden sand circles, and a solitary, empty swing set, while longing piano notes mingled with the sounds of kid’s laughter. In the deepest recesses of a dark cave I found a crushed child’s bed frame, the pink headboard whole save for a cutout of a heart. Once, in a misplaced stone room rooted in an endless field, I turned a corner to see the soulless windows of a hospital that stretched out of a valley and into a vertical infinity. Inside were two elevators: one clinically empty, the other filled with roses.

But for all the visual greatness Thalamus exhibits, it commit a major sin: in what should be an interactive space driven by system and exploration, it relies far too much on narration. Mind: Path to Thalamus’ strength lies in the uncanny, sprawling beauty of its environments, in a surreal world where massive, crystalline neurons become pathways that reflect found-footage clips of children swimming or blowing out birthday candles, where children’s footprints lead to puzzle solutions, and where a drunken father’s rage physically manifests in the form of a stone giant. But the game seems to think these images can’t support themselves. In the dark blue fog of night I was surrounded by floating rocks punctuating an infinite abyss, but the moment was ruined by the narrator who felt the need to explain to the player what they were seeing through his eyes: “Such calamity and destruction lay before me, held up by no discernible force. I was in awe for the first time since I came into this world.” Telling, even when the player could plainly see.

This culminates in the final level, where an antagonistic version of the narrator throws out insults of self-doubt and inward anger, mostly related to the heavy metaphorical nature of the coma-patient’s made-up world: the neuron bridges, the path to a tree named thalamus. It makes sense on a surface level; when the narrator spouts flowery language, he also acknowledges the sheer absurdity of his speech, the heavy, occasionally hammy nature of his imagined world: “All of this sounds pretty cheesy or lame I’m sure. And it is. But honest truths tends to sound like that, we are so unfamilar with them.”

But towards the end of the game’s credits, this appears onscreen:

To pretentiousness, ostentation and pomposity,

because they are so easy to make fun of.

It’s a confusing dig. I had just spent hours getting involved in the emotional devastation of a narrator who drew me along on the journey; if the language was pretentious, it was purposeful, and the world, though heady, was well-designed, a gorgeous interpretation of brain maladies and metaphorical strife. And while the antagonist narrator tries to break it all down, the player narrator overcomes. These credits fall back in line with the jabs of the enemy, and I can’t help but think that on a certain level, Carlos Coronado, the game’s creator, is ashamed of what he made, either as designer or writer. At the very end, he pulls his punches, lessening the impact of the emotional and physical sorrow of not just the journey, but the game.

It’s a move that illuminates the game’s greatest weakness: it holds back. This manifests in the game’s puzzles: concepts are introduced and dropped before they reach a peak difficulty, and though the last few levels are fiendish, they’re missing a lot of the groundwork that the game laid early on. It’s also much too afraid to let its images speak for themselves without narration, too afraid to let the player find and deal with that emotional impact. Mind: Path to Thalamus is, at times, messy, but it’s a beautiful mess, one that still exhibits powerful moments of emotional impact that are so true to the game and the medium that it’s almost painful. If the narrator is the creator—or vice versa—he seems afraid of letting the player and himself falter emotionally or logically, as though there were something wrong with offering a player a piece of a broken heart.