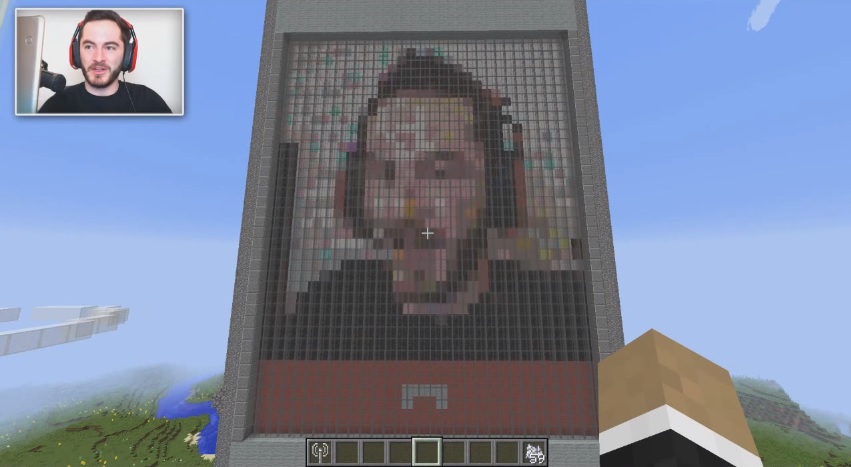 Oh, I remember the halcyon days of 2010, don’t you? When we were all flabbergasted by some guy who had spent days and nights constructing a 1:1 scale model of Star Trek‘s Starship Enterprise. It was a one-man architectural feat and, actually, it’s as impressive today as it was five years ago. But we can now look back at this as Minecraft‘s primitive and ancient history, pretty much in the same way we do the pyramids in Giza. I don’t think that Enterprise could even take off, could it?

These days we’re so used to seeing huge recreations in Minecraft that it takes a lot to impress us. The entire country of Denmark created with Minecraft blocks? Meh, it’s alright I guess. The Legend of Zelda‘s Hyrule? So-so. A detailed facsimile of World of Warcraft‘s Azeroth? I won’t say it again. We’ve seen all this too many times now. Give us something new.

How is that even possible?

And now someone has. If big-scale recreations are no longer enough to entertain all of us Caesars, then technological feats seem to be the way forward. You know what Verizon has recently done? It’s ridiculous. They’ve created a smartphone in Minecraft that can browse the internet and make video calls to actual people outside of the game. I know, I know: How is that even possible? Verizon has offered an explanation but it will probably only mildly temper your bafflement.

“In the world of Minecraft, almost everything is made of blocks. We’ve created a web application, Boxel, that translates real web pages and streaming video into blocks so they can be built on a Minecraft server in real time. Our server plugin uses Boxel-client to handle the communication between Minecraft and the real world as translated by the web application.”

The result of Verizon’s portal between the virtual and the real is showcased by YouTuber Jordan Maron in the Verizon-sponsored video above. As you can see, after crafting the smartphone as well as having automated engineers build him a cell tower, Maron is able to browse the internet in what is possibly the lowest resolution it’s ever been seen in, as well as call his tablet and the computer of a friend to have a video conversation. It works, even if it’s a little crude, but the achievement here is that this is able to happen at all.

Oh, and don’t miss the fact that when you do call someone else from inside Minecraft using its smartphone that the person on the other end sees your character inside the blocky virtual world. You can move your character around as normal in front of the smartphone and they’ll see every movement. It’s a bizarre state of affairs that, not only do we have video calling and it’s of common usage these days, but we’ve reached the point in the future that videogames are interacting with the real world in these ways now. Soon it’ll get to the point that you’ll never have to leave virtual reality and can still live your life as you otherwise would…