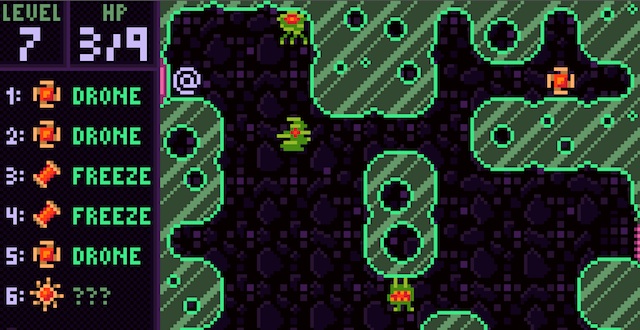 “@,” or the “at” sign, might be the most unappreciated character in videogames. You won’t see a cardboard cutout of @ at the local game shop. No one cares if @ is featured in the next crossover fighter or kart-racing game. I seriously doubt there is a single piece of fan-fiction written about @.

Once the hero of the massively influential role-playing game Rogue—a dungeon crawl from 1981 that used fonts for graphics—the ubiquitous little curly-Q gets no respect. Although Rogue inspired an entire subgenre of games known as roguelikes, outside of a small, avid community of hardcore nerds that resists graphics, @ has become something of a lost relic. It has been suppressed by the man—the cartoon man, to be exact—as found in many of the more talked about roguelikes: the red-nosed miner from Spelunky, the crying child in The Binding of Isaac, the valiant young explorer from Dungeons of Dredmor. Without @, they wouldn’t be here.

Thanks to Zaga-33, an outstanding coffee-break roguelike by the rising developer Michael Brough, aka “Brog,” @ is back on the map. Brough created Zaga-33 for the Seven Day Roguelike game jam in March, where it tied for fourth place, and he later refined it for release on the iPhone, Mac, and PC. (I personally recommend arrow keys.) The games that ranked ahead of it mostly look like the original Rogue: blank computer terminals with white symbols and letters arranged in the shape of squares and rectangles.

However, Brough subscribes to the school of thought that says games should look like they were made for your childhood game console. Zaga-33 ditches the typeface for friendlier art: The lone holdover from the computer time-sharing days is the @. Your archaic character looks like it was beamed from another dimension—out of the mainframe to an 8-bit planet (think Metroid) inhabited by highly logical, yet corrosive, alien species.

So what is @ doing in eight bits anyway? It appears to be some sort of clue to Brough’s objective design philosophy. By replacing what should have been a little humanoid avatar with a symbol from primitive computer code, Brough is stepping away from the idea that games should incite human emotions. This may be why his blog is jokingly subtitled “Hold Z to feel emotions.” He is taking a shot at games like Jason Rohrer’s Passage, which is held up as a shining example of how videogames can make us feel real-life feelings. Passage makes you sad because your character grows old and dies. But Brough rejects such sentimentality. In Brough’s spoof, Reverse Passage, you start out as a tombstone, which becomes an old man, who shrinks into an infant, and then crawls back into his mother’s womb.

They weren’t being emotional, or even humanistic, but stretching a set of finite conditions to the point of awe.

Brough’s position is doggedly opposed to that of a slew of acclaimed game designers, including Peter Molyneux (Fable, Milo), Jenova Chen (Journey, Flower), Jonathan Blow (Braid), and Rohrer, who think that the videogame industry can become cultured by serving up interactive existential metaphors that touch players deeply. They seem to believe that emotional responses can be hardwired into the logic of a system in order to get around a game’s mathematical nature. Yet their statement is a non-sequitur, reading like a misspoken quote from the Buddha. Q: When is a game not a game? A: When it makes you cry.

Brough has a simpler solution: Code can be expressive all by its lonesome. We don’t need to empathize with “@,” choking up when he loses the love of his life “&,” because he gave her rotten food to eat, or a cursed ring of levitation, which reminded us of our frail, random existence—just like we don’t need to personify electronic music or abstract art to be moved by it. We need games that are made by people who are inspired to code like Stan Brakhage deconstructed film, or Edgar Froese played the Mellotron. They weren’t being emotional, or even humanistic, but stretching a set of finite conditions to the point of awe.

Zaga-33 is on the right track. Brough has developed a distinctive minimalist style defined by math. As his code shows, logical calculations can add up to an aesthetic experience. Randomly generated levels and turn-based play are part of the roguelike code of ethics, but here they lead to a greater encounter than with a level 22 lamia on the 15th floor. Yes, these conditions are proven to be mechanically sound. That’s why people are still making roguelikes 30 years later. But Brough demonstrates that the formula can bring about more than good gameplay.

If you approach Zaga-33 like an analog Pac-Man, instinctively running away from the bad guys and devouring them when you have a power-up, you won’t get very far. You need to pay attention, analyze every move in detail, and think two or three turns ahead. After awhile, you learn the movements of enemies, who rove about the grid like well-oiled automatons. Here’s a partial list: Dervishes move at random. Goblins move at random until they are across from you. Snarks move back and away. Others, like the large cat and the slime that walks upright, are harder to read, but there is certainly some reasoning going on in their pixelated minds.

Brough is stepping away from the idea that games should incite human emotions.

Only after you carefully inspect these dimensions of play does Zaga-33 bloom into a beautiful game. The walls of the bright green maze, which are mere obstacles spit out procedurally by the computer for variety’s sake, become abstract compositions tossed against random backgrounds. Randomization is a principle in roguelikes, but here it is also a visual theme. Look closely and you’ll notice how fragments of esoteric shapes are scattered across every square inch of the screen in impossible variations. There appears to be some kind of pattern unfolding in the pixels, but I imagine that, like hieroglyphs, few can translate it.

The music is likewise elusive—so sedative that I was barely aware of it until I made it far enough in the game to hear a dynamic change. It seems to hang eerily above the play field in a separate space, where slow exhalations of reverb bellow, rippling out from the rising and falling tones of an otherworldly organ, which are occasionally spattered with a discernible key or two and audio hiccups. It could be the sound of extraterrestrial whale calls, a mellow contrast to the hard logic of the abstract puzzle design below. But the music is also connected to the ideals of Rogue.

I’m 99.9-percent certain that the haunting music, like the game’s visual art, is composed on the fly by an algorithm shifting numbers around in the periphery.

I’m 90-percent certain we have been getting in @’s way.