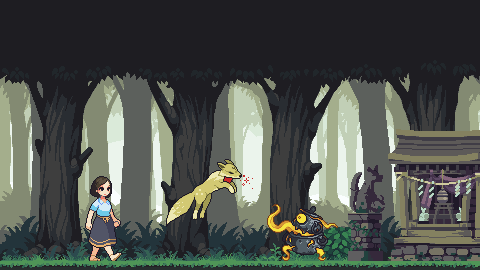 Japanese folklore is a pretty common inspiration when it comes to storytelling in videogames. From Clover Studio’s Ōkami (2006) to ZUN’s iconic Touhou Project, Japan’s mythological spirits and creatures provide a familiar backdrop for Japanese game makers to tell their own, new stories to their audience through the cultural legacy of Japan’s mythology.

But the upcoming action-adventure title Miyamori isn’t being made in Japan. Instead, the game features a production crew located across the Western world. Developed by Joshua Hurd, with pixel art from Lachlan Cartland, and promotional art by Kevin Hong, the game features a “folktale-inspired story about community, love, and loss” through Japan’s familiar mythical creatures.

The world draws directly from folklore found in Tōhoku

Miyamori takes place in the Tōhoku region of Honshu, located right in the Japanese countryside. When a young woman named Suzume finds her brother missing, she runs into a shrine guardian fox named Izuna. Izuna, as it turns out, is also looking for her missing shrine guardian partner: a fox named Gedo. Realizing their shared problem, the two proceed to team up with each other in order to figure out the mystery behind the sudden disappearances.

Miyamori‘s love for Japanese folklore can certainly be felt throughout its story and artwork. The world draws directly from folklore found in Tōhoku, with Hurd using such resources as The Book of Yōkai (2015) to carry out the game’s research. Not to mention, Miyamori relies on the traditional Shinto shrine as a cornerstone of the plot, with Izuna and Gedo taking on guardian roles for their shrine as kitsunes. Miyamori isn’t just interested in Japanese folklore; it embraces Japanese culture, and looks to honor and respect the people to which the game’s setting takes place.

Miyamori is planned for a Windows and potential Mac release, and the final version will be localized into Japanese. Players interested in following the game’s development can sign up for Miyamori‘s monthly newsletter through the game’s official website.