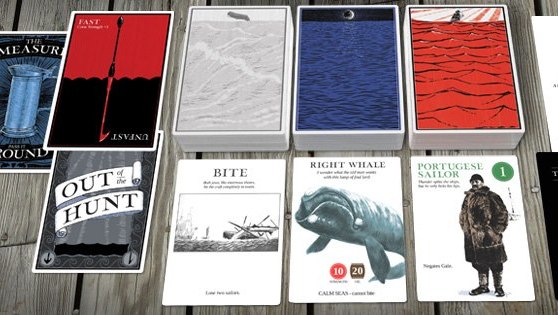 “It was the whiteness of the whale that above all things appalled me.”

Herman Melville’s classic 1851 anti-novel Moby-Dick: or, The Whale resides in the same cultural atmosphere as Dostoyevsky’s Crime and Punishment or Joyce’s Ulysses: big, important works beloved by those brave enough to take on the challenge, yet admired from afar by many too timid to scale their intimidating heights. Rife with adventure and derring-do, Ishmael’s epic journey aboard the whaleship Pequod lends itself to adaptation.

Captain Ahab, the vengeful seaman in deranged pursuit of the titular creature, is one of American fiction’s great tragic characters, a stand-in for our insatiable pride, our self-destructive lust for the impossible. Films especially have latched onto Melville’s extended metaphor. Those consumed by his quest enough to be called Ahab are legion: John Barrymoore (1930), Gregory Peck (1956), Jack Aranson (1978), Patrick Stewart (1998), Barry Bostwick (2010). Add Tavit Geudelekian to the list.

“”I’ve been called Ahab on more than one occasion,” Geudelekian, president of King Post Studios, admits. What madness warrants such a title? His company has turned Melville’s tome into a card game for two to four players. Moby Dick: or, The Card Game launched on Kickstarter today. Whether their three-year long journey sinks or swims is up to the public’s appetite for a 19th century examination of our place in the universe rendered down into three decks of playing cards, two dice, and a stack of tokens.

The project actually began as a videogame. King Post had made a number of iPhone games; Tavit himself worked for four years at Atari. Both he and creative director Joel Clark came up separately with an idea based on Melville’s epic. Imagine Shadow of the Colossus set on the high seas. The book’s hunting sections read like a boss fight already: sailors fighting 89-foot whales with nothing but a wooden stick topped with a bit of iron.

“It would have been this huge, enormous undertaking that maybe no one would have even bought.”

But with the technical fireworks needed to pull off such battles on a surging ocean, potential budgets ran into the millions. “It would have been this huge, enormous undertaking that maybe no one would have even bought,” Clark said. Then EA released Dante’s Inferno, a God of War-styled brawler stamped with Aligheri’s famed characters.

“We decided nothing we do with this book we’re so passionate about,” Geudelekian said, “should be as surface, or egregious a translation, as we thought Dante’s Inferno would be.”

With a resurgence in tabletop games’ popularity and the rise of crowdfunding, King Post Studios found the conditions were right to realize their passion project, albeit on a less expansive scale. The intimacy of a card game actually suits the world of Ishmael and Ahab. Sailors would often play dice and card games below deck to pass the time.

“The world is fucked. You can’t kill God.”

“[Playing Moby Dick] has this feel to it where you’re all sitting around, rolling dice and passing grog around,” Clark says. “It’s something that could be played on a boat.”

The game consists of three decks: The Sea, The Sailor, and The Whale. Play begins with flipping over a Sea card; think of this as looking out from the mast of the ship toward the water. If you spot a whale, you enter into a hunt, picking four Sailor cards to comprise your party, each with their own unique strengths and abilities. Each person then takes turns trying to strike the beast using rolls of the dice; before each turn, though, you select a card from The Whale deck in order to see which action the giant performs, including tail-slaps, bites, or attempted escapes. Producer Mark Perloff boils it down: “What you end up with is this really dynamic dance of death, between the sailors and the whale, as they both attempt to murder each other.”

Beyond the violence of the hunt, players earn currency by collecting oil, and oversee the relationships between your crew. Special chapter cards mark the passage of time, leading you closer to your doomed encounter with the White Whale. Snippets of Melville’s text are strewn throughout; the team wanted to showcase the poetry and lyricism often lost amongst the tedium of rope-coiling. Found images and daguerreotypes from the 19th century were used as inspiration, with art director John Kauderer giving each card the semblance of a wood-cut.

More than anything the game is about survival. Geudelekian compared the difficulty of picking up their title as somewhere between the ease of Settlers of Catan and the complexity of Magic: The Gathering. There are no wizards or demons found here: only the endless expanse of the sea and an indomitable creature bent on your destruction.

“In the language of the instructions, rule book, our marketing or our talking about the game, we never once mention and there’s never a way for any player to actually ‘win’ the game,” Geudelekian said. “Joel put his foot down immediately. He was like, ‘We’re making a game about Moby Dick? Great. Moby Dick kills everyone, every single time.’ And the survivor gets to say, ‘Call me Ishmael.’ There’s no winner. You just survive.”

“White is actually terrifying and evil.”

“The themes in this book are not easy to grapple with,” Clark says.  “It’s not going to end well. And that was a big struggle.” Most of the team comes from a games-centric background; they understood the importance of giving the player a compelling experience, filled with agency and reward. Coming from the world of theater and screenwriting, Clark saw things differently: “The world is fucked. You can’t kill God. And we were all on board with that as an atmospheric tone to the game. But it was really hard to stick to that and still make a satisfying game experience.”

“This book is just so enormous,” Clark says, “and there’s so much in there that there was no way we were going to get it all. I just hope we chose the right things.”

One such inclusion was an overarching design choice based on Melville’s treatise on whiteness, buried deep in an already dense chapter. “There’s been an historical misinterpretation as white as good,” Geudelekian says, paraphrasing the author. “White is actually terrifying and evil. We equated in our game, visually, [that] whiteness is danger. The blanker a card is, and the more white space a card has, the more it’s probably going to kill you.”

So that light we all chase will inevitably be that which destroys us? Sounds about right to me. If King Post Studios reaches their funding goal, you can have your own breakdown into madness (with friends!) this summer. Until then, swing by the nearest library and dust up on your harpooning.

To purchase or find out more about Moby Dick: or, The Card Game, visit their Kickstarter page. Tavit previously worked at Kill Screen before starting King Post.