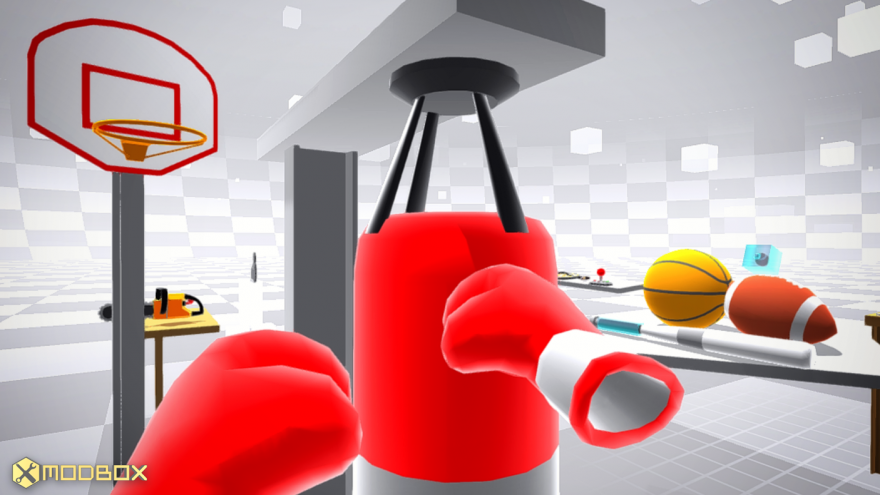 Imagine, if you will, a white empty volume. It’s a room. Now fill it with toys. Stuff ’em in there willy nilly. There’s a basketball, balloons, toy swords, bowling pins, propellers, nets, large die, colorful blocks to climb or topple over. Send a bunch of kids into this room and what do you think will happen? They’ll make up games as they play with each other and these toys, probably having the time of their lives. This is what Modbox will enable, except it all takes place in virtual reality, and that means no one has to clear up the mess afterwards.

Modbox is Alientrap’s VR debut and it shows. I mean that in a positive light. When studio head Lee Vermeulen first played around with the HTC Vive he didn’t have only one idea he wanted to develop for it but several. What stuck out for him about the Vive is that, not only can you move around somewhat freely (rather than having to sit down or stand still for the duration), but you grip a controller in each hand that lets you perform activities with intuitive precision. Experiencing this for the first time saw small “gimmicky ideas” popping off in his head. He wanted to swing a morning star around to destroy things, to stand in a batting cage with a baseball bat and hit things, and launch into a quick basketball mini-game. Modbox is a solution that lets them all exist.

Vermeulen teamed up with artist Harley Price and musician Ryan Roth but, before they stepped in, he started with a physics-based sandbox that let him play around with objects of different weights and materials. “I at first viewed it as just a Rube Goldberg machine creation game, but once we figured out how to allow for player locomotion and added all the toys it opened up to become a general game-making game,” Vermeulen says. “You can edit your level, set up some logic to have things spawn, then hit play to try it out, all online with friends.”

One of the tiny features in Modbox that makes a big difference to the overall play experience is that, in ‘edit mode’, you can have two objects touch each other, but when switching to ‘play mode’ they will act as if one body. This means you could stick a cube onto a sphere and end up with, uhh, whatever that is. Yeah… Cripes, I hope you’re more creative than me. Vermeulen talks it up better, saying that this feature along with the two controllers makes it easy to create complex creations. “In the past setting up this stuff with a keyboard and mouse was painful, it’s hard to position stuff right unless you have all the gizmos and shortcuts of a modelling program,” he says. “With this, though, you can just naturally position it and start wiring things together.”

If you’ve played any of Vermeulen’s other games, such as Capsized, Apotheon, or the upcoming Cryptark, you’ll know that he loves making 2D action spaces that encourage creative destruction. While Modbox is a first-person sandbox, it really isn’t that different to those other games. Everything is destructible in Modbox. You start with the primitives—basic 3D shapes—stick them together to form larger objects such as a table or a house, and then you decide what material they are. It might be metal, wood, or glass, and they each have a different look, density, and friction, but most importantly it determines how easily that object will break. Vermeulen tells me that it takes a massive amount of force to break the metal, making it clear he’s had a lot of fun trying to do exactly that. His argument is that the destruction makes the world more tangible. Which, yeah, I’m sure it does, but I think it’s obvious that Vermeulen put destruction in there as he likes to smash things with a hammer until they break.

Sure enough, it doesn’t take him long to get onto his tales of smiting inanimate objects with his new videogame powers. This happens when he’s telling me about the “toys,” which you can pick up and have replace your little robot pincers that represent your hands inside the game. “Guns, chainsaws, boxing gloves… I especially love the Chainsaw and Crossbow right now,” he says. “With the chainsaw you actually have to pull the ripcord to start it, which feels insanely cool. And with the Crossbow you have to pull back the string each shot. Everything having all these fun things to interact with is really satisfying.” 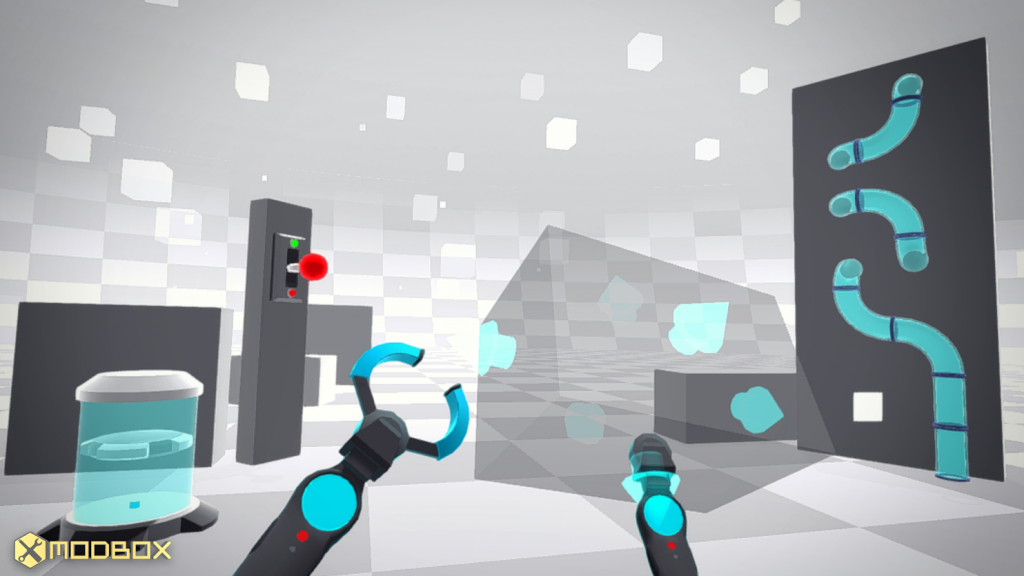 After having acquired a HTC Vive on October 15th, developed Modbox through November—but not before creating a destruction sandbox first, of course—Vermeulen’s work with virtual reality has moved quickly, and now the plan is to bring it to Steam before the HTC Vive launches publicly in early 2016. The reason for beating the virtual reality headset’s wider launch is due to wanting there to be user-made content already available for people to try out when they get to it. Yes, it will have Steam Workshop integration so you can create contraptions and then easily share them with everyone else who is playing.

Still, that isn’t the main appeal of Modbox. Vermeulen is clear about what he things that title belongs to. Hint: It’s the freedom to play however you want. “When I am playing with friends I don’t think I need some structured game with points and systems—all we need is toys and the environment to have fun,” he says. If we wanna play basketball all we need is a ball and a net, and we can keep the score.”

Modbox will be available on Steam for the HTC Vive in early 2016.