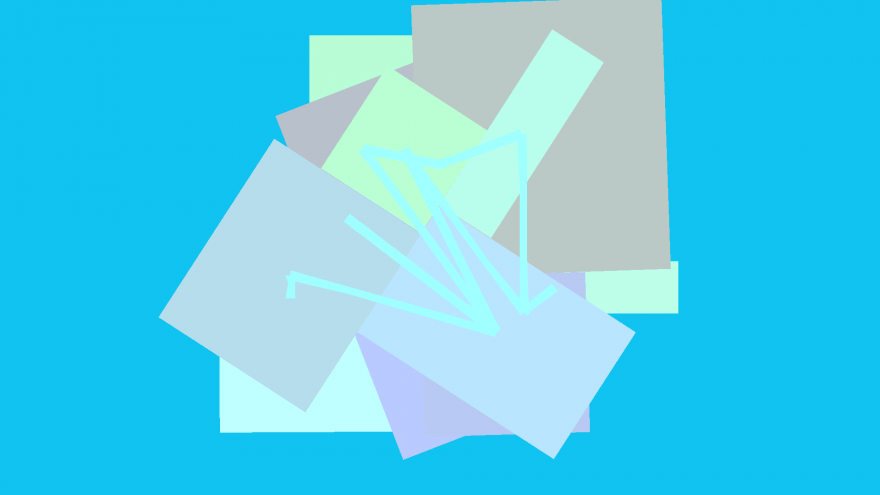 Manfred Mohr approaches computers as if a musical instrument. In fact, his career as a saxophonist for an improvised jazz band is often used by biographers and critics to draw this comparison. Mohr started creating algorithmic art in 1969 and he hasn’t stopped, meaning he’s approaching 50 years of tweaking computer code to generate what his website describes as “2-D semiotic graphic constructs using multidimensional hypercubes.”

It’s as complicated and mathematical as it sounds, but the results of Mohr’s computer drawings are less so, at least, in terms of visual construction. The most common sight is thick zig-zagging lines and bold kites of color, intersecting in drifting animation, sometimes satisfyingly locking together as solid 2D blocks.

exploring the higher dimensions of artistic expression contained within the hypercube.

Mohr’s digital art works seem to not be any expression of his own, instead belonging to the living gestures of a computer organism, which slowly writhes, transforming in its fluid form into various abstract bone shapes and flesh patterns. These are art works that are ever-changing, exploring the higher dimensions of artistic expression contained within the hypercube. More plainly: you can stare at them for hours, transfixed in a zen state, never quite able to grok all of the folding layers and motion pieces.

As with all art, Mohr’s own isn’t for everyone, but it’s pioneering nonetheless, and has surely inspired other artists to experiment with computers. One of those is the internet resident known only as “clyde”. He recently went to a Manfred Mohr exhibit, and came away inspired to recreate what he saw as an interactive ambient toy tribute he calls “Mohr“.

So far—it’s still a work-in-progress—Mohr lets you nudge a compact square of shapes to cause a slow explosion of form and intersecting layers that somewhat resembles Mohr’s work. You can continue to click on the shapes to push them around a little, but you have little agency and cannot contain or control the shapes to ascertain any artistic expression yourself. It’s more akin to poking a stirring beast, trying to get a grasp upon its behavior and form where none can be absolutely obtained.

didn’t initially have a goal, and wasn’t satisfied with what he had conjured up in just a few hours, but has since learned to enjoy the “study”, as he calls it, and is slowly working out what he’s trying to accomplish. There seem to be two possible directions he’s heading in: either he’s trying to bridge an appreciation of Mohr’s art for those who may not already by “incentivizing observation of [his] favorite aspects”; or he’s seeing how long he can avoid definition while he’s working on it.

It’s safe to say that Mohr is, appropriately, very experimental, then. The process of figuring out how to add subtle interaction to Mohr’s style of computer art, in a way that allows for observers to further appreciate it, is as much a playful toy as the end result is likely to be.