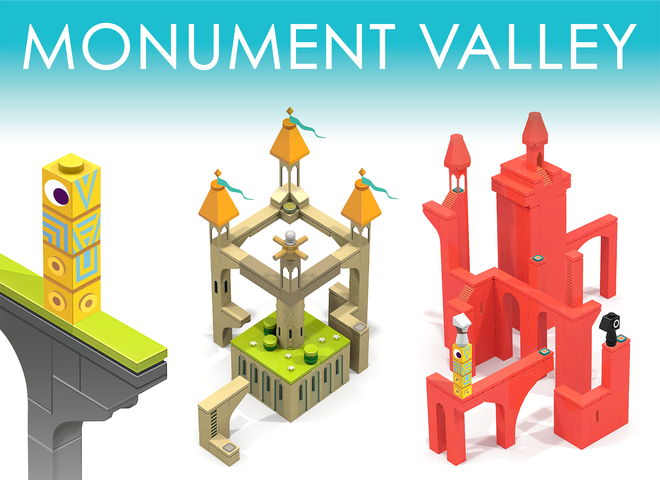 Monument Valley (2014) and Lego. It just feels right, doesn’t it? Maybe it’s that the puzzle game’s isometric perspective gives us the privileged view of god games, in which we build and destroy. Or perhaps more simply it’s the attention the game draws towards it brightly colored geometric mazes, eager for us to prod and spin them. Either way, there’s something about Monument Valley that makes it ripe for a transformation into modular Lego blocks. Now, there’s actually a chance of that happening.

The first step towards this end goal has been made through the proposal of a Monument Valley set over on Lego Ideas. Yes, it should have happened months ago. There should be Monument Valley blocks being pressed in Lego factories right now. But there isn’t. And there’s still no guarantee that it will happen, even with this Ideas pitch now existing. It requires tens of thousands of people actively supporting the pitch on the Lego Ideas website to even get it accepted by Lego. Right now, it’s only recently stepped over the 1,000 mark, with 500-odd days left to get the rest.

It’s a long way off. But have faith: This is how the Minecraft (2011) Lego set was born (among many others), and look at it now—an essential part of the entire Lego brand. Monument Valley is surely widely loved enough to get similar treatment. Even if you’re not familiar with the game the aesthetic has a broad appeal. The tomato-red arches, the indented ladders,  the clean corners of rotating walkways that slot into position with a satisfying perfection; it’s all gorgeous. Not to mention the cute-as-heck characters that navigate these dioramas. Especially Totem. Everyone loves Totem and that big googly eye.

the Monument Valley Lego set would have “illusion stickers”

But there’s more to the game and this proposed Lego set than just that. If you’ve played Monument Valley, you’ll know that its puzzles have a basis in the graphic art of M. C. Escher. It’s all optical illusions, architectural sleight-of-hand, labyrinthine trickery. Of course, plucking all of this out of its digital format means that the impossible parts of these illusions are lost. Actually, not quite. For the Monument Valley Lego set would have “illusion stickers” that give the impression that the sacred pillars have different forms when viewed from the front and side. Pretty swish.

You can support the Monument Valley Lego set over on Lego Ideas.