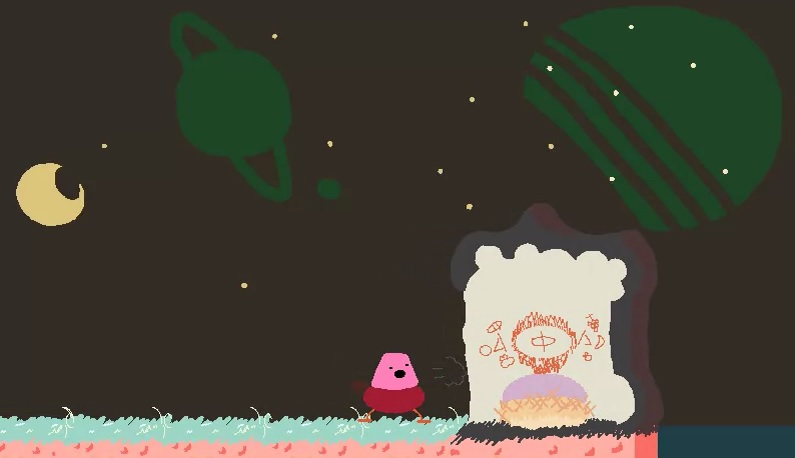 Braingale is a collective of like-minded artists who produce music, illustrations, videogames, zines, computer art, and just about anything that takes their creative fancy. Every now and then, they release collaborative EPs as a free download.

The Architects EP is the second publicly available collection from the group, and contains a 7-song and 12-song album, a handful of strange games with titles like “Marble Safari” and “Inheriting The Beast,” and there’s even a “Trainimation” to watch.

originally it was going to be like a Tamagotchi where the chat watches it and learns how it works.

Of the creations in the pack, the game called Monument by Mushbuh is only available as a soundtrack currently. It will be playable, however, on Saturday, April 26th, at at twitch.tv/mushbuh. Yep: Monument is a game meant to be played by multiple players at once through the chat on a livestreaming channel, just like Twitch Plays Pokemon.

“It’s a videogame made in Haxe and you’re a swaacl, which is a lil dude that swaccls around. You eat fruit—there’s 1/100 chance of growing a pizza—you can lay an egg, do some other things, and then make a monument of yourself,” Mushbuh told me.

“If I played it myself it would take, like, literally a minute to beat. But as it’s intended to be played through Twitch, people will spam the controls.”

Mushbuh says he got thinking about making a Twitch game after fellow Braingale member Sean Hogan created a level editor add-on for his game Even The Ocean. The level editor was operated through the Twitch chat.

I asked how this level editor inspired Mushbuh and led to the creation of Monument.

“Well, originally it was going to be like a Tamagotchi where the chat watches it and learns how it works. I made a Tamagotchi game for a Ludum Dare once, but it was pretty lame; I had the flu that weekend so I only worked like an hour on it.

“But the idea behind that was that there were no instructions and you had to figure it out, which I think would be more interesting for a Twitch game. Like, get rid of a streamer playing and only have the viewers playing. That’s the thing I liked about Twitch Plays Pokemon.”

I’m also told that there is a surprise for everyone who plays Monument. It should appear upon completion of the game. So, if you want to find out what that surprise is, as well as work with your fellow humans to operate the swaacl, tune into twitch.tv/mushbuh at on Saturday.