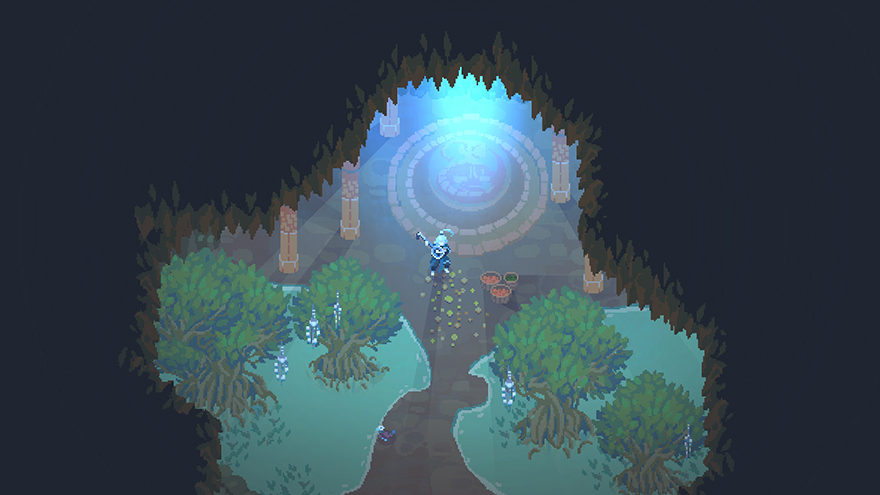 Our ancestors courageously spoke their minds, fought against tyranny, ended wars, and along the way also probably made a lot of really stupid mistakes. Just because we don’t care as much about our time-honored heroes’ failures doesn’t mean they didn’t happen, it just proves that history has a way of selective forgetfulness.

The truth? Our legends aren’t always necessarily as legendary as we’d have liked them to have been. Johnny Appleseed’s countless apple trees bore mostly inedible fruit, designed to produce lucrative cider, rather than out of an altruistic goal to feed the masses. Paul Revere may have ridden to alert his fellow revolutionaries of the coming British soldiers, but his role in the ordeal was minimal at best; his ride wasn’t even mentioned in his own obituary.

like most board games, it remains entertaining when pulled out periodically

In the same way, Moon Hunters makes it easy to forget the moments when you cheesed your way through waves of monsters with the same overpowered moves, instead hailing your strongest moments of decisiveness as legends for the ages.

A co-op, roguelike RPG at its core, Moon Hunters lets up to four players choose from six different heroes of varying backgrounds and strengths—a wandering swordsman from the mountains, a dark mage adorned in skulls, or a silver-haired songstress, for example—and set out on their journey. In its fantasy world of Issaria, the moon has vanished, and the vicious Sun Cult has threatened to kill all nonbelievers in five days. Our heroes must find a way to bring the moon back, and the game is upfront with the fact that you will most likely not succeed. Depending upon choices made throughout the game, as well as the outcome of the final battle, our warriors’ fateful days can come to a variety of endings

Rather than hew to typical roguelike punishment for death—resetting the entire game from scratch upon restarting—Moon Hunters elevates itself beyond similar randomly-generated titles by making your choices live on in the folklore of the world of Issaria. After those five days have passed, each player is rewarded with a constellation and legend describing who each character was in the hearts and minds of their fellow villagers.

Astrologically speaking, the generated legends and constellations spun from each playthrough are about as accurate as your typical horoscope—sure, there are some similarities in what’s on the page to what actually happened if you squint at it. Regardless, it imbues each playthrough with the feeling that you can play whatever role you choose—will you be a selfless warrior defending the righteous, a vengeful sexpot looking to destroy your enemies, or a mix between the two? Interactions with NPCs are often binary choices, but thankfully they don’t fall into the typical black or white dichotomy so prevalent in videogame morality choices. Which of these two princes is more handsome? Should the villager kill or tame the evil-looking bird? Depending on your answer, your character may be branded patient, proud, vengeful, or cunning, or something else entirely.

Moon Hunters may not be the perfect game, it nobly aims for the stars

Each playthrough proceeds like the rounds of a board game, with players choosing areas on the randomly-generated map to visit each day, and then picking a different skill-boosting job at camp each night. Consecutive playthroughs unlock more heroes and more types of level geography, from forests to mountain tops to deserts. Moon Hunters strives to be a bite-sized epic and in that it succeeds. One entire journey typically takes around 30 minutes, encouraging players to try again, tell another tale, and create a new myth. That said, like most board games, it remains entertaining when pulled out periodically. Plowing through the game to unlock every hero, costume, and other options would quickly grow tiresome.

While it’s possible to go it alone, Moon Hunters shines with a full group (the PS4 version supports local co-op, while PC players can connect online). Arcade-style controls ensure it remains approachable for players who aren’t even sure what the acronym “RPG” stands for, so gathering together your band of heroes should be relatively easy. Varying combinations of characters leads to different experiences, with some warriors more suited to long-range attacks or support, and others need to get in close. The combat itself is a lightweight, button-mashing affair, with a few overpowered characters able to make relatively short work of the challenges thrown at them. However, group playthroughs make decisions somewhat arbitrary, as choices that affect the group boil down essentially to coin tosses. For a title so dependent on group play, the resulting legends are singularly focused and seem to ignore the group dynamic. Romulus and Remus both created Rome, and Orion hunts the Ursa Major through the night sky, yet our heroes tales are spun with only their sole actions in mind.

Legends, as we think of them, are often times passed down in misconstrued, exaggerated forms, taking sometimes everyday occurrences and elevating them to mythical proportions. Lady Godiva never actually rode her horse nude through a town, nobody seems sure whether King Arthur or Robin Hood really existed, and not only did William Tell never shoot an apple off of his son’s head, there’s a whole list of marksmen who supposedly did it. But does that matter? We look to our legends for inspiration and hope, not for historical fact. Just the same, while Moon Hunters may not be the perfect game, it nobly aims for the stars, and for that alone it is memorable.