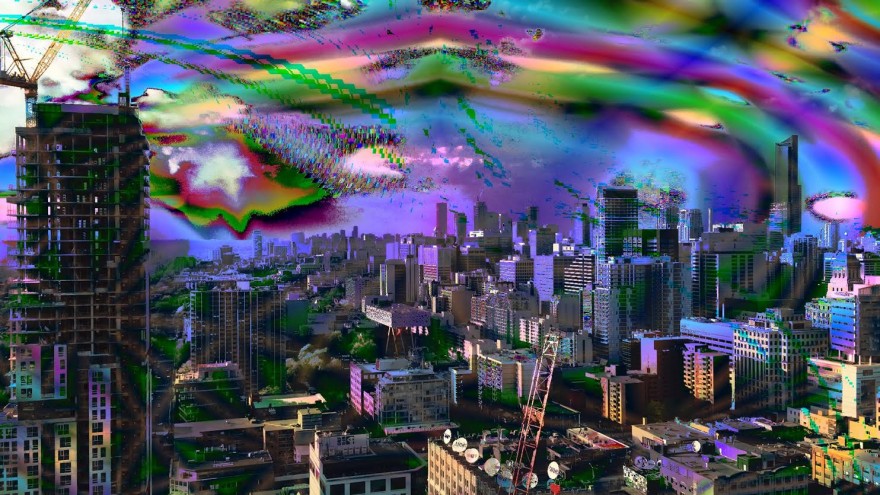 Connor Bell obviously wants to live in a visually fragmented world composed of data glitches. One of psychedelic blemishes and askew electronics that bend canvasses into a lively state of decay would suit him. I know this because Bell is the co-creator of Glitch Wizard, which lets you frazzle photos, videos, and gifs as if it were the hacker’s preferred version of Instagram (and it may well be).

But not only that. For the past few weeks, Bell has been letting me play around with another project of his, and it’s not unlike his last, this time being called Moon Shadow. While that title is certainly more mysterious than “Glitch Wizard,” once you start thumbing around with it on your touchscreen it’s immediately obvious what it’s all about.

something ungodly fidgeting around on the screen.

“The app blends a live video feed with a series of generative video shader effects on different portions of the image selected by color matching,” Bell explained. “The concatenation of unique, non-deterministic effects creates a unique representation of the users perspective.”

In other words, you point your smartphone at whatever’s in front of you, and then warp the camera feed with hand-picked layers of discoloration and visual deformities. Net artists and graphics programmers such as Cale Bradbury and Devin Horsman have contributed to the range of shader effects available to choose from. One called “NETGRIND” plasters large tie-dye stars onto whatever color of surface you apply it to. Another called “CANDY” casts pinstripe patterns of tootie-frootie colors over walls and ceilings if you wish. It gave my apartment a saccharine coat thick enough to tempt Hansel and Gretel to my door, I’m sure.

Then there are the less friendly tones, such as the shredded TV static of “VOID NOISE” and the black-and-white data streams of “BLIXY.” Combine the two and you have something ungodly fidgeting around on the screen. Flip the camera for a selfie and you’ll see you’ve been turned into demonic digital viscera.

It takes away the control that we have over the image

If you go far enough, stacking up filters without much thought, it’s akin to strapping on a pair of kaleidoscopes in front of your eyes. But Moon Shadow’s ability to have you assign filters to certain colors does encourage a more artistic hand. With or without that, it’s easy to overload the app, which sees serious slowdown on the frame rate of the camera feed, but then, the stuttering hardly feels out-of-place. This is real-time interaction is something that you don’t get as much with Glitch Wizard and it marks the difference between it and Moon Shadow.

Instead of disfiguring existing media with post-processing effects as in Glitch Wizard, what Moon Shadow enables is for you to apply filters prior to the creation of digital videos or photos. It takes away some of the control that we have over the image after it has been captured and favors experimenting with happenstance and accidents in the process of manufacturing the image.

This also makes it feel a little more personal. Glitch Wizard is designed for you to share your media with others on social media once you’ve tweaked it to your liking. Whereas Moon Shadow is more of an interplay between you and the app that’s projected onto the live reality in front of you. It’s more true to the tradition of glitch art, which has always been formed by an accident realized through analog media, rather than produced with clear intention by the user.

You can download Moon Wizard for free on the App Store. It’s also coming to Android.