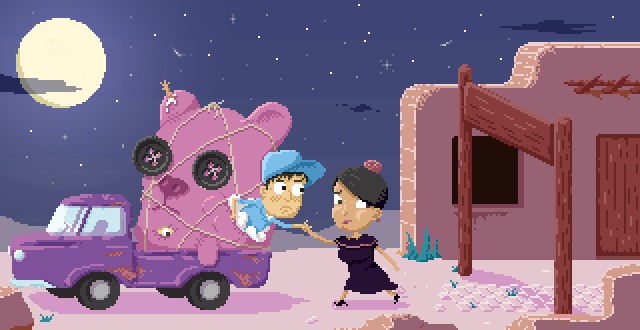 When I first heard about Smuggle Truck, it was from a well-meaning coworker at my non-profit office, where immigration law is one of our bread-and-butter issues. Concerned, she pointed me toward screens of this “insensitive” videogame where the player drives a truckload of cartoon immigrants through wacky desert landscapes.

Little did she know that Smuggle Truck is actually a biting satire of the American immigration system, made by a tiny team of people—Boston-based Owlchemy Labs. It’s a complete counterattack on the “serious game” paradigm of sober graphics, coalition banners strewn about the title screen, and not-so-subtle messages peppering simple gameplay. However, it also proved way too controversial for Apple’s App Store, and prompted the 11th-hour birth of a very special iOS version, Snuggle Truck, which replaced the immigrants with sickly-cute stuffed animals.

“During my schooling, I was never informed about immigration policies—how they worked, or what you had to go through to come into the country,” said Alex Schwartz, founder and “chief scientist” at Owlchemy Labs. “I guess, for those who are uneducated about it, it just seemed that anyone should be able to go anywhere, kind of as a concept, you know?”

On the day of the game’s launch, Schwartz gave me the whole messy, unorthodox story of Smuggle Truck’s development, from its conception at an immigration-themed game jam last summer all the way to its commercial release.

Tell me how you came to make this game.

I think, from a 10,000-foot view, game developers often create games about what’s going on personally in their lives, or what things are affecting them at that time. That’s what happened with Smuggle Truck—a friend of ours was having a lot of trouble trying to come to the United States, to just come here and try to make games. We weren’t too familiar with the immigration process, and let’s just say there’s no visa to come to the United States to make indie games. [Laughs]

So, we tried to help him out, and see how he could come over and make games with us. Basically, to try to rally support and raise awareness for the fact that we realized the immigration system in the U.S. is pretty shoddily put together, we made a game jam—which is when a bunch of people come together and create ideas for games in a weekend, in 24, 48 hours.

That was myself and Darren Torpey, who runs Boston Game Jams. The idea was, you have to make games about immigration—that’s the only rule. Basically, we said, “what could we do that could grab people’s attention, and so we thought, “Why don’t we go about it from the exact opposite side—instead of an educational game, we’ll go and make a satire.” So that’s where basically the idea formed. [That] was Smuggle Truck—and we’ve been working on it ever since the game jam where it was conceived.

With the choice to do satire, there’s that old saying about comedy being “complaining with charm.”

One of the things we were saying when we were designing it was that we didn’t want to be preachy. We just kind of presented a situation and you play in that space, you know? You’re driving around and there are these physics, and you have a goal—but we’re not saying, “Hey, legal immigration is this or that,” or “Illegals should be kicked out of the country,” or “Illegals should be allowed a million [dollars] every year” or anything like that. There’s no commentary on what we’re saying is correct or incorrect about the current law’s system.

The only commentary I think we had—which is pretty unanimous—is the “legal immigration screen” [an onscreen counter that ticks down 20 years in realtime]—just the whole wait period. I think everyone can agree that if you meet the qualifications legally to come to the U.S. as an immigrant, the fact that it takes so long is just absurd.  I think that is one thing that a lot of people can agree upon, that it’s so slow; so we could at least make fun of that!

But to say our political beliefs flat-out in the game, I think we would lose a lot of people, so I think the goal was to stir the discussion as opposed to giving a point of view.

Some of the laws are really ridiculous…

I think the keyword that you said there—“ridiculous”—that’s kind of where we got the idea. Why would you throw people in the back of a truck! I think it’s just to say, “OK, obviously this is a joke; there’s satire to it,” and we proved that people did understand the satire. I think it was unanimous, pretty much for everyone who played it—that they all got it.

And the whole controversy—that it was on big news, on Fox and things like that—I think that was based off of seeing the imagery, reacting, and thinking that it was a game that was trying to be provocative the wrong way. That’s where all the original negative press came in, saying: “Oh, this game is unacceptable,” and “Activists are opposed to this game,” and things like that. And slowly, it’s been—anyone that either inquires or talks to us—instantly, they understand!

So, why do you think there haven’t been more games that have taken a “serious” idea and presented it more light-heartedly? Smuggle Truck struck me as something that was unique in that regard.

I think the reason it’s not done as often, as we kind of found out through this whole process, is that it’s extremely hard to pull off. Subtlety really has to be employed throughout the entire development process. Down to the choices of how to represent the characters—we thought quite a bit about how we should show these characters. Should they have limbs? Should they have realistic faces or cartoon faces—things like that. Those kinds of choices—I think it’s not apparent to the user that we went through all these trials and tribulations to figure out what shade of which color to go ahead and put on this character to make it so that it didn’t have a certain stereotype to it, for example. I think that’s why it’s not done as much. It’s easy to go the serious route.

Do you think you can get a broader reach with satire because people are more likely to listen to your message if you make them laugh?

I think that if your trade is making games, then part of the goal as a game designer is to kind of go into areas that haven’t really been explored. So, I think part of why we did this was, “Let’s try to make games—which are usually associated with fun and light-heartedness—and touch on a serious subject.”