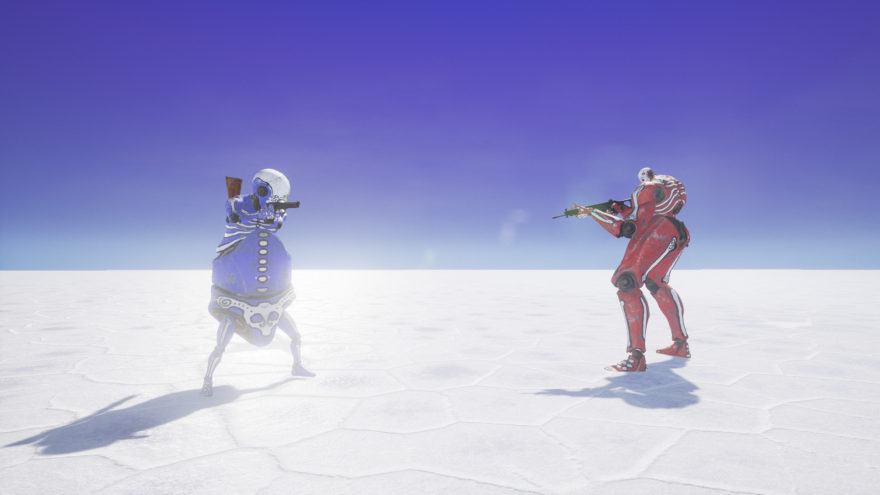 Morphies Law is a strange name for a strange game. It seems reasonable that the trailer for the game would also be bizarre (make sure you watch it below). It’s a game about shooting people and in doing so, shrinking the body parts you hit. And while they shrink, you grow. So, if you shoot someone in the legs, their legs will become smaller and your legs will become bigger.

Interestingly, the origin of Morphies Law involves the theory of evolution and Grim Fandango (1998). I doubt Charles Darwin and Tim Schafer ever imagined something like Morphies Law spawning off the back of their work. “I’m really fascinated by evolutionary theory,” said Jonathan Erhardt, the founder of Cosmoscope Games, which is the studio behind Morphies Law. Morphies Law is his idea, he created the initial prototype and now leads a small team in creating this bizarre shooter.

a love of unusual aesthetics

In 2014, Erhardt wrote an article about evolutionary theory and used a code cracking metaphor. “[After that] I began thinking about ways adaptation and (random or controlled) mutation could be used in games.” Eventually, this thinking led to the creation of the morphology system that is the core of Morphies Law.

And what about that name? When I first saw it I thought it was a typo. After I realized that it wasn’t I wondered about where such a strange name came from. The answer was surprisingly sensible. Morphies Law represents three different elements of the game. “Murphy’s law: ‘Anything that can go wrong, will go wrong’,” Erhardt explained, “in the game there are plenty of opportunities for unexpected and unlikely bad things to happen. Then there is the ‘morphing’ aspect in the name. And finally, it’s a weird law of nature of the game world that mass is transferred between people harming each other, and this law is called Morphies Law.”

As for why the characters in the trailer look like they are robots celebrating Day of The Dead—yep, you guessed it—this is an homage to Erhardt’s favorite game, Grim Fandango. But he was quick to point out that the robots in the trailer are not final. “The robot models you see are not final yet, but the robo day of the dead aspect is there to stay.” As Erhadt explained to me, he has a love of unusual aesthetics.

“a result of the physics + morphing system that surprised us all”

The unique look and gameplay of Morphies Law has created an interesting challenge for Erhardt and his team: they have to design levels that are fun and exciting to experience for players who might be smaller than a cat or larger than a house. The team at Cosmoscope Games is making sure every level has features that small and large players can take advantage of. For example, a hole in a wall that only a tiny player can go through allowing them to hide from bigger players.

As you might expect, a game like Morphies Law is going to be potentially filled with bugs. But not all bugs are bad, some are just funny. “The last bit of the [trailer] is actually a ‘bug’. We didn’t plan that players can kick each other around if they have huge feet. This is just a result of the physics + morphing system that surprised us all. So the laughs there are genuine.”

There is no release date yet for Morphies Law, Erhardt and his team are excited about the amount of attention the game is getting and they want to spend more time improving and polishing the game. So, for now, Morphies Law is still evolving.

You can find out more about Morphies Law over on its website.