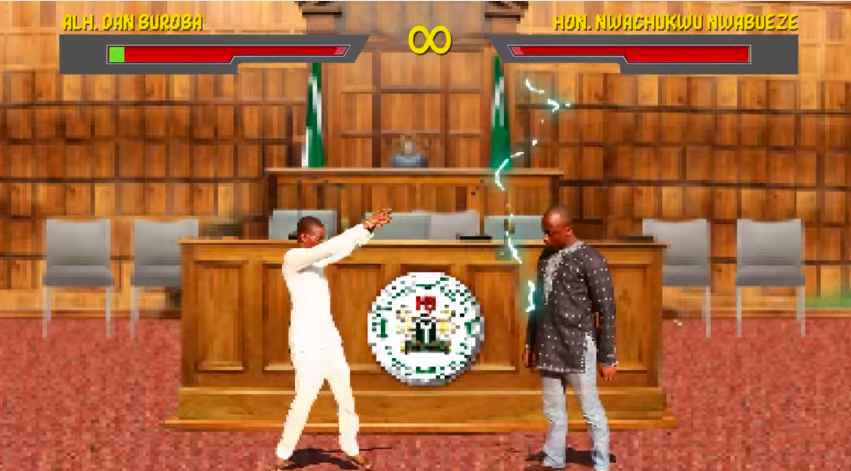 Nigeria, Africa’s largest exporter of oil, has recently been suffering from a severe oil shortage. The country’s fuel marketers and distributors have spent much of May on strike over government subsidies that have gone unpaid. In response to the strike, black market fuel prices have soared beyond the government’s mandated levels and businesses have suspended their operations. Even though the strike officially came to an end on Monday, Reuters reports that African telecom giant MTN Group is struggling to resume operations in Nigeria.

Oil shortages, particularly when they are accompanied by broader troubles, are not normally occasions for mirth. But don’t tell that to Kanso Ogbolu, who used the occasion as inspiration for a Mortal Kombat inspired spoof of Nigeria’s governmental dysfunction. In his minute-long video, members of the national assembly face off in their normal chamber, yet this time videogame-inspired scores are listed over their heads. Moreover, their moves, which range from swinging fists to chairs, echoing actual parliamentary brawls.

a brutally effective piece of satire.

Ogbolu’s satire ends with an attempted necklacing, the practice in which a person is wrapped in a car tire and lit ablaze. There’s only one catch: the fuel shortage has made it impossible to complete the necklacing. Though this ending spares the viewer from witnessing further violence, it pulls no punch. Ogbolu uses the language and history of videogames to create a brutally effective piece of satire. Unfortunately, the video doesn’t double as fuel.