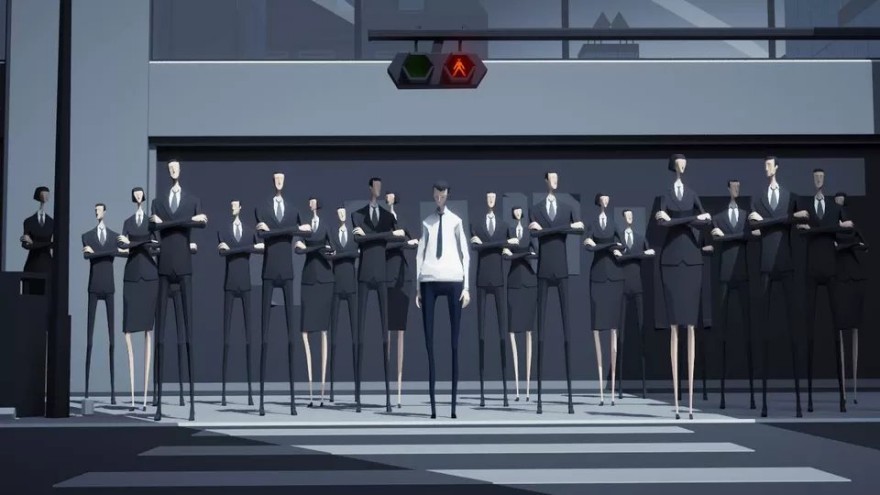 Kafkaesque. It’s a word whose usage in everyday conversation has inspired an unfair status as a self-effacing pejorative of pseudo-intellectualism. Believe it or not, Kafkaesque does retain a meaning apart from these misconceptions; a shorthand description of the soul-crushing drudgery and ineffectual bureaucratic tyranny found in the absurdist-nightmare fictions of, you guessed it, Franz Kafka. It’s a word that’s grown to typify the restless indignation of the individual working in the white-collar hive-mind of the 21st century, and it’s a word that aptly describes the tone of Krillbite Studio’s upcoming point-and-click adventure Mosaic.

you’ll start to realize that something is askew

In deciding to step away from the tried-and-proven success of its debut Among The Sleep (2014), Krillbite is attempting to explore the next evolutionary leap from the emotional horror of childhood: the malaise and existential surreality of being an adult. “It’s about being a small piece in this big machinery that you don’t feel anything for,” says artist Bjørnar Frøyse about Moasaic. “Games don’t have to be a kind of escapism […] they can leave you with something more than that.”

With a length currently sitting around three hours and a release slated for sometime next year, Mosaic is an attempt to do just that. As your day starts off like any other—passing through security, settling in front of your terminal—you’ll start to realize that something is askew about your respective role in this fluorescent-lit farm of cubicles. What answers might lie at the conclusion of this personal journey Krillbite won’t say, preferring instead to offer players as clean a slate of impressions as possible before diving through their first playthrough. Whatever other mysteries Mosaic might have in store for players, we’re sure to be left with at least a few clues to those answers leading up to the game’s release later next year.

Look out for updates on Mosaic over on its website.