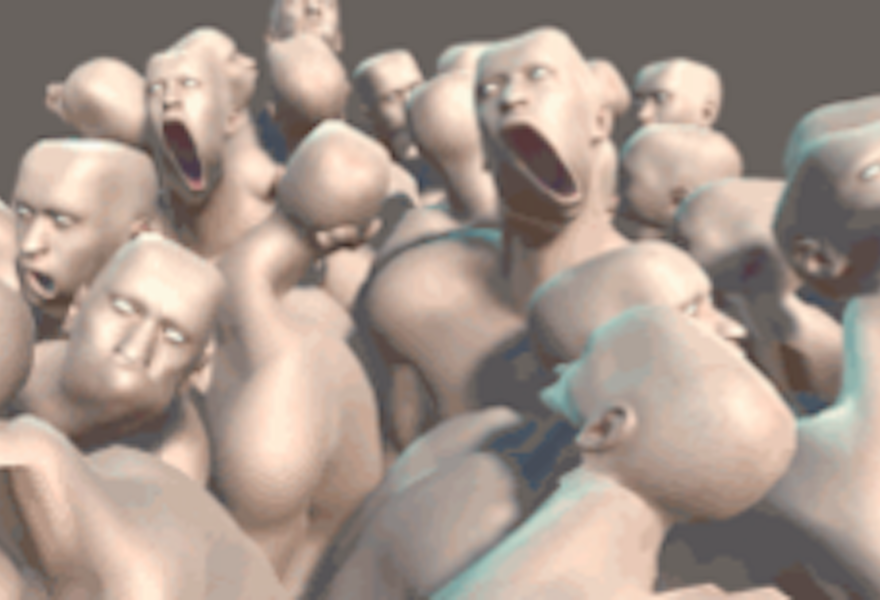 Having recently earned front page status on Reddit, I Have No Idea What I’m Doing: The Game is a virtual reality mosh pit simulator gone wrong, or so its creator Sos Sosowski claims. In it, hordes of creepy, slightly gelatinous men with no respect for personal space try to swarm you, leaving you awkwardly flailing your arms at them as you try to push them away. So, another day on Tinder, then?

I wanted to make a mosh pit simulator but it turned out really creepy! pic.twitter.com/CiTL8mZ6y0

As you can probably see from watching the gifs, Sosowski tells me that “there was no mosh pit game in the first place.” Rather, I Have No Idea What I’m Doing was born out of his recent experience visiting GDC, where he was inspired to start working with virtual reality after seeing what other game makers were doing with the platform. “I didn’t really want to work on VR,” he told me. “But when I went to GDC and saw all the hype and great ideas, I got really excited and wanted to try something too!” So he got his hands on an HTC Vive developer’s kit, rigged it up to control an old human model he had previously made for a zombie parody game, and started making it dance around like “a weird inverse kinematic human abomination.”

“should I have dinosaurs in my game?”

Dancing by oneself in VR can get lonely, though, so he added some more abominations to the game and set them to slowly wiggle towards him. After that, he then gave himself super strength to push away the encroaching horde of groovers, giving us the game as we can see it now. “It looked really nice, so I recorded a short gif and uploaded it to Twitter and Reddit,” he explains. “The entire process took no more than two hours, but the internet did not care about the process, and the internet exploded!”

You can now shoot chicken from your hands! pic.twitter.com/Vcgjr66Kzd

With the project’s newfound popularity, he’s since given it its own website, and has been hard at work recording more footage of it while also toying around with potential new features. “I have a million things in mind,” he tells me. “Like, should I have dinosaurs in my game? Should the enemies ride horses? I really, really have no idea what I’m doing.” The latest update to the game sees you shooting whole roast chickens from your hands.

The project isn’t Sosowski’s first time developing for virtual reality, as he had previously ported one of his older games—a parody of Proteus—to the Oculus Rift, but it is his first time developing a game specifically meant to be played in VR. As he explains, “I didn’t think ‘what kind of game can I force to work in VR,’” but rather, “what cool thing can I do in this virtual space with my head and my hands?” The result “immediately looked good,” he said, “as in VR is a ‘make it look good’ button that always works.”

I have no idea what I'm doing. pic.twitter.com/lPZIbKf4db

Even though the game wasn’t technically built with mosh pits in mind, Sos tells me that he loves mosh pits all the same, so much so that he even has a book of mosh pit paintings from artist Dan Witz. “My greatest achievement is surviving a mosh pit for the entire duration of a Vader concert during a 500,000 people music festival while wearing just a swimsuit,” he shared. “I was just one big bruise after bumping into all the leather-and-iron-clad hairy dudes :P” Unfortunately, since he’s currently recovering from a broken shoulder, he won’t be able to mosh for what he says will probably be another year. “But hey!” he laughed. “I still have the VR for that!”

Sos “truly hopes” that I Have No Idea What I’m Doing will be “the worst game ever.” You can keep up with it over on its website, and follow Sos’ work as a whole over on his Twitter, his YouTube Channel, and his personal website.