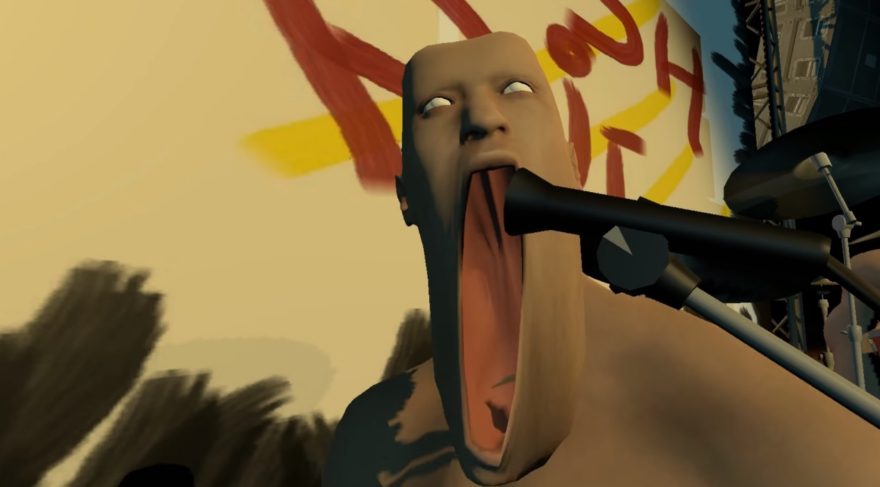 The human body is weird in alternatingly horrifying and hilarious ways, and sometimes both at once. This is true all of the time, but becomes all the more apparent in extreme situations such as sex or mosh pits.

That is the central intuition behind Mosh Pit Simulator, Sos Sosowski’s virtual reality game for which a new trailer was released on Monday. Intuition might be pushing it. As Michelle Ehrhardt previously reported for Kill Screen, the game was born out of happenstance and strange discoveries more than a linear plan. But here it is: a video of strange nude-ish bodies deforming, singing, dancing, falling, and jumping. It’s like a child’s book of gerunds but far creepier. As promised, it is weird in alternatingly horrifying and hilarious ways, and sometimes both at once.

For all that Mosh Pit Simulator is a collection of ghoulish poses—think Edvard Munch’s “The Scream” extended to the whole body—it is oddly compelling. The strange warping bodies, like the inflatable characters that stand in front of used car dealerships, are not actually scary. Instead, there’s the mystery of how they’ll deform next. (Spoiler: it’s oddly reminiscent of a melting candle and when that’s not the case it’s just plain odd.) All of which is to say that there is something endearing about these bodies. They are not attractive, but their exertions resonate with the viewer. Everyone looks silly in a concert’s mosh pit and nobody really cares, and the same holds true here. After a few viewings, the trailer becomes more liberating than horrifying; this is what everyone on the dance floor aspires to.

In that respect, Mosh Pit Simulator is tonally of a piece with Italian artist Alessandro Boezio’s “Temptation”. The surrealist white ceramic sculptures are formed of limbs folding in on one another, like a human centipede but less scatological. If you choose to think of Boezio’s works as collections of dismembered body parts (which, in a sense, they are), the experience is rather horrifying. But interpreting Boezio’s work as an act of horror is a choice, not an obligation. You can also choose to see “Temptation” as a somewhat silly collection of limbs—Twister for dismembered grown-ups. Crucially, the work encourages both interpretations. Mosh Pit Simulator, on this most recent evidence, is doing the same thing.

Watch the Most Pit Simulator trailer here. You can also check out its website.