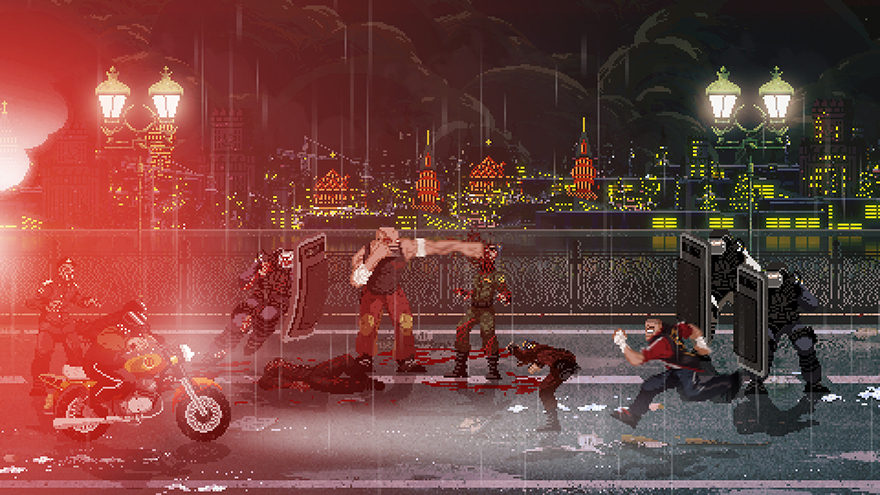 VHS cassettes were the ideal vessel for horror. The seams between fiction and reality were somehow hazier, hidden behind scanlines and stretched tape, allowing my imagination to magnify the terror of Gremlins (1984) and the murderous doll in Child’s Play (1988). A film like Ringu (1998), in which those horrors literally came out of the TV to kill you, was inevitable.

As VHS tapes warp and degrade they sully the story contained within, but also gain individual character. No two copies of the same film play exactly the same on VHS, especially as time lurches on. Eventually, the horror that tape may have once contained is warped beyond recognition: all that’s left is a screen of static fuzz. Similarly, while I can still watch those old horror flicks, their impact on me is greatly lessened these days. Like a video watched a thousand times until it’s eaten by the machine, repeated exposure to violence has numbed me to it. In both cases—the tape and my reaction to it—there’s a loss of purity. It may explain why many adults seek to properly terrify themselves; chasing a feeling they remember from childhood but have since lost due to increased exposure to savagery.

it’s a third-gen VHS copy of its influences

This is why I was drawn to the bloodshed of Mother Russia Bleeds. And while it didn’t stir my stomach, what did surprise me is that it left me contemplative after it was over, if only for a brief period. On paper and in previews, nothing about Mother Russia Bleeds indicates that it will leave much of a pensive mark, but it elucidates ferocity in a very specific and game-centric way. For hours I pulverized living creatures non-stop; unable to call myself a mere voyeur, I was a very active participant in the game’s violence. Battery became a zen-like reflexive instinct of punches that viscerally crackled bone, sprayed blood, and snapped heads into the air. There was just enough sensory reality to the brutality that, while on the surface I felt removed, there was a lingering subliminal registration.

Before you get to that point, Mother Russia Bleeds is exactly what you think it’s gonna be: a side-scrolling brawler best summed up as Streets of Rage (1991) cold-cocking Hotline Miami (2012). It features displaced Romany street boxers in an alternate 1986 Russia smeared with VHS tape warble, pixelated bodily fluids, and crunching skulls. Right from the start it stands out for having a thunderous punchfeel that is alarmingly satisfying.

Despite the gratifying fisticuffs, Mother Russia Bleeds is unsurprisingly hollow—given that this is a game about punching everything you see. Its world is dichotomously sculpted from the template of low-budget 80s action sci-fi flicks and the 11-o’clock-news fearmongering lexicon of societal collapse, political mistrust, and drugs. It establishes a dystopia of severe disparity, starring cardboard characters who all punch in slightly different ways but otherwise utter the same dialog in a simplistic battle between the have-nots and the oligarchy—all of which is to say it’s a movie about #Occupy as done by Troma. Though it’s clear the narrative is not this game’s true ambition, violence is inherently a political display of power, but Mother Russia Bleeds courts the discourse of shock without acknowledging that.

You are tasked with brutalizing hobos, prisoner gangsters, and skinheads while actively ignoring your shared predicament under the heel of the state; they are merely fodder for your knuckles, body bags that occasionally and insipidly curse according to their stereotyped lack of civility. There are also mutated prison guards, emotionless soldiers, and corrupt government officials so thinly drawn so as to barely qualify as rote; monsters, one and all, fit only for obliteration. And finally the player is forcibly addicted to Nekro, an injected drug that can also be siphoned from the addicts and scumbags you face which can heal and grant the berserker strength to pop heads in one swing. You are fighting the entirety of Russia and your addiction to this narcotic throughout the game, with little reason or rationale.

it left me contemplative after it was over, if only for a brief period

Which isn’t to say that this game is apolitical; it merely presents an elementary anti-government sentiment rather than says anything with it. Mother Russia Bleeds is perhaps too astute of a tribute to bargain-bin action movies with the barest thread of a premise (Nuclear waste is bad! Communism will destroy us! America is #1) that are then propelled through the plot with pure insanity and chaos. Whereas Hotline Miami was aspiring to Miami Vice as done by David Lynch, Mother Russia Bleeds asks only that you cruise a slip-n-slide of guts straight down a hill of revenge. 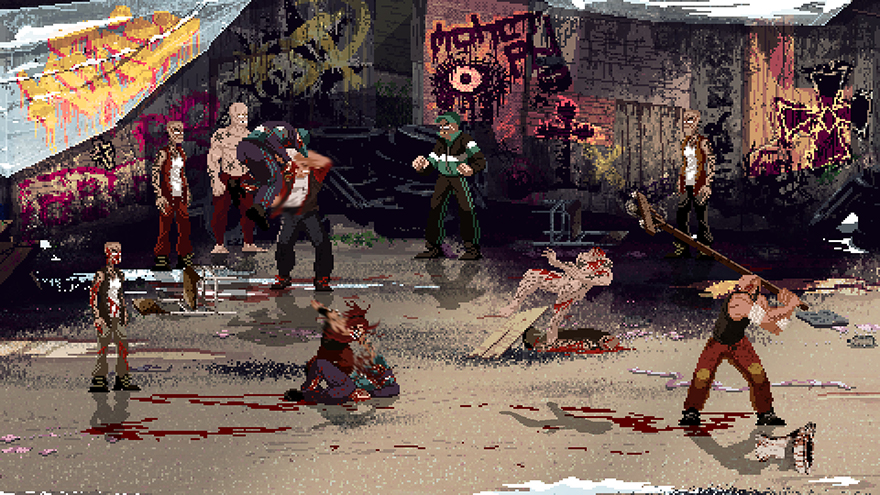 What may be surprising is that Mother Russia Bleeds isn’t the most extreme game out there. For all intents and purposes, it wants to be. But others, like Alien: Isolation (2014) and Manhunt (2003), are more psychologically terrifying, and the various Grand Theft Auto games give the player many opportunities for random sadism. Neither is it any more offensive than Hotline Miami; they are both deliberately oversaturated. What Mother Russia Bleeds does have is a couple of cheap tricks meant to shock you: demanding that you curb-stomp otherwise adorable attack dogs and mottled swine that exist to serve as meaty Nekro batteries. Even the brief spots where you shoot guns are invertedly tame since the slaughter comes so easily when you’ve given bullets. Which is a surprising thing to have to say. In truth, the ballistic sections only reinforce the strength of Mother Russia Bleeds; its throbbing viciousness. This game is at its best and worst when you’re on your knees slamming faces into asphalt with your own bandaged fists.

Still, after going through all that, what I remember most about my time with the game is that immediate post-game spell of introspection. Perhaps even thinking on this game so much has already distorted my memory from the actuality of the game’s sadism, stretching a mountain of bodies out of a molehill of severed sinew. The most flattering description I can offer Mother Russia Bleeds is that of an enjoyably formulaic brawler, but the ferocity of its execution was refined enough to get lodged in my head. I can’t quite work it out: it exists like a ringing in my ears that has no obvious source. Or, rather, it’s a third-gen VHS copy of its influences, a quavery deja vu of a violent brawler both familiar and unsettling.