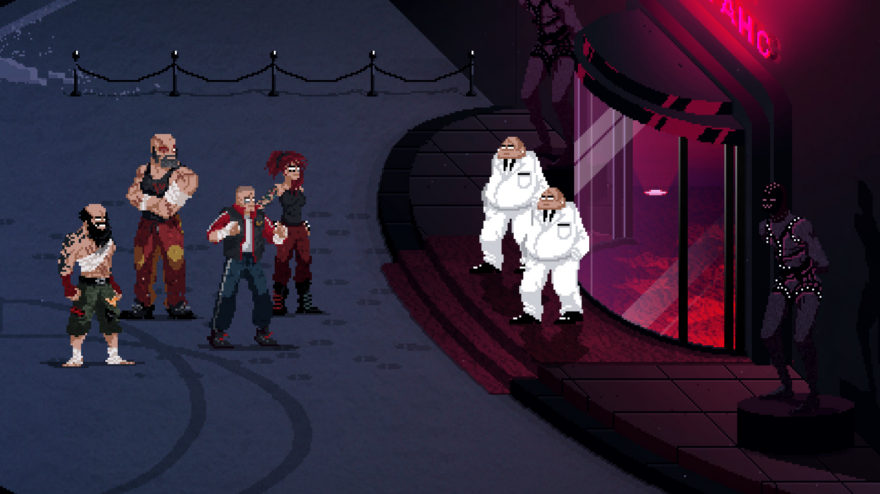 Devolver Digital’s new(ish) publish is crowned by the hammer and sickle, the symbol made famous by the Soviet Union, but in place of the hammer is a golden syringe. A look at the game itself sees dark corridors, growling dogs, ripped bouncers, and lots of bodies. Mother Russia Bleeds, or rather, MOTHER RUSSIA BLEEDS, is a beat-’em-up in the most earnest interpretation of the term. The latest news is that it’s due out September 5th for PC and coming to PlayStation 4 at a later date.

It’s supercharged to Hotline Miami (2012) levels of violence, and set against the backdrop of the former U.S.S.R. We’ve come a long way from Streets of Rage (1991): Mother Russia Bleeds is all about bloody glory, and this time, we’ve got enough pixels to see it.

There’s a plot somewhere in the game

It’s been in development by French studio Le Cartel since 2014, and I presume all that time was spent working on the viscera and squelch noises, as well as on the decision of what ubiquitously Russian names to use (they ended up deciding on Sergei, Ivan, Natasha and Boris, crowdsourced from their fans).


There’s a plot somewhere in the game, obviously, something about drug addicts and jail and vengeance, but more importantly you can kill stuff for hours and hours and hours. There are bonus difficulties—survival and boss rush—plus local co-op for up to four people, so you can kill stuff with friends, too. You’re also able to go into berserk mode from drugs that you extract from the corpses of people you kill, which is a surprisingly BioShock (2007) twist to a genre that was made popular by Final Fight (1989). Probably something to do with that plot thing. Back to killing.

Mother Russia Bleeds‘s goal, amid all the carnage, is to freshen up the beat-em’-up. As a genre it has languished, occasionally explored by something like Guacamelee! (2013) but much more often abandoned in favor of the hack-n’-slash or the shooter. Le Cartel wants to change that. And if the action holds up as much as the gore, it just might work.

Mother Russia Bleeds is out September 5th for PC. It’s coming to PS4 later this year. You can find out more on its website.