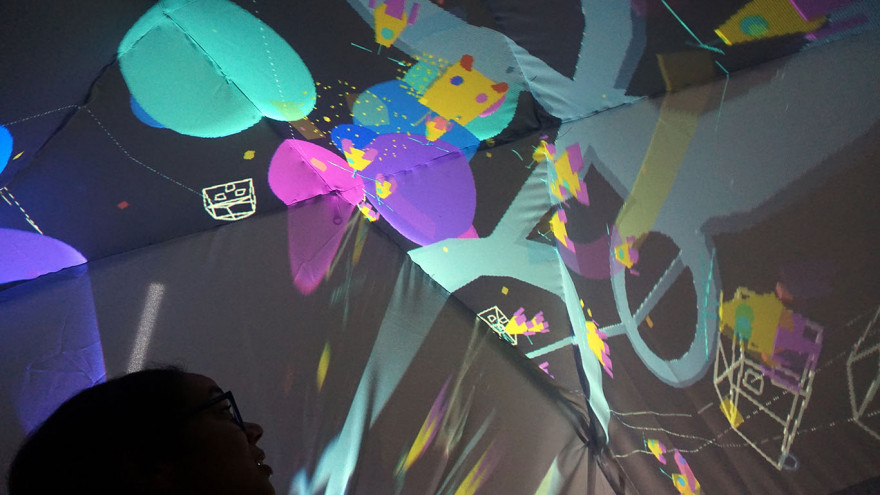 Did you ever have a magical night mobile to lull you in the crib? Mine sprinkled blue stars and pale planets across my polystyrene ceiling to a lazy tune. Thinking about it, it would probably be beneficial for anyone who struggles to get to sleep as an adult to push aside the sleeping pills in favor of a night mobile. I think we could all enjoy the wonderment they bring, actually. It’d probably be a relief to retire all the expectations of adult behavior and go to sleep surrounded by cuddly toys, looking up at a galaxy swirling above us, secure and comforted. Maybe that’s why Mouffe has such great appeal.

visuals and sounds morph as if part of a shared reverie.

Mouffe is a daydream simulator played in a tent with a blanket controller. It was made in a month as part of an experimental games incubator at Concordia University called “Critical Hit.” You slip inside, lie down on a soft quilt, and admire as splashes of color form an abstract animation projected on to the tent’s ceiling. Putting pressure on different parts of the blanket has the visuals and sounds morph as if part of a shared reverie. Its combination of visual, aural, and tactile stimulation is intimate and playful.

Sounds lovely, doesn’t it? Almost as fascinating as being inside that tent and experiencing all of this is the story of how Mouffe came to be. Its small team of creators had to cast themselves back to their childhood more than once during the process.

At its prototype stage, Mouffe was 2D and played on a screen that was precariously taped to the ceiling. The blanket controller was there from the beginning alongside the idea of touching a button to change the visuals. But Mouffe didn’t really take shape until the team built it to operate inside a tent. “It felt so right being in an enclosed, comfy, magical, light show dome,” artist and animator Hamish Lambert told me.

“the sky would open up above you into a different dimension”

To explicate the feelings that the tent had introduced, each team member had to rethink their approach, including Zachary Soares who was working on the sound for Mouffe. His problem was that the instruments he had to hand only produced ill-fitting digital and choppy sounds. Nothing he tried with them worked. Luckily, the answer Soares sought was playing in his ears the whole time, as the team was listening to the soft acoustics and calming tunes of Lullatone while working on Mouffe.

“[Lullatone‘s] little trick was using toy instruments for some of their sounds and I figured it wouldn’t hurt trying it on Mouffe,” Soares said. This is why he headed out one day to buy a range of children’s toys. “In the end, it worked out great! Adding in some extended sounds, giving off an ominous and large feeling made it all the better,” Soares added.

Working on Mouffe‘s art was Lambert (mentioned above) and Ben Swinden, who also programmed it. Lambert’s background in animation allowed him to bring in influences such as the blossoming, whimsical work of David OReilly and Chris Morphitis. “We were interested in creating this large space, so that you would go into the tent and the sky would open up above you into a different dimension,” Swinden said. Despite all of these aspirations, Lambert and Swinden struggled to match them with actual illustrations at first. This is why Kim Hoang, who did all the sewing work on Mouffe‘s blanket, stepped in.

“Kim had us do this drawing exercise that she did with children that she taught,” Swinden explained. “The idea was each of us had a sheet of paper and crayons and we had a minute to draw some kind of creature. Then we’d pass the sheets along and the next person would write an adjective and a verb to describe it. From there we talked about which ones we liked and Hamish took those and turned them into this weird playful world.”

connecting with the way children hear, see, and touch the world.

Hoang was under pressure herself with the blanket controller. It wasn’t for lack of inspiration or skill, but time. She was able to obtain a giant Tajima embroidery machine from the university, but not until the 11th hour. “It was definitely worth waiting for, because a lot of the super detailed work really relied on accurate sewing. The quilt buttons rely on a pretty specific interlacing of the positive and negative charges in order to work without the player holding the ground,” Hoang said.

“In the end, the most intricate patterns were done by me, and though I had to learn to set up vector files for the Tajima, it was ultimately a really cool process!”

The team affirms that creating Mouffe was as much a process of exploration and discovery as it is actually being inside the tent and experiencing it. There were some struggles, but they all found the fun in working through them and, for the most part all it required was connecting with the way children hear, see, and touch the world. That’s what Mouffe manages to capture.

“We never quite knew exactly what we were making but we were having a really good time doing it,” Lambert said. “I think that reflects well in the project. A lot of players aren’t exactly sure just what is going on inside this magic Mouffe tent but they have a blast doing whatever it is they’re doing.”

Mouffe is currently on Indiegogo where the team is seeking funds to make it portable, and to have other creators make projects for it.